There is only one beneficiary of Europe cutting of Russian gas – the United States. With this move, the US will lead the global LNG market and set its own steep prices.

Europe’s dependency on Russian natural gas has been a contentious issue for European Union (EU) policy makers for decades. Dozens of policies have been proposed over the years to diversify the continent’s gas supply, or to switch to green energy sources in order to minimize reliance on Russian gas.

There are only two ways to transport natural gas – via pipelines, or by liquifying the gas, transporting it as cargo, then re-gasifying it at the destination. Both processes require time and considerable infrastructure investment.

Pipelines: In 2021, Russian natural gas accounted for about 46 percent of the EU’s total natural gas imports with an amount of 155 bcm (billion cubic meters). Figure 1 shows that Russian pipelines provided about 41 percent (about 139 bcm) of these gas imports to the EU over the same period. 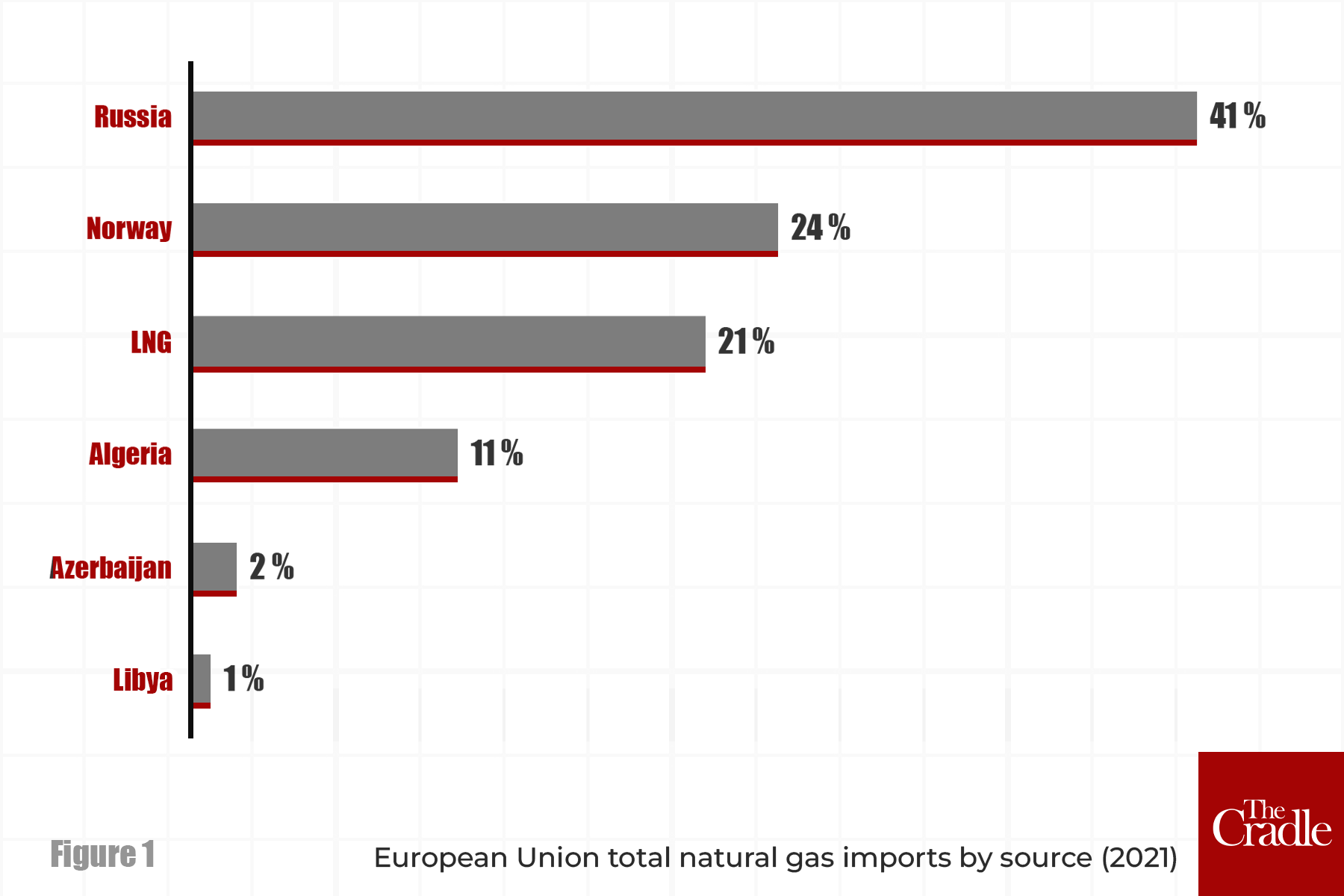 Figure 2 shows the sources for the LNG shipments that were imported by the EU in 2021. It is important to note that the United States represents the main supplier for LNG to the EU, and is likely to be the main beneficiary if Russian gas pipelines cease operations. The US only commenced exports of LNG to the EU in 2016, but rapidly reached 22.3 bcm in 2021, representing 23 percent of all LNG exports from the US. 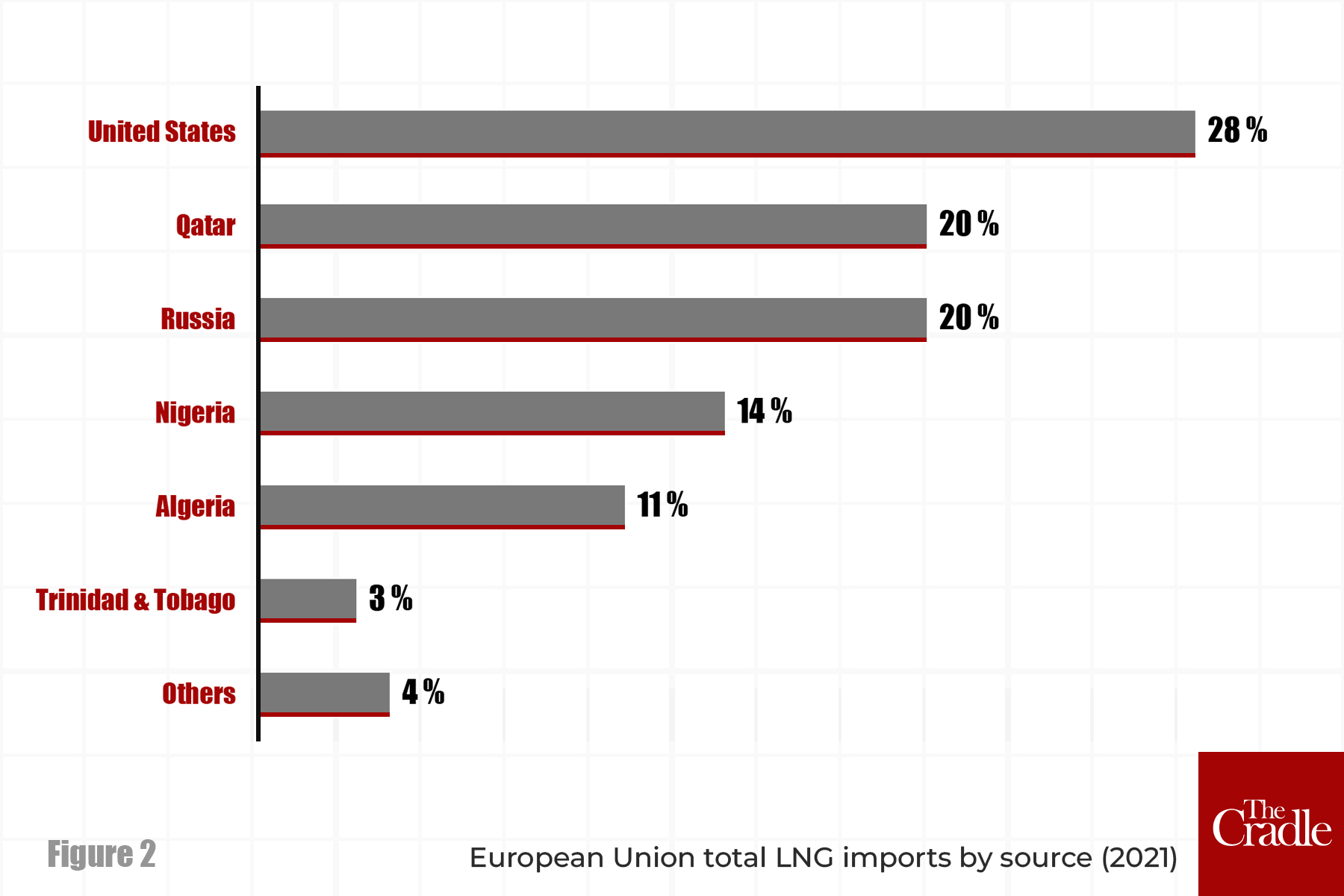 Before the conflict in Ukraine, Russia was still a major supplier for LNG in Europe with about 20 percent of the total LNG imports (equivalent to 16 bcm). This means the EU imported a total of 155 bcm of natural gas from Russia annually – 139 bcm via pipelines and 16 via LNG. This accounts for almost half of all European natural gas imports.

This strategic failure in achieving independence from Russian natural gas was mainly due to lack of a coherent and unified strategy among EU members. As shown in Figure 3 the dependency on Russian natural gas varies from one European country to another.

Countries like the Czech Republic, Slovakia, Latvia, Estonia, Finland, and Hungary are fully dependent on Russian natural gas, while the countries that import the largest quantities like Germany, France, Italy Poland, and Greece are semi-dependent, and countries like Portugal are quasi-independent. 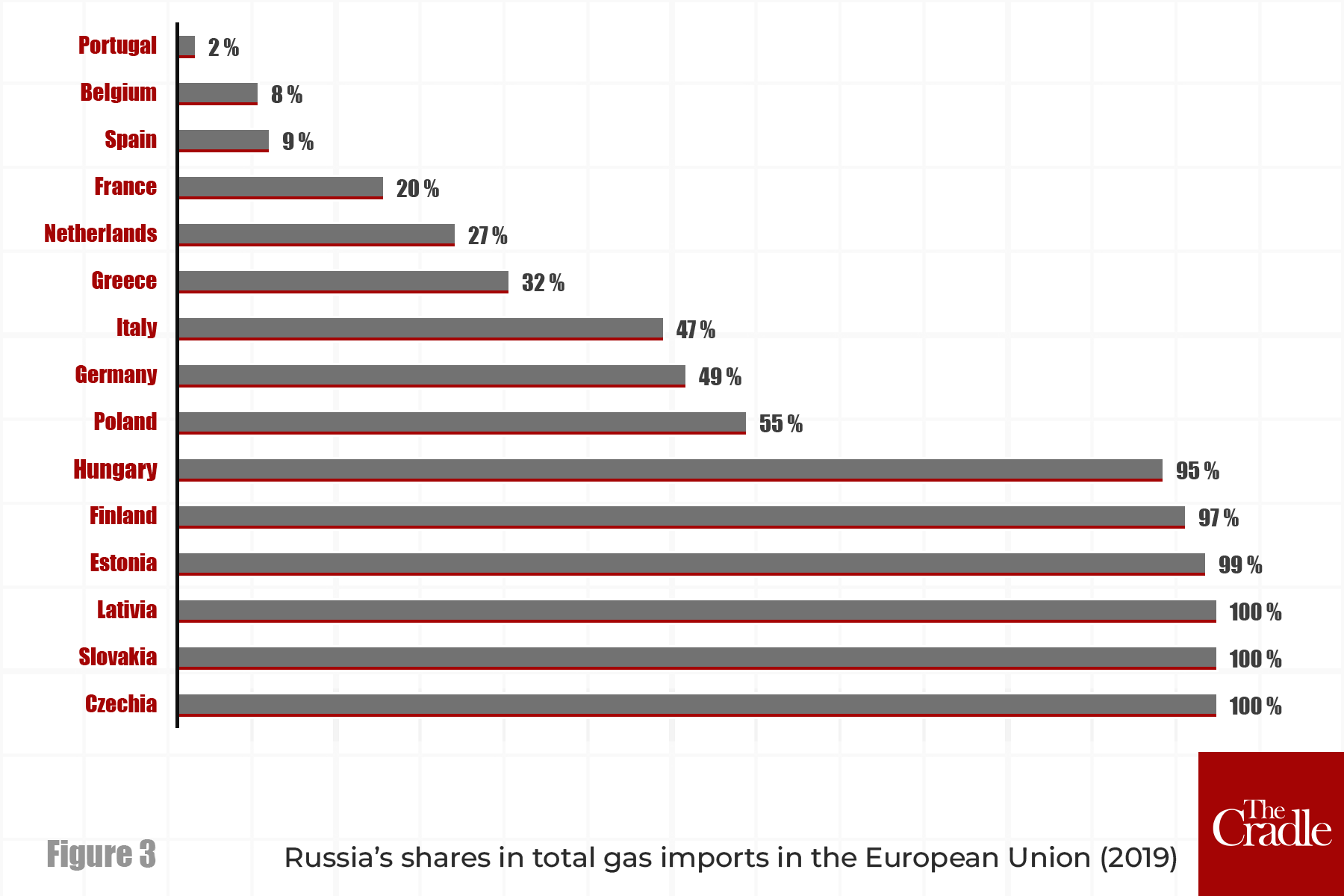 With intense pressure from Washington, this issue of over-reliance on Russian resources became further securitized following the conflict in Ukraine. Even after the west announced sanctions on Russian imports, the EU imported 39 billion euros worth of fossil fuel from Russia, until as recently as mid-May.

According to a Flash Eurobarometer survey for the European Commission (EC), 85 percent of Europeans believe that the EU should reduce its dependence on Russian gas and oil as soon as possible to support Ukraine. Meanwhile the EC, international agencies, and independent think tanks have proposed short term plans to decrease the EU’s dependence on Russian fossil fuels by the end of 2022.

The main three short term plans are the EC’s REPowerEU Plan under which two-thirds of Russian gas (101.5bcm/155bcm) could be replaced by next winter; the International Energy Agency’s (IEA) ten-point plan which proposes a one-third (50bcm / 155bcm) reduction of the Russian natural gas imports, finding alternative sources, and switching to renewable energy; and economic think tank Bruegel’s plan which says, in theory, the EU should be able “to replace Russian [gas] flows entirely,” even in the short term, by calculating Europe’s spare gas import capacity. Realistically, however, Bruegel calls for a reduction (86 bcm/155 bcm) by possibly switching electricity production to nuclear and coal, while applying energy saving policies.

Essentially, what these plans all have in common is a call for the EU to diversify its natural gas imports portfolio, switch to renewable energy, and apply policies for energy saving. Of the aforementioned plans, the REPowerEU strategy appears to be the most feasible.

To increase non-Russian gas supply by 63.5 bcm, the plan assumes the following can be achieved:

Complimentary to this, they also recommended reducing gas demand by 38 bcm. For this, they proposed 4 points:

The first problem with the EC study is that it expects the demand for gas in Europe in 2022 to remain the same as in 2021. Studies shows that the continent may need around 20-25 bcm more than in the same period last year. So, the target gas requirement is actually 121.5 – 126.5 bcm – not just replacing the Russian imports of 101.5 bcm.

The problem is that about half this spare capacity is concentrated in Spain and Portugal, which are linked to the rest of the EU with a pipeline of just 7.5 bcm/year capacity. Therefore, the EU has insufficient re-gasification plants to import an additional 50 bcm of LNG.

The proposed solution is to use the UK (now, officially outside the EU) – which has around 29 bcm spare regasification capacity – as a land bridge to import LNG and then reexport it to the EU via pipelines. In this scenario, the EU may succeed in importing an extra 50 bcm of LNG.

But even if Europe overcomes the regasification obstacle, is there enough LNG supply in the world to cover the demand?

Switching dependency from Russia to the US

Due to many export plants struggling with technical and feed gas issues during the year, global LNG export capacity actually declined in 2021, despite the continued rise in capacity in the US. At the beginning of 2022, it was estimated that the LNG global export capacity will increase by some 43 bcm if all plants that had technical issues and shutdowns were to come back online.

In the second quarter of this year, the International Energy Agency’s gas market report estimated that the EU’s LNG imports may increase by a maximum of 25 bcm and that 65 percent of this quantity will be supplied by the US.

If this transpires, US LNG exports will increase by a whopping 19 percent, making it the global leader of LNG exports overnight. Meanwhile, Africa, Europe, Central and South America and Eurasia will have smaller contributions to global LNG supply growth in 2022, while the supply of the Asia Pacific and West Asian regions are expected to decline.

If we take Qatar as an example, despite its leading role in LNG markets and close relations with western states, Qatar is unable to supply Europe with extra large quantities in the short term because it suffers from a lack of spare LNG export capacity. Furthermore, over 70 percent of these exports are sold to Asian buyers via long term contracts. Europe would have to wait until 2024-25 to be able to count on Qatari LNG supplies.

This high-level demand for LNG projected by Europe will saturate the market and increase the competition for flexible LNG cargoes. In order to attract more LNG cargoes, spot prices in Europe should be $2-3/MMBtu higher than the Asian markets. This is leveling now at $35/MMbtu for the rest of 2022 which is more than five times their five-year average.

The bottom line is that it will be impossible for the EU to increase their LNG imports by the crucial 50 bcm milestone. Even if the EU overcomes the technical issues represented by the regasification capacities and the interconnections between the EU countries and Britain, the supply in the global LNG market simply cannot meet the demand.

Although Europe may receive an extra 25 bcm of LNG, it will come attached to a very high price tag, while prices in North America will be largely unaffected. The US is the big winner in this scenario, raking in exorbitant profits while establishing itself as the world’s biggest LNG exporter. 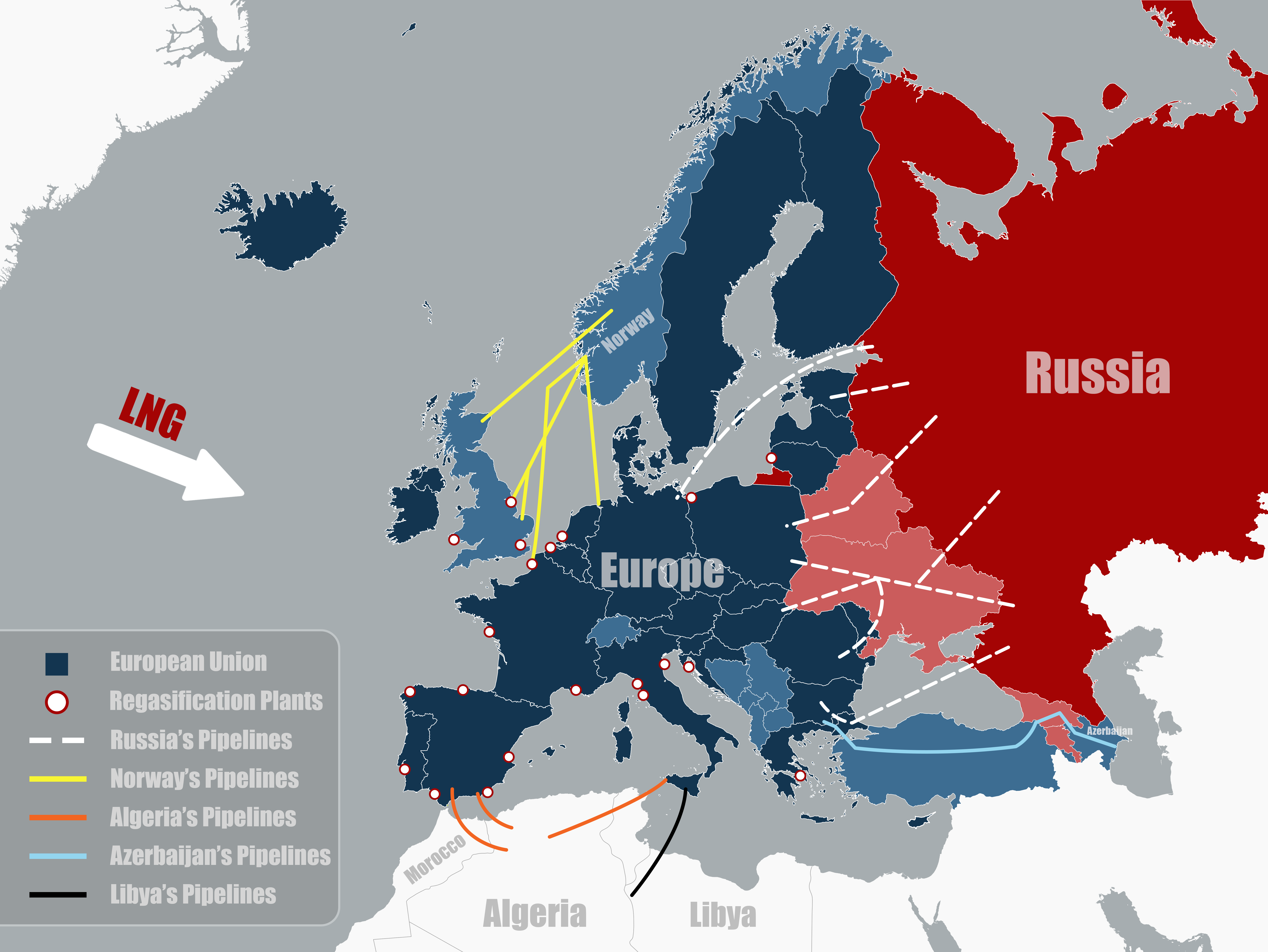 Where are the non-Russian gas pipelines?

Norway: As the main non-Russian gas supplier of natural gas to Europe via pipelines, Norway’s total capacity of supply is 94.3 bcm per year. Only 86.3 percent of this capacity was used in 2021, theoretically leaving 12.9 bcm of spare annual capacity.

However, in the first two quarters of 2022, the pipelines have been working close to effective full capacity, and this capacity is expected to be lower in the summer, as previous records indicate.

North Africa: The other source of pipeline natural gas to Europe is via three pipelines from North Africa: The Medgaz pipeline from Algeria to Spain, the Trans-Mediterranean Pipeline (also known as Transmed which carries Algerian gas from Tunisia to Italy), and the Green Stream pipeline, from Libya to Italy. A fourth pipeline, the Gas Pipeline Maghreb-Europe (GME), runs from Algeria to Spain via Morocco, but has not been used since 1 November 2021, following the breakdown of diplomatic relations between Algeria and Morocco that August.

The flow in Medgaz pipeline to Spain can increase by around 2 bcm, after increasing its capacity.  These extra quantities can cover a part of the quantities that have been delivered via GME in 2021. However, Algeria has also recently suspended trade ties with Spain over the latter’s decision to side with Morocco over the disputed Western Sahara territory, which has exacerbated tensions between Rabat and Algiers.

The Transmed pipeline to Italy has around 10 bcm spare capacity, but recent analysis shows that Algeria will not be able to offer additional gas quantities since reaching its production capacity and needing to address its own growing domestic demand.

Exports in Libya ranged around 5 bcm before 2020 but declined to 3.2bcm in 2021. A recovery can offer the extra 1-2 bcm, but ongoing political instability in Libya can offer no such guarantees.

As a result, North Africa is not foreseen to provide any extra-large quantities of gas to Europe in 2022.

Azerbaijan: In 2021, the EU started receiving natural gas from Azerbaijan via the Trans Adriatic Pipeline (TAP). The capacity of TAP is around 11 bcm, and flows in 2021 totaled 8.1 bcm, meaning there is extra capacity of around 2.5 bcm.

Overall, the EU plan is based on making a year-on-year increase of 2-3 bcm from Azerbaijan, 2-3 from Algeria, and 4-5 bcm from Norway. These appear to be achievable with regards to the pipelines’ spare capacities, but ambitious in terms of gas production quantities for the suppliers.

This European demand for non-Russian gas will mainly be covered by the United States which is the only player that stands to gain economically. It is therefore in Washington’s interests that Europe converts a big part of its gas imports from Russian pipelines into LNG. It is also why the US has remained determined for years to stop the Russia-to-Germany NordStream 2 pipeline from becoming operational – which it succeeded in doing in February, as tensions over Ukraine worsened.

As the US has its own independent pricing system, it is not affected by the international gas prices, which are expected to rise significantly in the European and Asian markets, bringing instant value to LNG production activities in the US.

The EU plan to cut two-thirds of its Russian gas imports and replace it elsewhere – by the end of 2022 – is very optimistic. Closer scrutiny shows it will come with a very high cost – around five times the price that Europe used to pay. Whichever plan the EU implements, Europe will have to acknowledge that it will be neither an energy independent or politically independent continent for the foreseeable future.