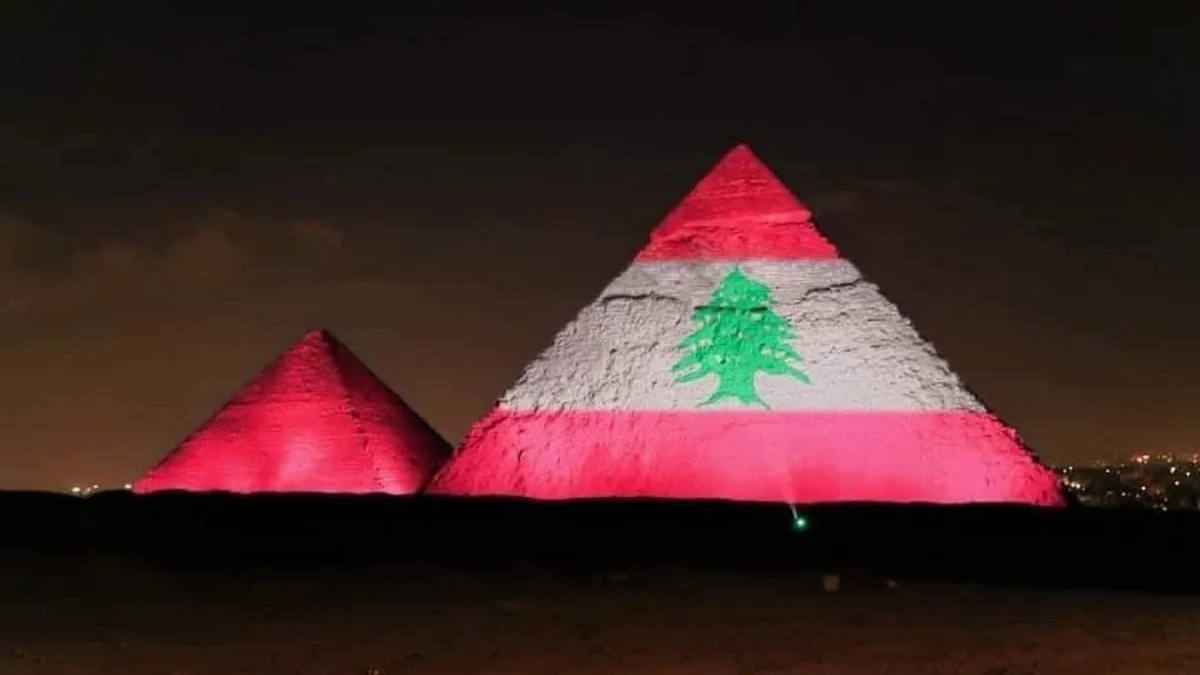 The pyramids of Egypt lit up with the Lebanese flag to mourn the victims of the Beirut port explosion in August 2020. (Photo credit: mahaassar/Twitter)

Lebanon is set to sign a ‘final’ gas deal with Egypt on 21 June to import gas from Egypt through Syria, according to a statement from the Lebanese Energy Ministry to Reuters on 17 June.

However, to this day, Washington has yet to issue a sanctions waiver to remove liability to US sanctions under the Caesar Act for the countries involved in the deal.

According to Reuters, a US official stated that after the final deal between Lebanon and Egypt is signed, Washington will “evaluate” if the deal is in compliance with sanctions on Syria and if a waiver can be issued.

The gas cannot flow without this waiver. If approved, however, the increased fuel supplies would allow state electricity providers to give 10 hours of electricity per day.

The deputy secretary general of Hezbollah, Sheikh Naim Qassem, stated that the US sabotaged its own plan by pushing the IMF to block the loan for this project, in addition to delaying the sanctions waiver.

According to the top Hezbollah official, the IMF refusal to finance the project was tied directly to the US administration.

The governments of Iran, Russia and China would also accept payments for infrastructure projects in Lebanese lira instead of  foreign currencies, given the dwindling foreign currency reserves of the Lebanese Central Bank.

During a recent visit to Lebanon, the EU Special Representative for the Peace Process in West Asia, Sven Koopmans, reportedly made an offer to Lebanese officials to normalize relations with Israel in exchange for much-needed aid in food, medicine, and energy.

This offer, described as tantamount to blackmail, reportedly promoted normalization as a ‘final solution’ for Lebanon. It was made in order to receive western help to overcome the severe economic meltdown that has ravaged Lebanon since 2019.

“You are not able to solve your crises and have not participated in peace negotiations before. We are now offering the doors open to the peace process, which will reflect prosperity on you,” the EU envoy told Lebanese officials, according to sources cited by Al-Akhbar.

Lebanon’s multiple crises have seen over 80 percent of the population plunge below the poverty line, a currency loss of over 95 percent of its value, and fuel shortages that leave most of the country with no access to electricity.