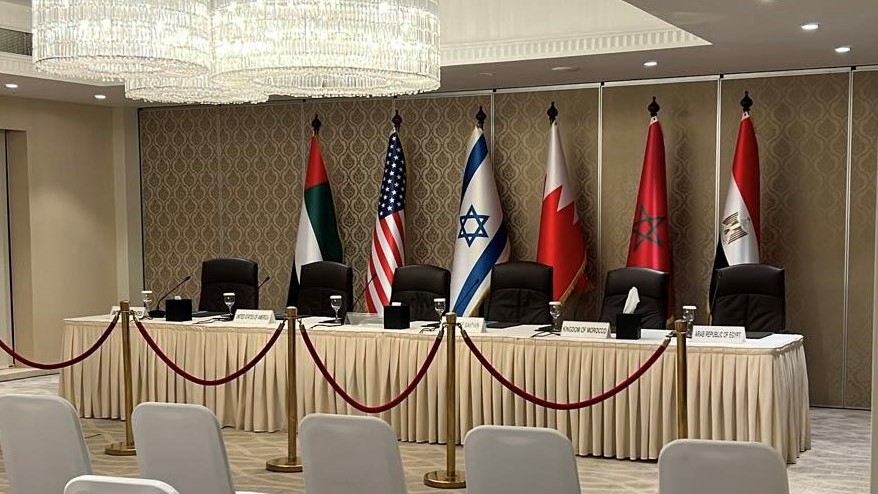 Flags of the UAE, US, Israel, Bahrain, Morocco, and Egypt at the follow-up to the Negev Summit in Manama, Bahrain on 27 June 2022. (Photo credit: @AlonUshpiz / Twitter)

Officials and delegates from the US, Israel, Bahrain, the UAE, Morocco, and Egypt met in the Bahraini capital of Manama on 27 June for a continuation of multilateral discussions that started in the controversial Negev Summit hosted in Israel on 27 March.

PDAS Lempert will be in Manama on 6/27 to participate in the first meeting of the Negev Forum Steering Committee, building on the Negev Summit in March where Sec Blinken and FMs of Bahrain, Egypt, Israel, Morocco & UAE worked together to advance a common vision for the region.

Commitments negotiated and drafted during the Negev Summit are slated to be formalized during the meeting in Manama.

The US delegation is led by Yael Lempert, US Deputy Assistant Secretary of State for Near Eastern Affairs, while Israel is being represented by Foreign Ministry director general Alon Ushpiz and deputy director general Oded Joseph.

“These will become permanent frameworks for co-operation between us and countries in the region,” Joseph stated.

The Negev Summit nations agreed to serve as a working group which meets two or three times per year, according to Joseph.

Of the many subjects to be discussed, the main issues are centered around countering Iran as well as the Palestinian issue.

Additionally, this meeting is considered an important precursor to the upcoming visit by US President Joe Biden to West Asia.

“The presence of the American delegation will be very important, as well as the arrival of President Biden to this region and, specifically, his visit to Israel, from our view, will be an important part of what has been taking shape in the region for the past year and a half,” Joseph added.

Speculation around the visit by Biden says it will advance a potential formal military alliance between Israel and its Arab allies, in addition to furthering formal normalization of diplomatic ties between Saudi Arabia and Israel.

Jordanian King Abdullah stated that he would warmly support a NATO-style military alliance for West Asian nations during an interview with CNBC on 24 June.

“I would be one of the first people [to] endorse a Middle East Nato,” King Abdullah stated in the interview.

Hezbollah Deputy Secretary General Sheikh Naim Qassem stated in response: “It is ridiculous for the United States to declare a ‘Middle East NATO’ that includes the Arab states whose executive control is in the hands of the Israeli regime. This alliance will disgrace them.”

According to an Israeli Channel 12 News report from 9 June, Israel has deployed radar systems in multiple countries throughout West Asia, including the UAE and Bahrain, as part of its buildup of hostilities against Iran.

Israel held direct bilateral talks with Bahrain on 1 June, the second formal discussion between the two since the 2020 Abraham Accord agreement between them.

“Relations with Bahrain are at the core of Israel’s diplomatic activity. The roadmap for developing relations between the countries is built step by step in practical terms that bear fruit for the benefit of both peoples,” said Alon Ushpiz, who led the delegation to Manama.