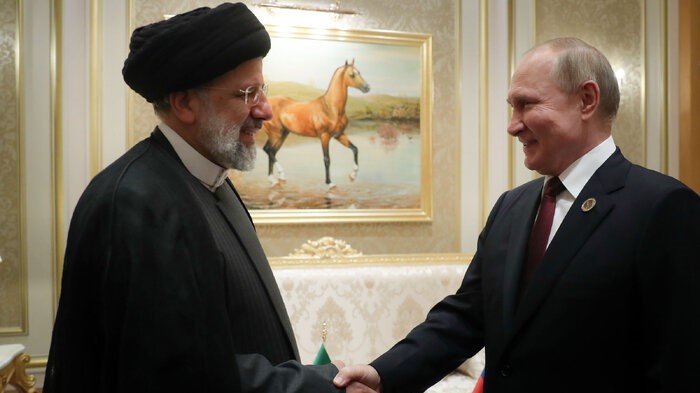 Russian President Vladimir Putin met with Iranian President Sayyed Ebrahim Raisi on 29 June, at the summit of the Heads of States of the Caspian Sea littoral countries in Ashgabat, Turkmenistan.

This was Putin’s first foreign trip since the start of the military operation in Ukraine on 24 February.

#Iran president Raisi and #Russia president Putin on the sideline of the Caspian Sea summit in Turkmenistan. They are talking on the way to the conference hall. pic.twitter.com/byU0V3NPCE

Energy policy and bilateral trade were high on the agenda during discussions between the two heads of state.

“Relations between the two countries in the industries of trade and energy cooperation are at a high level … but these relations still have great potential for expansion,” said President Raisi.

President Putin highlighted that bilateral trade has increased in recent months, and emphasized the need for this trend to continue.

The two sides also discussed the progress of their alternative financial and banking system, through which they seek independence from western institutions like SWIFT, and to free their countries from the pressures of economic sanctions.

Russia is currently working on linking its Mir debit/credit card payment system to the Iranian market, while also allowing Iranian cards to work reciprocally in Russia.

Moscow has been rapidly working towards independence from western financial and payment institutions after it surpassed Iran as the country with the most sanctions imposed on it, following the war in Ukraine.

The Russian head of state also addressed the importance of strategic bilateral ties between Moscow and Tehran.

“Our relations are truly deep, strategic in nature. We remain in constant contact on issues of political cooperation, on issue of security, we work on flashpoints, like in Syria,” Putin stated.

President Raisi previously referred to his 19 January visit to Moscow as a “turning point” in bilateral relations.

Recently, Russian Foreign Minister Sergei Lavrov visited Tehran to discuss the development of the terms of a forthcoming formal long-term cooperation agreement to be signed by the two countries in the near future.

At the conclusion of the meeting between the two presidents, Putin requested Raisi to “relay best wishes to the spiritual leader of Iran Mr [Ali] Khamenei.”

During the meeting between the heads of state of the Caspian Sea littoral countries, President Raisi declared that the presence of foreign troops in the region does not lead to peace or security.

In a meeting with Azerbaijani President Ilham Aliyev, the Iranian head of state specifically warned about Israeli presence in the region.

“The presence of the Zionist regime in any environment undermines security there,” Raisi said.

On 27 June, Iran submitted an application to become a member of the BRICS economic bloc, which includes Brazil, Russia, India, China, and South Africa.

After the start of the war in Ukraine, Russia called on the members of BRICS to integrate their payment systems and use their respective national currencies for intra-organizational trade, in a bid to counter severe western sanctions.