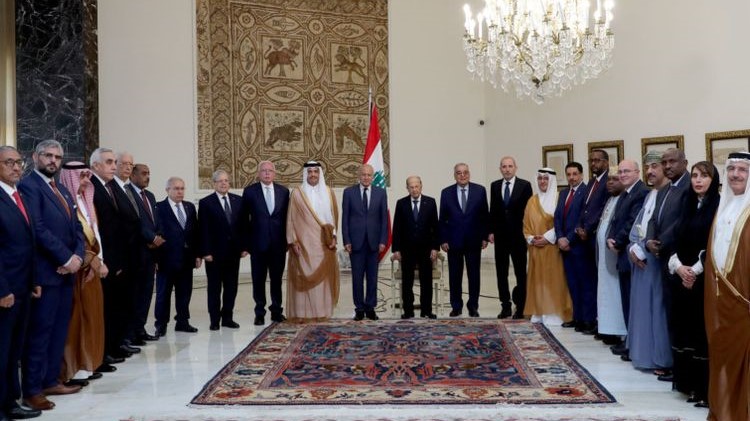 Delegates from the Arab League with Lebanese President Michel Aoun at the presidential palace in Baabda, Lebanon on 2 July 2022. (Photo credit: REUTERS)

Ministers from the member states of the Arab League met in Beirut, Lebanon for consultative meetings on 2 July where they discussed a number of issues, including potentially unfreezing Syria’s membership to the organization.

Syria was not represented at this meeting, according to Arab League officials.

“All Arab countries will participate in the consultative meeting of the Arab foreign ministers on Saturday, except Syria whose membership is frozen,” Arab League Secretary General Ahmed Aboul Gheit stated upon his arrival to Beirut.

“The return of Syria [to the Arab League] will be very close,” said Mahmoud Khalifa, the military adviser to Aboul Gheit.

Ramtane Lamamra, the foreign minister of Algeria, noted that Syria is a founding member of the Arab League.

Algeria is testing the waters at this meeting for a consensus on Syria in hopes of gaining a result by the next Arab League summit in the Algerian capital this November, the first summit in three years.

“The significance of the meeting in Beirut is that the Arab countries stand by Lebanon, its political leadership and its people, with the hope that this beautiful country and its long history will overcome the economic and political problems it suffers from,” declared Aboul Gheit.

President Aoun also briefed the ministers on the current state of Lebanon.

“Lebanon, which is facing a series of accumulated crises, is also suffering from burdens resulting from large numbers of refugees on its land,” Aoun said.

“[Lebanon] is no longer capable of this reality. The international community’s stance does not encourage finding quick solutions. We hope you will help in confronting these challenges.”

An investigation into the activities of Riad Salameh by The Cradle columnist Léa Azzi identified the financial policies employed by Lebanese Central Bank Governor Riad Salameh, which were carried out at the behest of the US in order to implement its “maximum pressure” policy.

The US brokered a plan to import energy to Lebanon from Egypt and Jordan via Syria just after Hezbollah sought to import Iranian fuel to avert the man-made fuel shortage plaguing the country.

However, the US has reportedly pressured the IMF to deny Lebanon the funding needed for their own proposal and has not yet issued a sanctions waiver for the energy resources to pass through Syria.

The Arab League meeting also addressed the looming food crisis threatening West Asia as a result of the Russia-Ukraine conflict and the efforts to calm tensions between Israel and Palestine in order to bring about a “two-state solution.”