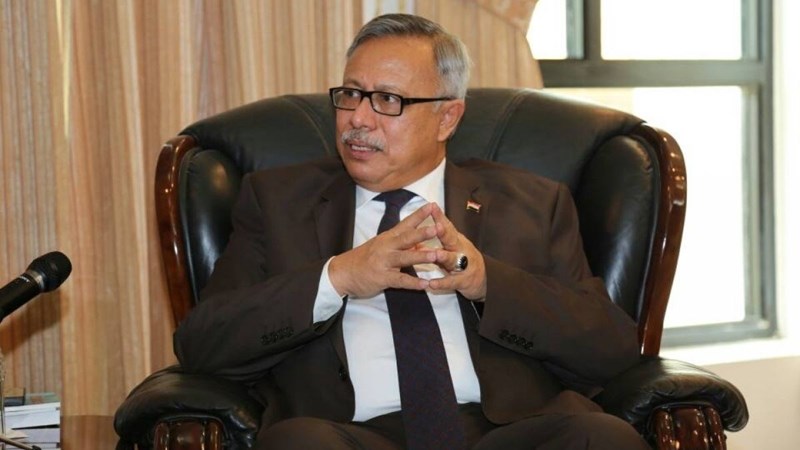 The Prime Minister of the Sanaa government in Yemen, Abdulaziz Saleh bin Habtoor, referred to the US ambassador’s visit to Hadhramaut and Al-Mahra earlier this week as part of a US scheme to control the country’s oil.

The ambassador’s visit “falls under his country’s continuous quest to control the oil fields and ports along the southern strip of the Republic of Yemen, and part of the western coast,” the Prime Minister said.

During a meeting between Bin Habtoor and the governors of Hadhramaut and Al-Mahra, Luqman Baras and Qatabi Ali Al-Faraj, the Yemeni Prime Minister emphasized that the US project in Yemen aims to establish control over the country’s natural wealth, and exploit its geopolitical position for its own benefit.

“This comes at the expense of the Yemeni people, impoverishing them, aggravating their humanitarian situation, and fueling the spirit of conflict between them,” he said.

During the meeting, Bin Habtoor and the two governors stressed the importance of armed resistance, particularly in Hadhramaut and Al-Mahra, as the best way to confront the Saudi-led coalition and its US sponsor, who they referred to as the “new colonizer.”

On top of the Saudi-led blockade on Yemen, which for several years has devastated the country’s economy and prevented the entry of essential aid including humanitarian fuel shipments cleared and inspected by the UN, the US-backed coalition has also been openly dispatching tankers to Yemen’s ports in order to loot large quantities of crude oil worth millions of dollars.

Bin Habtoor said the coalition’s recent looting operations were done under US directives, and called them part of Washington’s plan to secure control over Yemeni oil through its Gulf allies.

The US is notorious for its theft of oil in countries it illegally occupies, namely Syria, where occupying US forces loot oil with the help of the Syrian Democratic Forces (SDF).

US troops and SDF forces in northern Syria are in control of most of the oil fields in Hasakah and Deir Ezzor governorates and have been regularly smuggling Syrian oil out of the country to sell abroad.