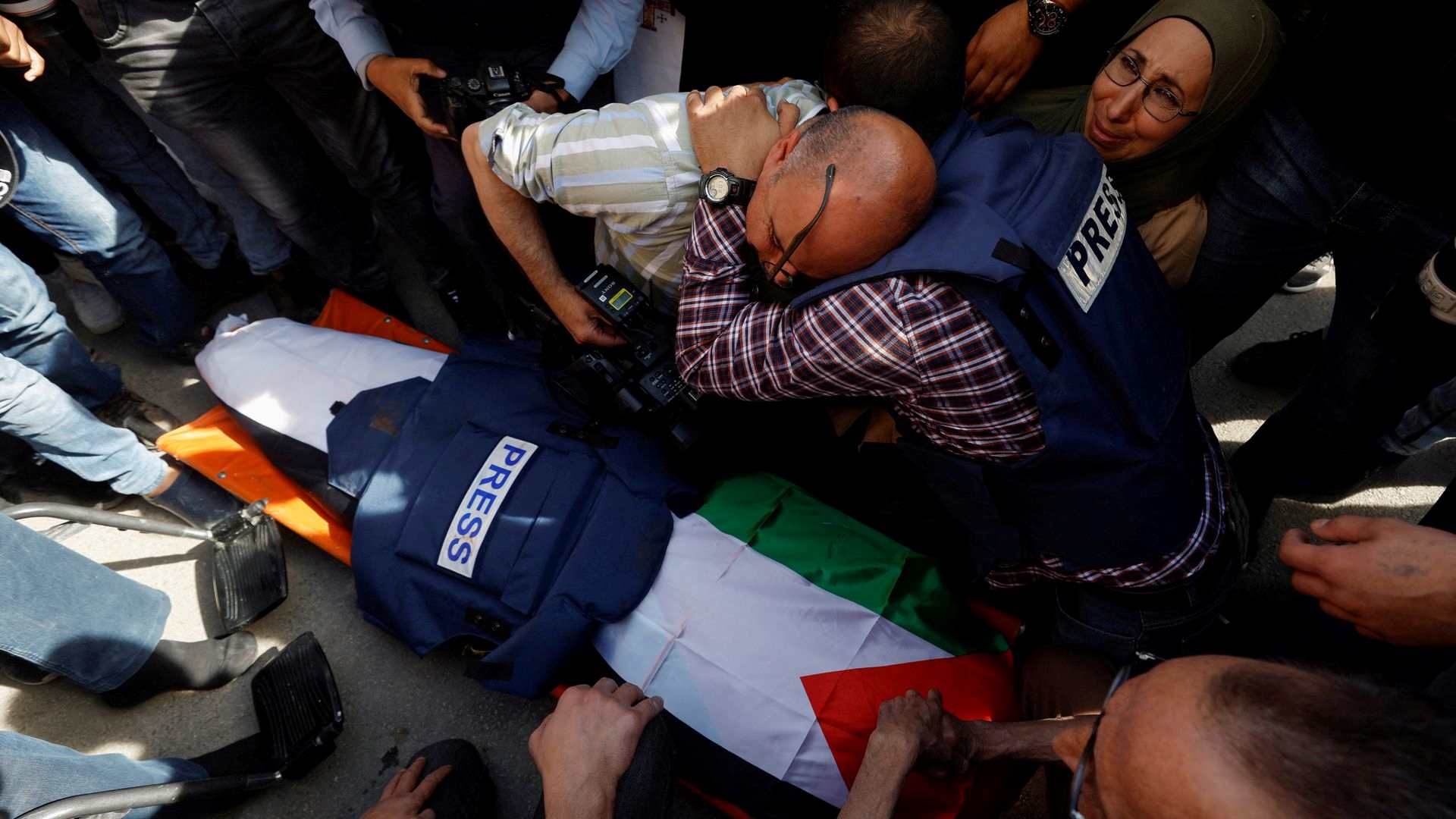 Journalists mourn over the body of Al Jazeera reporter Shireen Abu Aqla, who was killed by Israeli gunfire during a raid on Jenin in the occupied West Bank. 11 May, 2022. (Photo credit: Reuters)

Hebrew media has reported the results of the US forensic investigation into the bullet that killed journalist Shireen Abu Aqla, which included Israeli oversight during the process.

The US investigators claimed ‘no definitive conclusion’ on the origin of the bullet, suggesting that gunfire from Israeli positions was likely responsible.

However, the investigators added that there is “no reason to believe that this was intentional but rather the result of tragic circumstances.”

The bullet that killed journalist Shireen Abu Aqla was handed back to the Palestinian Authority (PA) on the night of 3 July, after being examined by the US in the presence of Israeli officials, according to a report from Al Jazeera.

PA Justice Minister Mohammed al-Shalaldeh confirmed to Al Jazeera that the bullet has been returned to them by the US.

The results of the forensic analysis are expected to be announced some time on 4 July.

A day earlier, Israeli authorities announced they would personally examine the bullet, despite demands by Palestinians to keep the crucial evidence out of occupation officials’ hands.

The PA had only agreed to hand over the bullet to the US for examination.

The general prosecutor for the Palestinian Authority, Akram al-Khatib said: “We agreed to transfer the bullet to the Americans for examination.”

Al Jazeera indicates that a potential compromise was reached, whereby the US conducted the examination with the presence of Israelis.

Several Palestinian officials, alongside witnesses, media outlets and rights groups, maintain that the notable journalist was killed by Israeli occupation forces in a sequence of events confirmed by the UN.

According to forensic and ballistic experts, the bullet was designed to pierce through armor, typically used in M4 rifles. The fatal shot penetrated through her helmet.

Former deputy national intelligence officer for transnational threats at the CIA, Glenn Carle, remarked that the results of this ongoing investigation could put US President Joe Biden’s administration in an awkward position.

Carle added: “For a forensic analysis of a bullet in a shooting, it’s straightforward that the FBI would take the lead on this. However, because it is an international issue involving involving an entity and a state, and the international relations of the US, anything decided to be worked on, will be coordinated with other relevant parts of the government. The decision will frankly come from the White House.”

Last month, Al Jazeera confirmed the veracity of a video which showed the moments leading up to the murder of Palestinian-American journalist Shireen Abu Aqla by Israeli occupation troops.

The video corroborated eyewitness accounts, which said there were no clashes in the area as the team of journalists prepared to cover Israeli raids in the West Bank city of Jenin.