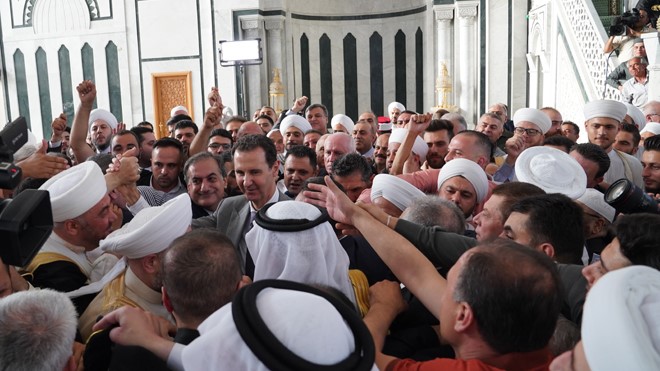 Syrian President Bashar al-Assad visits the central mosque in Aleppo for Eid al-Adha prayers on 9 July 2022, during his first visit to the city since its liberation by Syrian forces in late 2016. (Photo credit: SANA)

On 8 July, Syrian President Bashar al-Assad visited the city of Aleppo for the first time since the onset of the western-backed war in 2011.

President Assad toured the Aleppo thermal power plant, which is currently being repaired and tested with the help of Iranian turbine engineering and manufacturing company, Mapna.

On the morning of 9 July, the Syrian president joined the congregational Islamic prayer for Eid al-Adha at the Sahabiy Abdallah bin Abbas Mosque in Aleppo.

The visit of the Syrian president coincides with the reinforcement of the Syrian–Turkish border with heavy weapons and troops from the Syrian Arab Army (SAA), in anticipation of a planned Turkish military invasion.

The border reinforcement is being done in coordination with the US-backed Syrian Democratic Forces (SDF), a Kurdish militant group that is at odds with Turkey.

These latest developments are considered a show of strength from Damascus, as the government seeks to re-assert its national sovereignty.

The liberation of Aleppo in 2016 was the turning point in the foreign-backed war against Syria.

In 2012, various Al-Qaeda linked rebels, including the Free Syrian Army (FSA) and Jabhat al-Nusra, now known as Hayat Tahrir al-Sham (HTS), captured the eastern part of the city and occupied it for several years.

Fighting between government forces and Al-Qaeda-linked militants continued until late 2016, when the SAA and its allies made the final push, leading to the SAA declaring complete control of the city on 22 December 2016.

Various human rights NGOs alleged that the SAA and allies committed war crimes during the liberation of the city.

However, the ‘impartiality’ of these groups was questioned due to their covert association with armed militant groups that were occupying eastern Aleppo.

The White Helmets, in particular, has been caught on several occasions collaborating with Al-Qaeda and other armed groups in Syria.

Damascus began to stabilize its control over lost territories in the years since those revelations.

A new threat, however, has recently emerged from Ankara, with Turkey planning a military invasion into northern Syria under the pretext of establishing a buffer zone between the Turkish border and military positions held by the Kurdistan Workers Party (PKK).

The joint defense agreement between the SDF and SAA is part of a Russia-mediated plan to defend the country against Turkey’s planned invasion.

SAA military units in Raqqa and Aleppo were reinforced by Syrian military convoys arriving under the protection of Russian fighter jets.

On 28 June, Turkish occupation forces and allied armed groups launched rocket and artillery shells on residential areas in Aleppo, Syria, threatening the city that has been slowly been returning to life since 2016.

In an exclusive interview with Russia’s Sputnik news agency on 27 June, Syrian Foreign Minister Faisal Mikdad said that Turkey is attempting to create a demographic change in these areas, to make way for the construction of illegal settlements.

“Turkish practices in Syria,” Mikdad continued to say, “are a blatant example of disregard for minimum civilized and moral values, international law, and the Charter of the United Nations.”