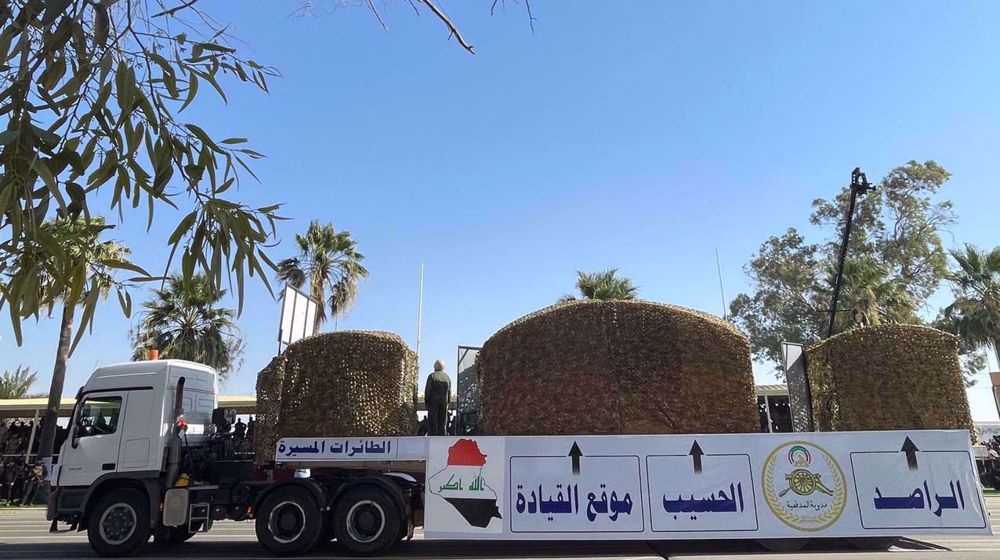 New drone systems, Al-Rased (monitor) and Al-Haseeb (auditor), belonging to the Iraqi Popular Mobilization Units (PMU) were unveiled on 23 July 2022, the 8th anniversary of the founding of the PMU. (Photo credit: Twitter)

The semi-official Iraqi anti-terror militia known as the Popular Mobilization Units (PMU) celebrated the 8th anniversary of their founding on 23 July by unveiling new combat weaponry.

The eighth anniversary of the group took place in Al-Khalis, in the Diyala province of eastern Iraq.

The PMU unveiled two new unmanned aerial aircraft systems, named Al-Rased (monitor) and Al-Haseeb (auditor), which will enable Iraqi anti-terror militia to fly drones either remotely through a pilot or through advanced technology on the drone’s onboard computer that would allow it to autonomously fly itself.

The PMU was formed in 2014 after the Iraqi cleric Ayatollah Sayyed Ali Sistani called on all Iraqis to volunteer alongside the Iraqi army against ISIS militants who had nearly taken over the entire country and were projected to take Baghdad if left unhindered.

While the leadership of the PMU mostly comprises Shia Muslims, many people within different ranks are Sunni Muslim, Christian, or Kurdish.

Due to PMU efforts, Iraq was able to defeat ISIS in December 2017.

The PMU received government recognition as a semi-official military outfit with similar legal rights as the national army.

ISIS originated from among elements of Al-Qaeda linked militant groups in both Syria and Iraq.

The US has financed and armed the rebel insurgency in Syria since 2011, under the pretext of ousting Syrian President Bashar al-Assad from power.

The CIA had covertly supported the Free Syrian Army (FSA), which was allied with the Syrian branch of Al-Qaeda, known as Al-Nusra Front.

The documents also show that the US accepted these militant groups and hoped for a ‘Salafist principality’ to emerge in eastern Syria.

Salafism is an ideology similar to Wahhabism, which believes in shedding the blood of those who do not agree with their version of Islam.

Various militant groups, such as ISIS and Al-Qaeda, ascribe to the same ideology.

Amid calls for the PMU to disband, the chief of the militia group announced that they will not disarm nor cease operations until the complete withdrawal of US forces from Iraqi soil.

The call for the US to fully withdraw from Iraq came after the US assassinated PMU leader Abu Mahdi al-Muhandis along with Iranian Quds Force General Qassem Soleimani on 3 January 2020.

In response, the Iraqi government passed a law that declares the US must set a timeframe for full withdrawal.

Despite the immense popularity the PMU has among the Iraqi people of various sects, hundreds of thousands of worshippers loyal to controversial Shia cleric Muqtada al-Sadr flooded the streets of Baghdad for Friday prayers on 15 July, in a show of political might, nine months into a parliamentary deadlock.

The massive turnout was despite the absence of Al-Sadr and the scorching summer heat.

Sheikh Mahmoud al-Jiyashi led the prayers, reading out a speech from Al-Sadr in which he called for the dissolution of armed groups that have deep ties with Iran, referring to the Popular Mobilization Units (PMU), also known as the Hashd al-Shaabi.

According to the speech by Al-Sadr, the PMU “must be re-organized, and undisciplined elements must be removed,” lamenting “foreign interventions” without naming specific countries.