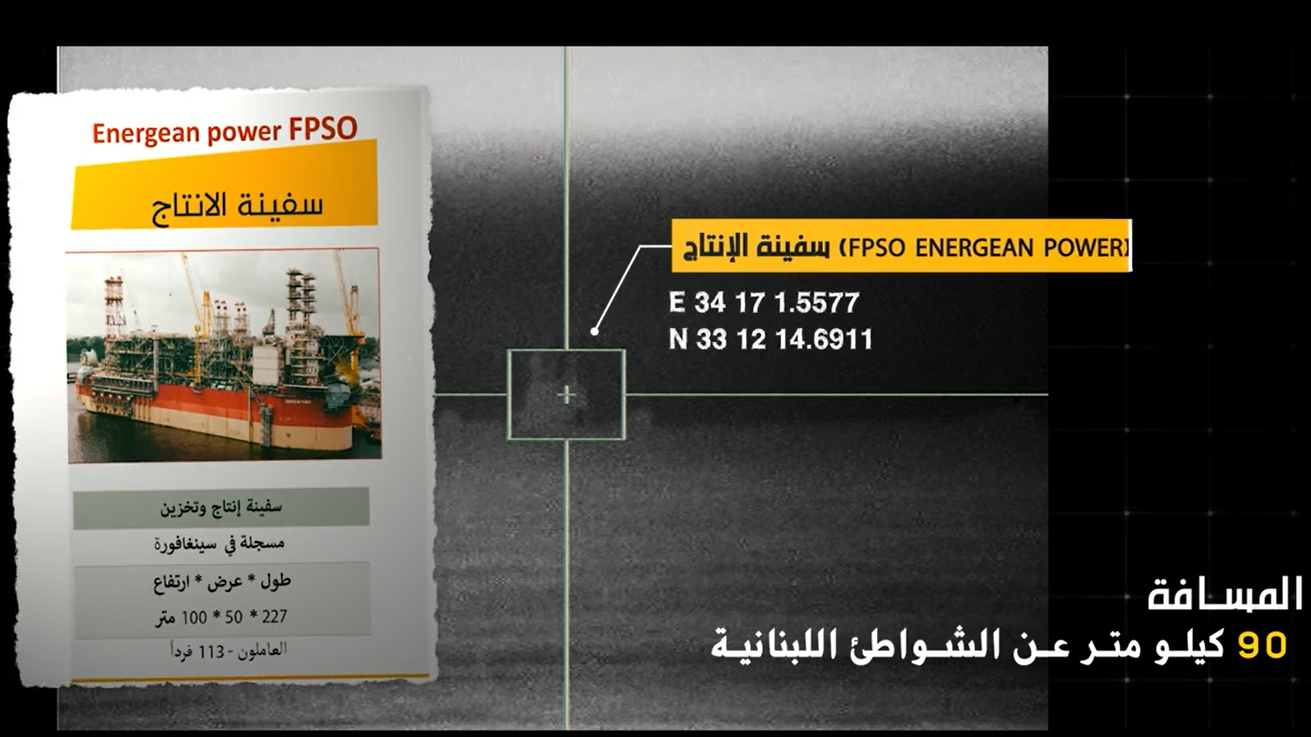 The footage included exact coordinates of each extraction rig and their distance from Lebanese shores.

The title of the video, in both Arabic and Hebrew, read “[You are] in our crosshair … stalling is not beneficial.” The footage was taken from the ground and not by drone aircraft.

Anti-ship missiles were displayed in the video, demonstrating the capacity of the Lebanese Islamic resistance.

The video was released on the same day as the visit of the Israeli-born US negotiator Amos Hochstein to Lebanon.

Hochstein is in charge of the ongoing indirect, US-mediated negotiations between Lebanon and Israel over the maritime border lines and is set to meet with Lebanese officials.

His impartiality has been questioned due to both his service in the Israeli armed forces during the occupation of Lebanon and his connections to the energy industry that seeks to profit from the natural resources in the Mediterranean.

Tel Aviv is pressuring the US to finalize an agreement over their maritime border with Lebanon before the September deadline set by Lebanese resistance movement Hezbollah.

“Nasrallah’s threats must be taken seriously, and the Israeli forces must prepare,” said Israeli Reserve Major General Amos Gilad to KAN news. “If they attack the Karish rig or any other rig, that will definitely lead to a confrontation that can have many dimensions.”

Hezbollah has declared it will not allow Israel to extract any valuable resources from Lebanese waters.

“The Lebanese state is incapable of making the right decision to protect Lebanon and its riches. The resistance must therefore make this decision,” Sayyed Hassan Nasrallah said.

“All fields are under threat, not only Karish, and no Israeli target at sea or on land is out of reach of precision missiles belonging to the resistance,” he added.

Regarding a possible confrontation with Israel over these resources, Nasrallah said that “the matter depends on how the enemy, the US and the Europeans will act.”

He highlighted the need for Lebanon to commit to “the borders stipulated by the Lebanese state and to end the veto on the companies extracting oil.”

“US President Biden came to the region for gas and oil, and the [additional resources] that Saudi Arabia and the UAE can offer will not solve the issue of Europe’s needs,” Nasrallah said.

According to Nasrallah, the US and Europe both need oil and gas, and Israel sees that as an opportunity.

But “Biden does not want war in the region, and this is the time to pressure [the US] for our oil,” Nasrallah said.

The Hezbollah chief believes that if the extraction of oil and gas starts in September before Lebanon retrieves its rights, a confrontation is certain to happen.

“We have set a goal that we will seek to achieve no matter what, and we will resort to anything to this end,” the Hezbollah chief warned.