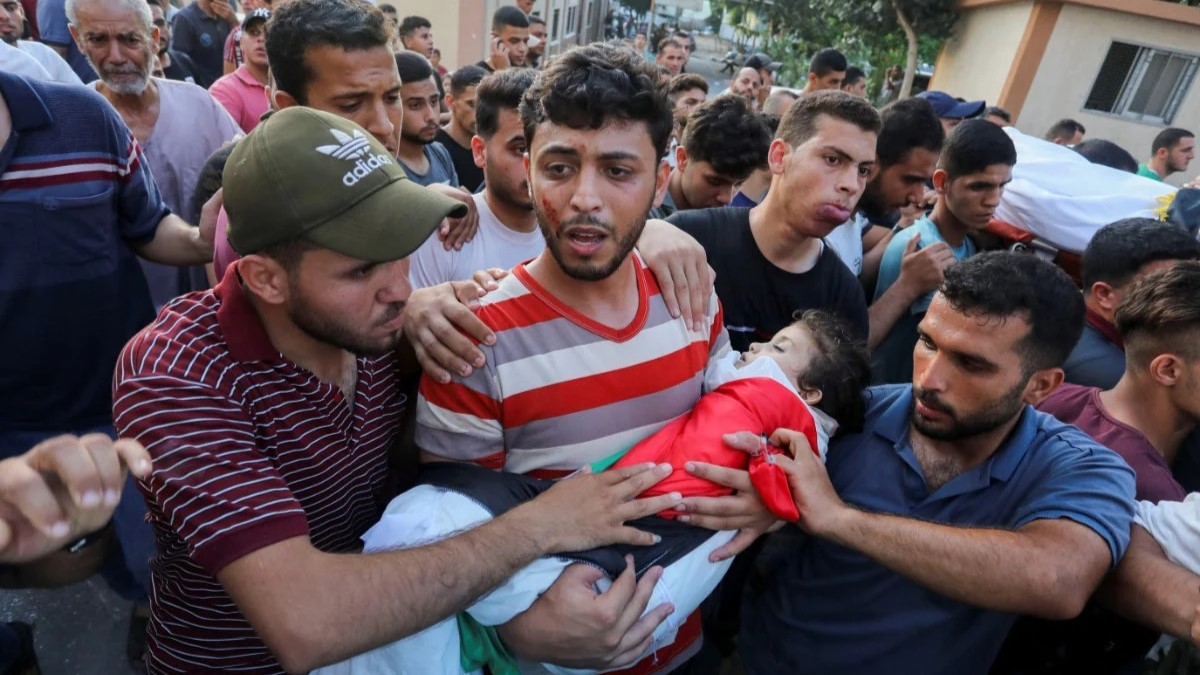 The father of five-year-old Palestinian Alaa Qaddoum carries her body during her funeral in Gaza City on 5 August, 2022. (Photo credit: REUTERS/Ashraf Amra)

Many nations have issued condemnations of Israel’s brutal airstrikes on the besieged Gaza Strip, which started on 5 August.

So far, Tel Aviv’s bombing campaign has left over 100 injured and caused the deaths of 13 Palestinians, including a five-year-old girl and three commanders of the Palestinian Islamic Jihad (PIJ).

Russian Foreign Ministry spokeswoman, Maria Zakharova, condemned on 6 August the escalation that “was provoked by Israeli air strikes,” adding that Moscow is deeply concerned over the breakout of large-scale conflict.

The official also called all sides to “exercise maximum restraint.”

Egypt has also condemned the attacks and warned against escalation, with an anonymous Egyptian security source telling Arab media: “We hope to reach a consensus to return to calm as soon as possible.”

Another Egyptian source revealed that a PIJ delegation may travel to Cairo on 6 August for talks with Egyptian officials.

In another strong condemnation of the Israeli aggression, Qatar called on the international community to “move urgently” to stop Israel’s continuous violence against civilians.

The Gulf state’s foreign ministry affirmed via statement the kingdom’s “firm position on the justice of the Palestinian cause, the legitimate rights of the brotherly Palestinian people, and the establishment of their independent state on the 1967 borders, with East Jerusalem as its capital.”

Jordan also called on Israel to “immediately stop its aggression,” warning of the dangerous consequences of increased escalation.

The Islamic Emirate of Afghanistan vehemently denounced Tel Aviv’s actions on Saturday, with the Taliban foreign ministry calling on the international community to perform its duty and prevent Israeli crimes against Palestinians.

On the same day, the Islamic Republic of Iran issued its own condemnation of the attacks on Gaza.

“In its crime last night, the Zionist regime once again showed its occupier and aggressor nature to the world, but the resistance of the people of Gaza will speed up the decline of this child-killing regime,” Iranian President Ebrahim Raisi said on the morning of 6 August.

A statement by the Turkish Foreign Ministry on 5 August “strongly” condemned the Israeli bombardment, referring to the loss of civilian life as “unacceptable,” and urging “restraint and common sense.”

Turkey has recently strengthened its diplomatic relationship with Israel after a long period of tension, and has reportedly been deporting members of the Hamas resistance faction at Tel Aviv’s request in a bid to further improve relations with Israel.