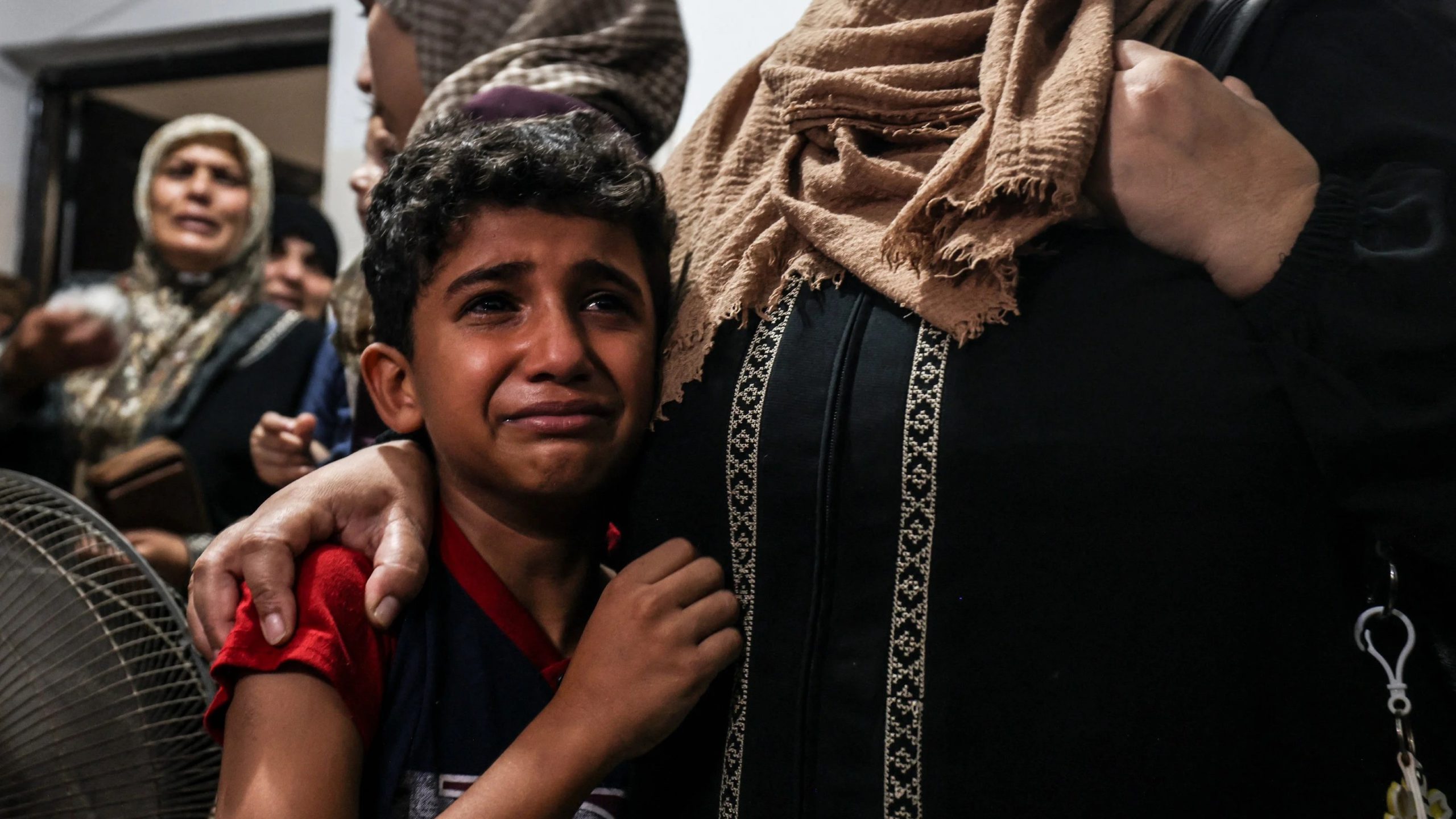 Relatives of a young Palestinian killed during the night in the Jabalia refugee camp, in the northern Gaza Strip, react during his funeral in the same camp, on 7 August, 2022. (Photo credit: AFP)

An Egypt-mediated ceasefire agreement held through the night in the besieged Gaza Strip, despite a flurry of Israeli airstrikes and retaliatory attacks from the Palestinian resistance up until the last minute.

The agreement was reached late on 7 August between Israeli officials and leaders of the Palestinian Islamic Jihad (PIJ) resistance group, and was brokered by an Egyptian delegation.

PIJ officials said, however, that the movement “reserves the right to respond to any Zionist aggression.”

“The occupiers failed to impose any of their conditions on us,” PIJ Secretary General Ziad al-Nakhala said on Sunday night from Tehran, adding that resistance conditioned the truce on the release of two of its prisoners.

The prisoners were identified as Bassam al-Saadi, a senior official from the PIJ political wing who was arrested last week in the occupied West Bank, and Khalil Awawdeh, a PIJ member who has been on hunger strike.

On Monday morning, Israel’s Internal Security Minister Omer Barlev shot down any possibility of their release, saying “Israel did not agree to anything, we responded negatively to the demands.”

Al-Saadi’s arrest was one of the main triggers of the Israeli aggression, as Tel Aviv launched what they called “pre-emptive” raids on Gaza “to prevent any retaliatory attacks.”

Since 5 August, Israel has been bombing what many consider to be the world’s largest open-air prison, flattening residential buildings and striking refugee camps in an alleged campaign against PIJ leaders.

Palestinian officials say 44 people died in these attacks, including 15 children. The PIJ acknowledged 12 of its members were killed, while Hamas says two of their own died.

This leaves the civilian death toll at 30, with another 350 injured by the blasts.

In response to the unprovoked attacks, the PIJ launched hundreds of rockets into the occupied territories, forcing settlers to spend the weekend inside bomb shelters.

According to PIJ leader Al-Nakhala: “fifty-eight Zionist populated settlements were simultaneously [hit by the] Al-Quds Brigades’ rockets.” He added that “the Palestinian nation, especially the Al-Quds Brigades, managed to obtain a great achievement in the face of the Zionist enemy.”

Israeli emergency services say three settlers were wounded by shrapnel, 31 were lightly hurt, and many more had to be “treated for anxiety.”

Early on 8 August, Tel Aviv announced it was lifting a unilateral closure of all crossings in and out of Gaza that has been in place since 2 August.

According to an army statement, the crossings will reopen for humanitarian aid “subject to a security assessment.”

The statement goes on to say that “if the situation remains calm, an assessment will be held on the potential full reopening of the crossings.”

The Israeli closure of Gaza’s roads forced the complete shutdown of the enclave’s last functioning power plant, as occupation troops severely restricted the entrance of fuel, goods, aid, and people.

But despite the fragile truce, Palestinians say it is impossible for them to live any sort of normal life after 15 years of a crushing economic and military blockade by Tel Aviv.

“People in Gaza don’t get to go back to anything like normal because they are still living under Israel’s siege that is a form of silent violence against every man, woman and child in Gaza, 24 hours a day, 365 days a year, for 15 years,” Ali Abunimah, the director of The Electronic Intifada, told Al Jazeera.

“This is going to happen again … it’s going to keep happening because Israel enjoys total impunity for its crimes against the Palestinian people, and not just impunity, but full and active support. Remember it was bombing Gaza with weapons provided by the US, EU and Canada, who all stood by Israel,” he added.

Over two million Palestinians live in the narrow coastal strip, as Israel and Egypt severely restrict the movement of people and goods, citing “security concerns.”