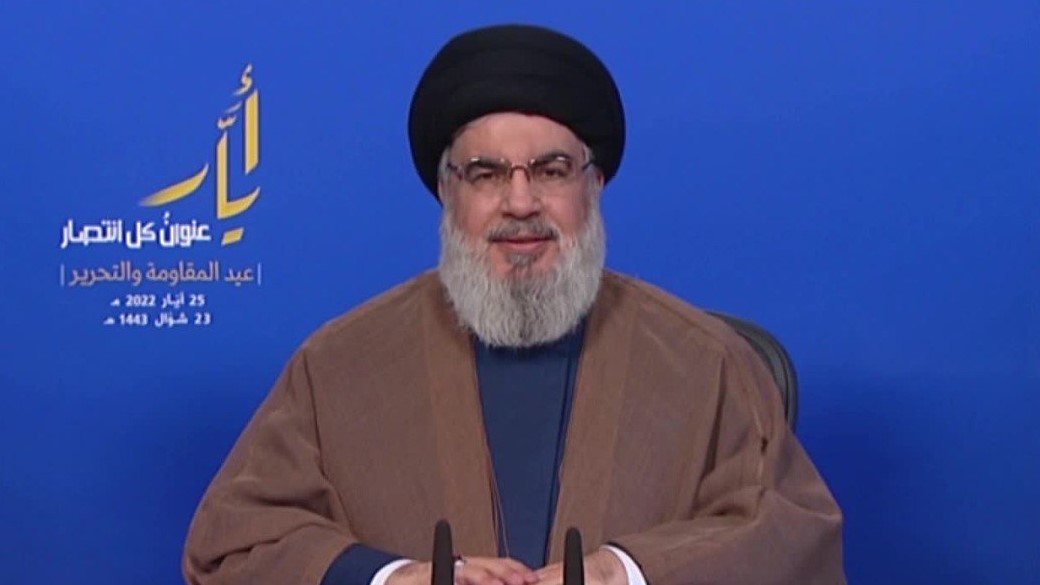 Sayyed Hassan Nasrallah speaking on the 22nd anniversary of the liberation of Lebanon from Israeli occupation on 25 May 2022. (Photo credit: Al Manar TV)

The Secretary General of Hezbollah, Hassan Nasrallah, reaffirmed the resistance group’s undeterred stance on the maritime issue with Israel during a speech on 22 August celebrating Hezbollah’s 40th anniversary.

“We are standing up in defense of our resources of oil and gas. We will make sure to fulfill our duties fully as we always have. No amount of pressure or threatening will scare us away from fulfilling our responsibilities,” Nasrallah said.

The conflict arose over energy exploration rights in a disputed area of the Mediterranean sea.

Israel has expanded its efforts for the extraction of fossil fuels as western demand is growing over a looming energy shortage driven by sanctions aimed at the Russia’s energy sector.

The row over the Karish gas field escalated in June, after Israel deployed a production vessel into the disputed territory.

Hezbollah’s leader responded by saying: “the hand that reaches for any of this wealth will be severed.”

Israeli Prime Minister Yair Lapid last month visited the Karish gas field and was briefed by the Israeli army on tactics to repel any attacks in the area.

Various Israeli media outlets recently reported that a deal between Israel and Lebanon was close, and that Israel was willing to make concessions to reach such an agreement.

However, Nasrallah has maintained that the outcome of the dispute is entirely dependent on how “the enemy, the US, and the Europeans will act.”

Negotiations between Israel and Lebanon are mediated by the US state department under the oversight of US senior advisor for energy security Amos Hochstein.

In addition, Israeli law would also require a national referendum on any agreement reached with Lebanon.

The leader of the resistance group addressed his supporters on Monday in a televised speech to commemorate Hezbollah’s founding, as well as the 2006 victory against the Israeli army and the second liberation in 2017.

Nasrallah addressed the future vision and goals of the resistance, which aims to liberate the remaining occupied lands of Lebanon, and praised past efforts by the group.