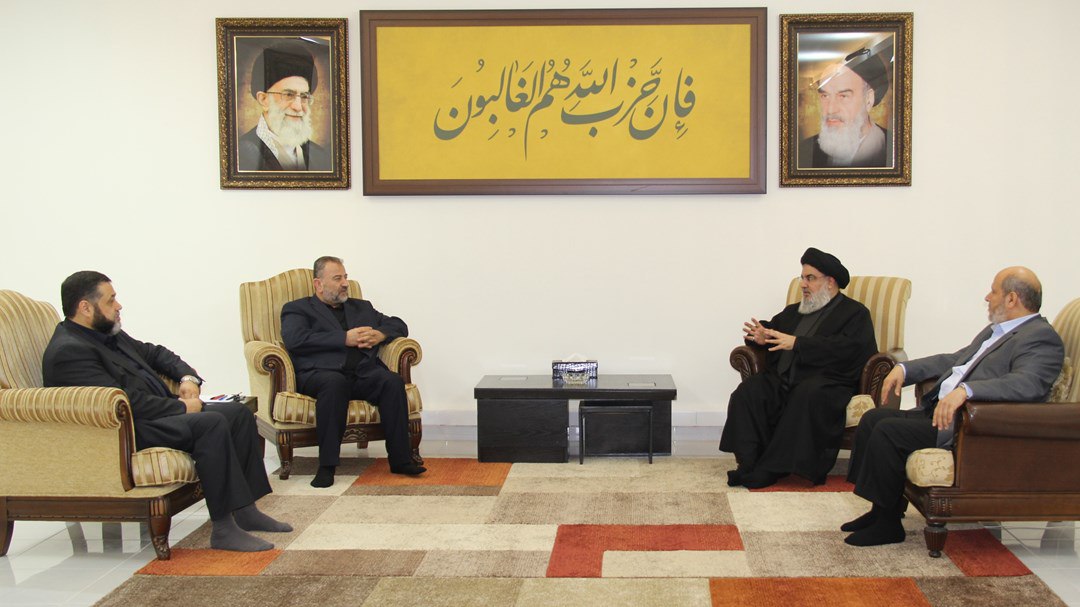 Lebanese media reported on 28 August that Hezbollah Secretary-General Hassan Nasrallah met with a delegation from the Palestinian resistance faction Hamas in Beirut, where they reportedly discussed the most recent developments in Palestine, Lebanon, and across the region.

The meeting was attended by the deputy chief of Hamas’ political bureau, Saleh Arouri, and other senior officials including Khalil al-Hayya and Osama Hamdan, the resistance faction’s representative in Lebanon.

According to a Lebanese media report, it centered around “a review and evaluation of the latest political and field developments in Palestine, Lebanon and the region, especially the recent confrontations in the Gaza Strip, the West Bank and Jerusalem.”

“They discussed what the situation in the region could lead to in light of the developments,” the report adds.

On 27 August, the same Hamas delegation visiting Beirut met with the head of the Palestinian Islamic Jihad (PIJ) resistance faction, Ziad al-Nakhala, who had met with Nasrallah a few days earlier.

“Jerusalem is our eternal capital, and it will remain the center of the conflict, and a symbol for the unity of our people everywhere,” the two resistance groups said in a joint statement following Al-Nakhala’s meeting with the Hamas delegation.

The two factions expressed “their thanks and appreciation to everyone who supports the resistance of our Palestinian people, especially the Islamic Republic of Iran and Hezbollah,” the statement added.

Recently, the three resistance movements have stepped up contact with one another as a result of the recent events in the Gaza Strip, during which high level coordination took place between Hezbollah and the PIJ, as was the case in last year’s Sayf Al-Quds operation.

The three groups have reportedly also been discussing how to deal with any developments that may lead to a full-scale, regional war, as well as with the ongoing maritime border dispute negotiations taking place indirectly between Tel Aviv and Beirut.

Lebanese newspaper Al-Akhbar reported on 19 August that Israel sent a message to Hezbollah through diplomatic channels, saying that it accepts Lebanon’s full demands in the negotiations, but is pleading for extra time to reach a deal.

Israel also reportedly pleaded for Hezbollah to cease its threats of attacking the Karish gas rig, threats which Israel has taken more seriously since the group’s operation near the floating platform in early July.

Recently, Israeli media has suggested that any possible confrontation with Lebanon could eventually expand into a multi-front war that involves Syria, Yemen, and possibly Iran, but most notably Palestine and the resistance factions in Gaza.