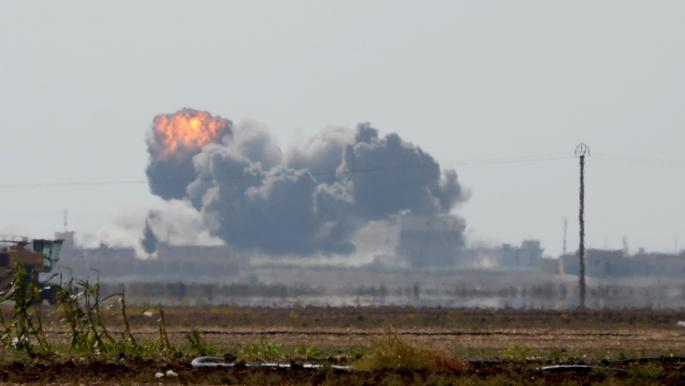 On 3 September, unidentified explosions struck the US military base in Al-Omar oilfield in the eastern countryside of Deir Ezzor.

Local media claimed that the Iranian Revolutionary Guard Corps (IRGC) fired three rocket shells at the US base.

According to eyewitnesses, large explosions followed by flashes of light had struck the US-occupied Al-Omar oilfield in eastern Deir Ezzor countryside.

Other media sources claimed that the popular resistance likely targeted the US base.

The Russian news agency Sputnik reported that a missile attack was carried out by unknown factions, targeting the illegal US base “Green Village” near the Al-Omar oil field.

Sputnik reported the arrival of ambulances at the explosion site to transport possible casualties and wounded to hospitals.

The US-backed Syrian Democratic Forces (SDF) have a large presence in the area.

The Green Village is a US military base established in 2018 to “protect” Syria’s Omar oilfield from Syria and Russia, keeping valuable national resources under the control of US-sponsored groups.

Earlier this month, the Syrian Foreign Ministry reported that the United States stole at least $107.1 billion worth of oil since the US-sponsored war in 2011 began.

A few days ago, four US soldiers were injured in an exchange of fire that occurred between Iranian-affiliated armed groups and US forces stationed near the Conoco gas field in Syria’s northeastern Deir Ezzor countryside.

On 9 August, the Syrian Oil Ministry revealed that “the US occupation forces and their mercenaries steal up to 66,000 barrels per day from the fields they occupy in eastern Syria.”

US-led coalition forces have set up bases in the Al-Omar oilfield, the country’s largest, and the Conoco gas field located on the eastern banks of the Euphrates in 2014 to supposedly fight the Islamic State group.