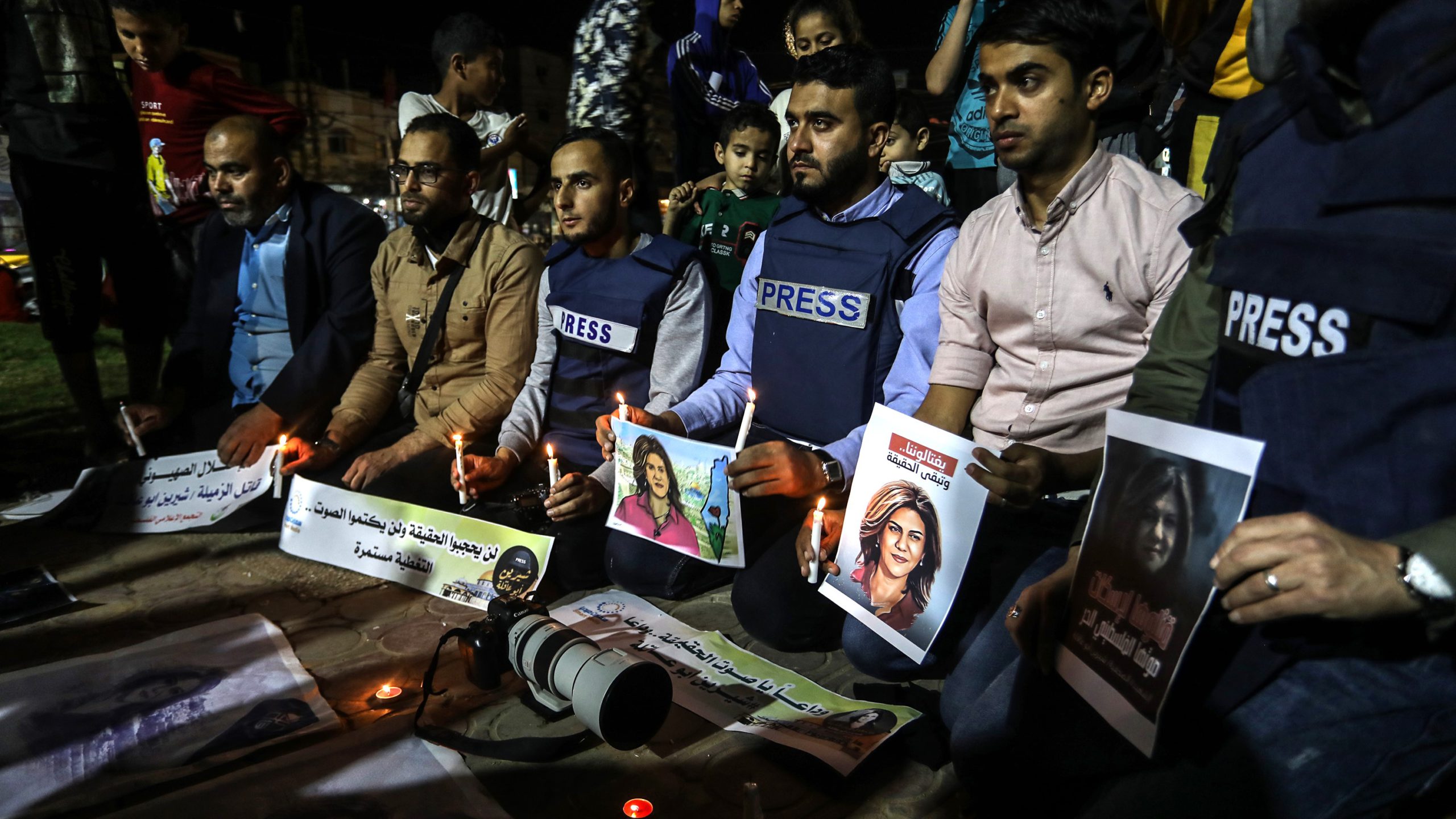 Palestinian journalists take part in a candlelight vigil in the Gaza Strip in memory of Al Jazeera journalist Shireen Abu Aqla, who was killed by an Israeli sniper in Jenin on 11 May, 2022. (Photo credit: Abed Rahim Khatib/Flash90)

Israeli officials released on 5 September the results of their investigation into the murder of Al Jazeera journalist Shireen Abu Aqla, claiming there is a “high possibility” she was “accidentally hit” by an Israeli soldier.

“[I]t appears that it is not possible to unequivocally determine the source of the gunfire which hit and killed Ms. Abu Aqla. However, there is a high possibility that Ms. Abu Aqla was accidentally hit by IDF gunfire fired toward suspects identified as armed Palestinian gunmen during an exchange of fire,” the statement reads.

The renowned Palestinian-American journalist was shot dead on 11 May while covering a raid in the West Bank city of Jenin. At the time, she was wearing body armor clearly labeled with the word “PRESS” on both the front and back.

Contrary to the findings of the Israeli probe, eyewitnesses and UN investigators have maintained that there were no “Palestinian gunmen” in the vicinity of where Abu Aqla was shot.

Moreover, the video of the attack corroborates eyewitness accounts, and shows that the group of journalists continued to be fired upon by Israeli soldiers even after Abu Aqla was killed.

During a briefing for journalists, senior Israeli army officials said they had met with the soldier responsible for firing on the journalists, and claimed that “if he did it, he did it by mistake.”

In response to the Israeli findings, Abu Aqla’s family issued a statement on Monday accusing officials of trying to “obscure the truth and avoid responsibility for killing Shireen.”

“As expected, Israel has refused to take responsibility for murdering Shireen. Our family is not surprised by this outcome since it’s obvious to anyone the Israeli war criminals cannot investigate their own crimes,” the statement reads.

“We will continue to demand that the US government follow through with its stated commitments to accountability.”

Washington, for its part, stressed the need for “accountability” while also welcoming “Israel’s review of this tragic incident.” They also called on Tel Aviv to “prevent similar incidents from occurring in the future.”

Israel’s findings were released just one day after another Palestinian journalist, Nidal Abu al-Aila Ighbariya, was shot dead in the occupied territories by “unidentified gunmen.”

Nidal had been the target of death threats before his murder. According to his family, the Israeli police were “unexpectedly inactive” after several complaints were filed.

Officials later claimed the journalist, who was on her way to her first day at work, approached them with a knife before being shot. No evidence of this was provided.

According to Palestinian news agency WAFA, well over 50 Palestinian journalists have been killed in the occupied territories since the year 2000.