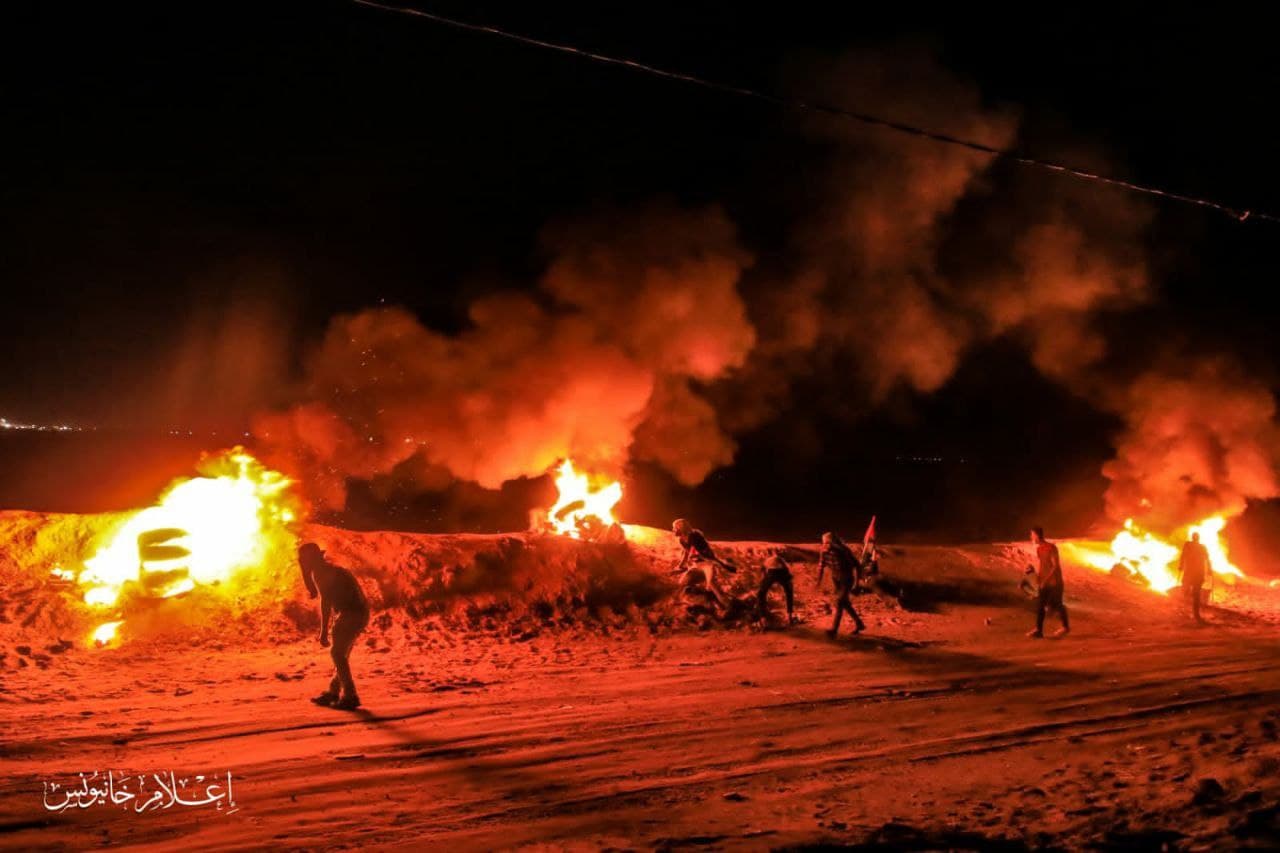 Over the past week, residents of Khan Yunis in the occupied Gaza Strip have been gathering along the border separating Israel and Gaza to hold protests using a new, non-violent resistance method known as “night confusion.”

During these protests, Palestinians burn tires, shine lasers, set off fireworks, and use loudspeakers to “confuse” settlers and occupation forces.

The residents of Khan Yunis recently stepped up the nightly gatherings in the eastern Gaza Strip in rejection of Israel’s apartheid policies, the delay in the reconstruction of the Gaza Strip following Israel’s bombing campaign last May, and the delayed disbursement of Qatari funds.

But despite their non-violent nature, the protests are often met with excessive violence by occupation troops who have killed over a dozen protesters and injured hundreds more, most recently shooting a 26-year-old Palestinian man in the chest on 2 September.

Last week, occupation forces launched renewed airstrikes in the Gaza Strip, the world’s largest open-air prison, after a protester injured an Israeli sniper during one of the gatherings. Israeli drones also often fire stun grenades and tear gas canisters at the protesting youths.

Similar night confusion protests were used by Palestinians during the Great March of Return uprising in 2018, but they regained notoriety in the town of Beita in the occupied West Bank, where young Palestinians have been leading the resistance against the expansion of illegal Israeli settlements.

“On Fridays, we young men go out with slingshots, while the old people go out carrying Palestinian flags. We also use burning tires, fireworks and balloons,” a 25-year-old protester is quoted by Middle East Eye as saying.

Protesters say that the methods have been successful in pressuring settlers to evacuate the outpost.

They also say that night confusion activities are a grassroots movement without affiliation to either Fatah or Hamas, and that the events are funded by the protesters themselves. The gatherings also attract thousands who do not take partake in regular protests.

“Here there is only one flag: that of Palestine. There are no factions,” a protester told AFP last week.

Israel’s policy of allowing the spread of illegal settlements in the occupied territory remains one of the core issues in the conflict.

Illegal settlements are regularly built without previous notice on stolen Palestinian land in the occupied West Bank and East Jerusalem – where some 650,000 Israelis now live.

“They are a major obstacle to the achievement of a two-state solution and to a just, lasting and comprehensive peace,” the UN statement added.

Meanwhile, US President Joe Biden reportedly told Bennett during his visit to the White House last week that Washington opposes the expansion of illegal settlements. However, the US has taken no steps to pressure Israel to stop building or expanding the settlements.