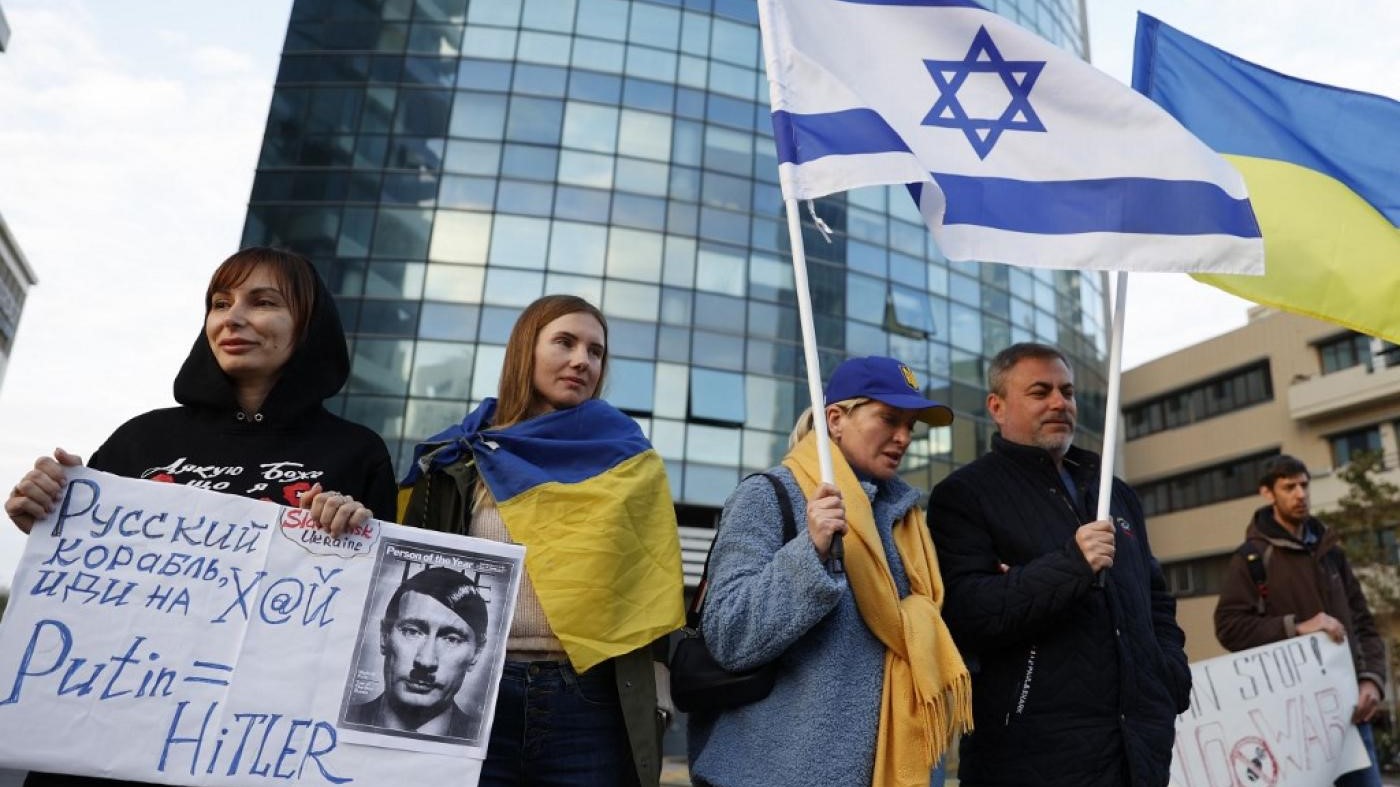 A demonstrator holds up a sign showing the face of Russian President Vladimir Putin made to resemble Nazi Germany’s Adolf Hitller during a protest in Tel Aviv on 26 February, 2022. (Photo credit: AFP)

The Ukrainian government asked Israel to share intelligence on “any support” Iran is giving to Russia, according to unnamed senior Israeli officials that spoke with Axios.

But while Tehran officially denies providing military aid to Russia – despite having several defense cooperation agreements – earlier this month, Iranian drones were spotted for the first time in Ukraine.

Moreover, over 40 Iranian cargo planes have landed in Russia since February for unannounced purposes, according to Netherlands-based airplane tracker Gerjon.

According to a Ukrainian official that spoke with Axios, Tel Aviv provided Kiev with “some” of the intel it requested.

“The Israelis gave us some intelligence, but we need much more,” the official is quoted as saying.

The request was made during a visit to the Ukrainian capital by Israel’s deputy director general for Euro-Asia, Simona Halperin. Here she met with Maksym Subkh, Ukraine’s special representative for West Asia, who has been working to establish a “dialogue channel” with Tel Aviv.

Reportedly, establishing this channel is of great importance to Kiev due to the growing cooperation between Iran and Russia to confront western sanctions.

Ukraine and Israel are also on the same page in opposing a revival of the Iran nuclear deal, as officials claim this would enable “greater” military cooperation between Tehran and Moscow.

While initially hesitant about fully taking sides in the war, in recent months Israel has deepened its cooperation with Ukraine, drawing the Kremlin’s ire.

Last week, Hebrew media revealed that an Israeli defense contractor is supplying anti-drone systems to Ukraine’s military by way of Poland, in order to circumvent Israel’s official stance of not selling advanced arms to Kiev.

According to the report by Zman Yisrael, the defense company reported to the Defense Ministry that the sale was made to Poland, claiming it was not aware of the fact that Warsaw was acting as an intermediary to transfer the weapons to Ukraine.