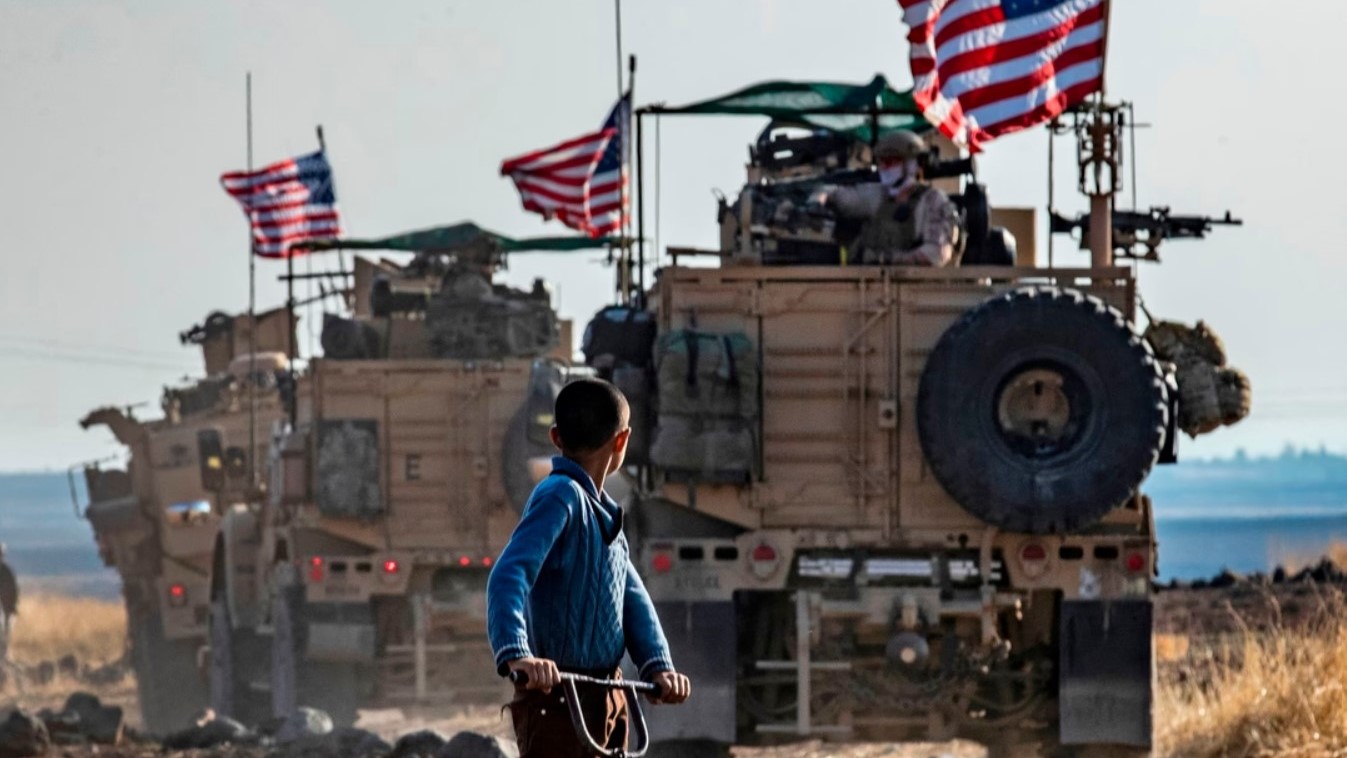 A Syrian boy on his bicycle looks at a convoy of US armored vehicles patrolling fields near the northeastern town of Qahtaniyah at the border with Turkey. (Photo credit: Delil Souleiman/AFP via Getty Images)

US occupation troops brought in weapons, munitions, and logistics equipment from their bases in Iraq to Syria’s Hasakah governorate earlier this week, according to local sources.

The military convoy reportedly entered Syria through the Al-Waleed border crossing late on 26 September. It included 33 vehicles loaded with military equipment and headed for US occupation bases in the town of Rmelan.

A US military cargo plane was also spotted landing at the occupation base at Kharab al-Jeer Airport in the countryside of Hasakah.

Washington’s increased military presence in Syria’s oil-rich region comes as they have intensified an oil trafficking campaign in Hasakah and Deir Ezzor governorates.

According to an independent investigation by The Cradle, dozens of tankers pass through illegal crossings from Syria into Iraq on a weekly basis, in convoys transporting stolen oil that are accompanied by US warplanes or helicopters.

Local sources say that the Syrian oil is transported to the Harir military site in Erbil, the capital of the Kurdistan region of Iraq (KRI), for the benefit of the Kurdish oil company KAR Group, owned by Sheikh Baz Karim Barzanji, who is close to the family of the head of the Kurdistan Democratic Party (KDP), Massoud Barzani.

Over the past 10 days alone, the US army has smuggled well over 100 tankers filled with stolen Syrian oil. According to the Syrian ministry of oil, the US looted an average of 66,000 barrels of oil every day in the first half of 2022, or over 83 percent of the country’s daily output.

Since the start of the war in 2011, Damascus says direct and indirect losses have amounted to about $107.1 billion.

The US maintains approximately 900 troops in Syria, primarily split between the Al-Tanf base and the country’s oil fields, allegedly to protect Syria’s vast resources from falling under the control of ISIS.