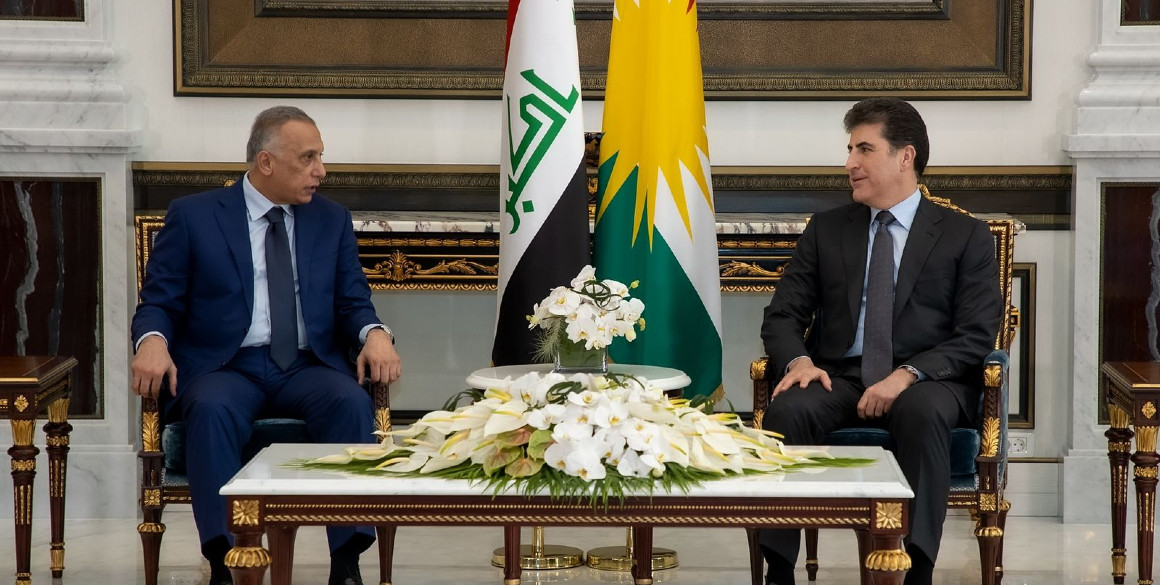 Iraq’s Prime Minister Mustafa al-Kadhimi met with the President of the Iraqi Kurdistan Region (IKR) Nechirvan Barzani, to discuss the security and sovereignty of the country on Monday 3 October.

The meeting was focused on efforts by the federal and Kurdistan Regional Government (KRG) to promote peace and dialogue, as well as work on a framework for producing solutions to the problems affecting Iraq as a whole.

The parties also discussed the recent incursions of Iranian drones and the targeting of militant groups in Iraq’s Kurdistan border region with Iran, stressing the importance of Iraqi sovereignty and preventing terrorist groups from launching attacks on Iraq’s neighbors.

On 29 September, Baghdad summoned Iran’s ambassador over artillery strikes on the Kurdistan region in Iraq, which have caused the death of nine people, while other sources such as Al-Jazeera place the toll at 13.

However, unofficial reports across Telegram and Twitter from accounts linked to Iran’s Islamic Revolutionary Guard Corps (IRGC) say the death toll has in fact exceeded 40.

Tehran has launched several attacks on targets inside Iraq’s Kurdistan region since 24 September, following attempts to smuggle arms to militants inside Iran.

The IRGC released an official statement on 24 September regarding the strikes on targets in Iraq, claiming the operation was necessary to “provide security, punish the perpetrators, and push the Kurdistan region’s authorities to assume responsibilities for their legal duties.”

The president of the semi-autonomous IKR, Nechirvan Barzani, has also been in the crosshairs of a corruption investigation.

According to an investigation by The American Prospect, the regional president has been linked to a money laundering scheme in the US, involving secret investments worth hundreds of millions.

While only one of the US properties has been directly linked to the IKR president, the investigation by The American Prospect identified nearly 300 properties, with a combined worth in the nine-figure range, connected to the president’s relatives and associates.

Mustafa al-Kadhimi has also often been described as a US asset by his opponents, as his questionable rise to power from an unknown local journalist to the chief of Iraq’s military intelligence service and prime minister in just three years raised many eyebrows.

From 1999 to 2003, he worked as director of programming for Radio Free Europe’s Iraq service and held this position throughout the entire buildup to the illegal US-led invasion of Iraq. Radio Free Europe was founded in 1949 as a CIA front organization to disseminate US propaganda during the Cold War.

After the invasion, Kadhimi directed the Iraq Memory Foundation (IMF), an organization set up by Kanaan Makiya, an Iraqi “dissident” who collaborated with and enjoyed a direct relationship with the White House and Pentagon.