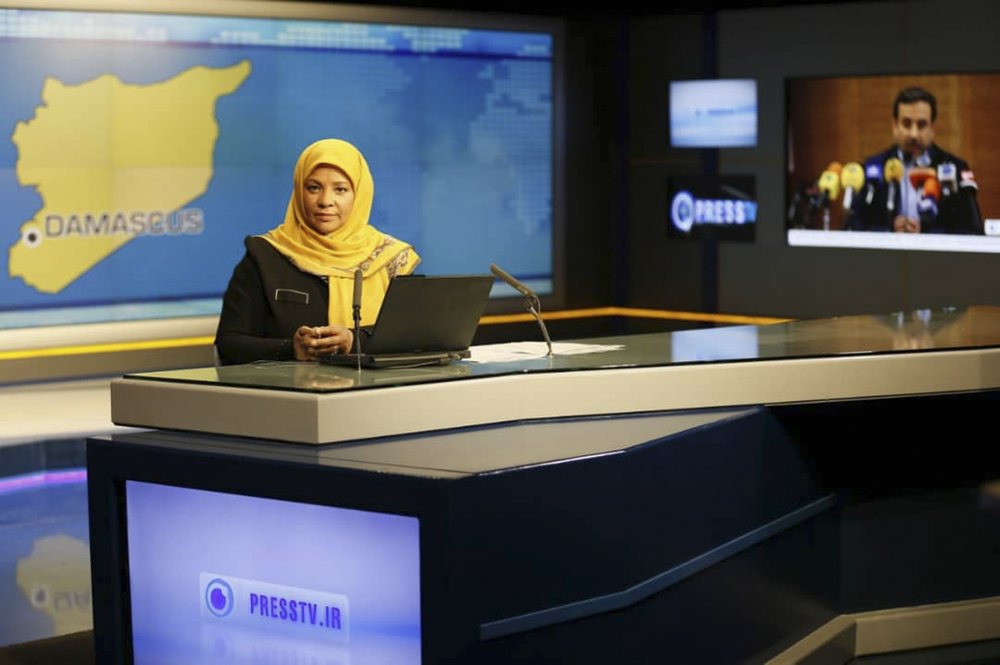 US-born PressTV news anchor Marzieh Hashemi, who in 2019 was arrested by the FBI and imprisoned for 11 days without charge. (Photo credit: PressTV via AP)

The Canadian government imposed a number of new sanctions against Iran on 3 October, targeting several Iranian individuals and institutions, including Press TV, listing the news organization as an entity in “grave breach of international peace and security.”

“These sanctions are in response to gross human rights violations that have been committed in Iran, including its systematic persecution of women and in particular, the egregious actions committed by Iran’s so-called ‘Morality Police,’ which led to the death of Mahsa Amini while under their custody,” Ottawa said in a statement.

Among the individuals targeted with sanctions are the Intelligence Minister himself, Esmail Khatib, the chief commander of the IRGC Hossein Salami, and the chief of staff of Iran’s Armed Forces, Major General Mohammad Baqeri.

The Basij Force, the country’s anti-riot police, has also been targeted by the Canadian sanctions, as well as Press TV, which over the past few weeks has been reporting on the unrest taking place across the Islamic Republic.

In June of 2021, Press TV saw its website seized by the US Justice Department for alleged “disinformation campaigns and malign influence operations.”

Tehran called the illegal seizure an example of a “systematic effort to distort freedom of speech on a global level and silence independent voices in media.” Facebook also permanently shut down the English-language page of the news outlet, accusing the broadcaster of failing to “follow our Community Standards.”

Two years before this, in 2019, the FBI arrested Press TV reporter Marzieh Hashemi in Washington DC and held her in custody for 11 days without charge.

Canada’s actions this week fall in line with the popular western strategy of banning or sanctioning media outlets associated with countries deemed to be adversarial, such as Russia, China, Venezuela, and Iran.

Following the Kremlin’s military invasion of Ukraine, the UK and EU imposed sanctions on Russia Today (RT), with Canada introducing a formal ban on the Russian outlet.

In recent years Washington and its allies also targeted Venezuelan news outlet teleSUR, going so far as to unilaterally appoint a new administration for the South American news outlet that would operate from Miami.

Iran has been rocked by popular unrest for the past several weeks after the death of 22-year-old Mahsa Amini, who fell into a coma in the hours after being detained by the Moral Security Police on 13 September. She passed away at a hospital three days later.

Dozens of protesters and security forces have died in the violence, including at least two commanders of the IRGC last week.

“I state clearly that these developments were planned by America, the Zionist regime and their acolytes. Their main problem is with a strong and independent Iran and the country’s progress,” Iranian Supreme Leader Ali Khamenei said in a speech on 3 October.