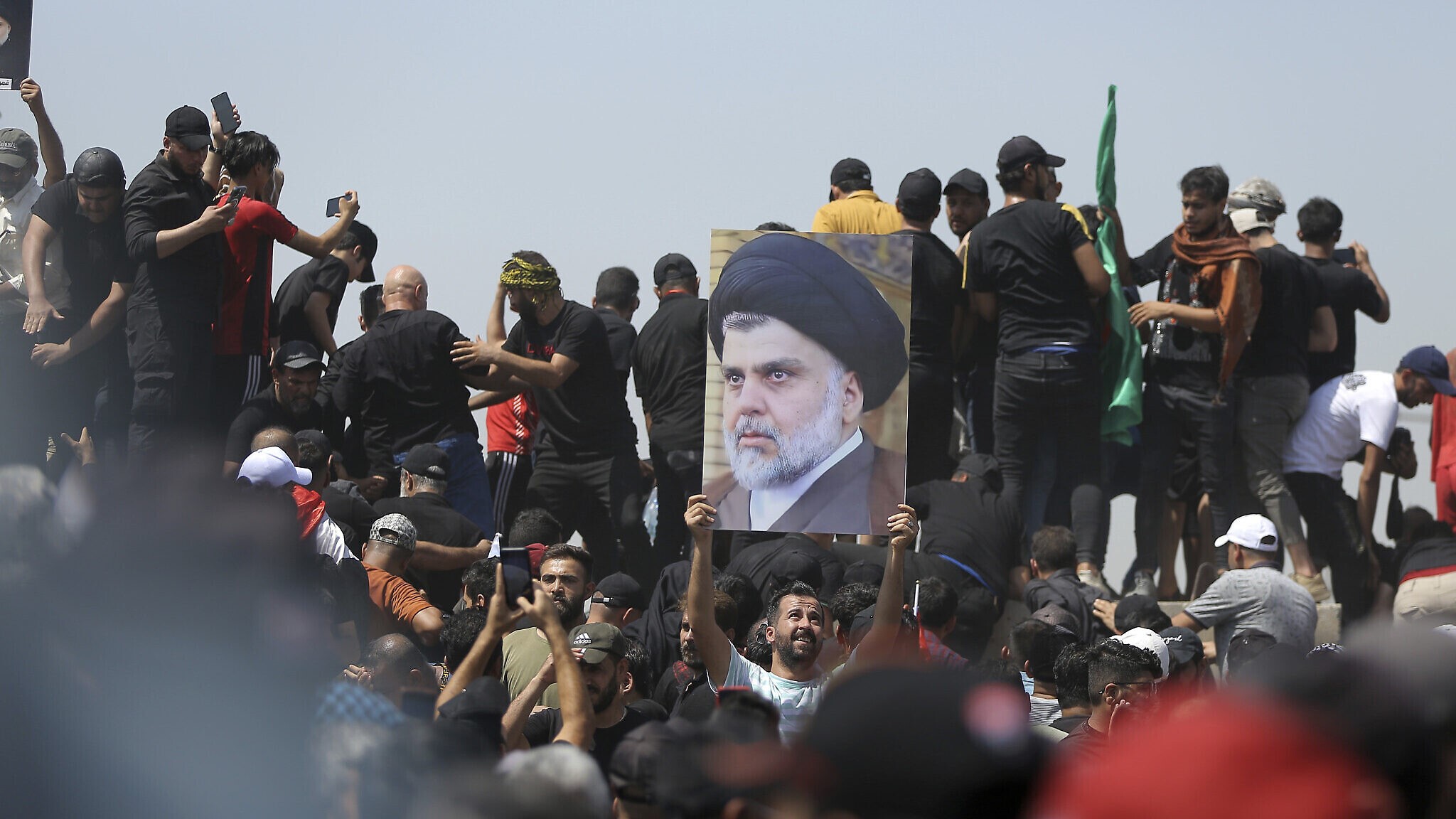 Scores of supporters of Iraqi cleric Muqtada al-Sadr stormed and vandalized the headquarters of the Al Rabiaa TV news station in central Baghdad on 4 October.

The attack on the station came in response to an alleged “offense” against the Sadrist armed militia – the Saraya al-Salam brigades – made by one of the channel’s anchors.

Al Rabiaa TV released a statement condemning the Sadrist movement for inciting the attack via its Telegram channels, calling it part of their “silencing policy.”

“The channel reserves its legal right to sue those who committed this act and those who stood by and watched without moving a finger,” the statement stressed.

Caretaker Prime Minister Mustafa al-Kadhimi also issued a statement on Twitter, saying: “The attack on an Iraqi media outlet, and the threats made to the lives of its employees, is a reprehensible act and represents the highest level of transgression against the law and freedom of the press and does not fall within the peaceful and legal practices and protests.”

The raid on Al Rabiaa TV by the Sadrists happened on the same day that Saraya al-Salam brigades launched several rockets against the headquarters of the Popular Mobilization Units (PMU) in the southern city of Basra.

According to a report by Middle East Eye (MEE), near-daily armed clashes between the Sadrist armed group and fighters of the PMU-affiliated Asaib Ahl al-Haq militia have been taking place over recent weeks.

Most of these attacks are launched by the Sadrist fighters, targeting the presidential palace complex in Basra, Asaib Ahl al-Haq’s headquarters, and the homes of a number of its commanders.

Local sources that spoke with MEE say these clashes have left at least four people, three of them Sadrists. However, on Tuesday the PMU claimed at least 12 Saraya al-Salam fighters were killed in the wake of the rocket attack.

MEE says that the violence is an attempt by Sadr and his supporters to disrupt the oil income of the PMU in southern Iraq, as Basra hosts four of the six largest oil fields in the world.

Despite announcing his retirement from political life twice this year – reaching nine times in total since 2013 – Sadr has done little to stop his followers from pushing Iraq over the brink.

Last week, Sadr shot down the possibility of returning the members of his political bloc to parliament using a legal loophole, as a legal advisor to parliament ruled their resignations illegal citing a lack of proper procedure.

“Everyone was surprised by Sadr’s refusal to return to the parliament … The decision was shocking to the narrow circle close to Sadr,” a Sadrist leader that spoke with MEE said.

“All indications were suggesting a breakthrough and everyone [the Sadrist leaders] was satisfied with this face-saving solution. But he surprised everyone with his refusal,” he added.

Instead of using this loophole to regain his position as kingmaker and marginalize his rivals in the Coordination Framework (CF), Sadr has doubled down on his demands that new elections must be called, refusing to entertain any talks that might lead to a political solution that satisfies all parties in Iraq.

Iraq has been mired in a political crisis since last October’s elections, when the Sadrist bloc left other Shia parties in the dust.

However, in the intervening months, Sadr failed to achieve his goal of forming a “majority government” that excluded the CF, despite forging close ties with the Sunni and Kurdish blocs.

Sadr’s multiple failures eventually led him to withdraw all of his lawmakers from parliament and to fuel discontent among his large base of supporters, instructing them to take over government buildings to demand the dissolution of parliament and a new round of elections.