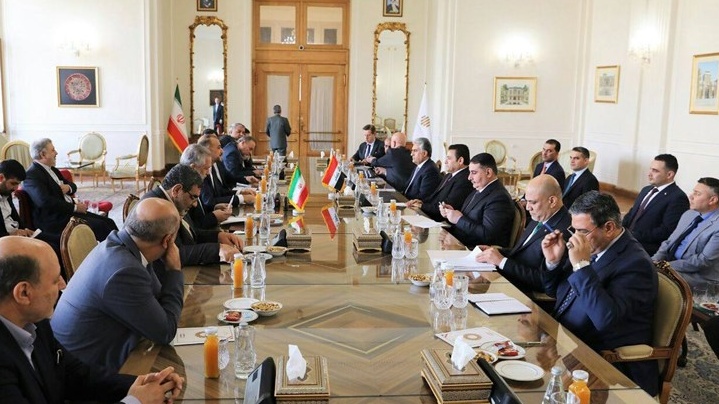 The Iranian Minister of Foreign Affairs Hossein Amir-Abdollahian hosted a delegation from Iraq on 15 October, headed by National Security Adviser, Qassem al-Araji, to tackle the recent operations on their shared border.

In a statement issued by the Iranian ministry, Tehran commended the improvement of Iranian-Iraqi relations and expressed satisfaction with the deepening of the “strategic and excellent” coordination between the two countries.

However, Amir-Abdollahian also expressed Tehran’s dissatisfaction with Baghdad and Erbil’s lack of action to counter the armed Kurdish opposition groups operating in the Kurdistan region against Iran, which it will not tolerate.

Amir-Abdollahian accused both Iraq and the Kurdish Regional Government (KRG) of failing to curb the activities of the Kurdistan Freedom Party (PAK), the Kurdistan Democratic Party of Iran (KDPI), the Free Life Party of Kurdistan (PJAK), and the Komala party.

In the wake of the protests that were triggered by the death of Mahsa Amini in September, Iran accused the Iraq-based leaders of the Kurdish parties of orchestrating the unrest in Iranian’s northern provinces, prompting a military response by Tehran.

On 28 September, Iran’s Islamic Revolutionary Guard Corps (IRGC) launched dozens of ballistic missiles and suicide drones at a base in Koya, 60 km east of Erbil, targeting the militant groups. At least 13 fighters were killed, in addition to 3 civilians.

In response, Araji stressed that Iraq’s constitution does not authorize the activities of outlaws, has high regard for the security of neighboring countries, and bans any terrorist activity on Iraqi soil.

The Iraqi National Security adviser also added that the central Iraqi government and the KRG vow to confront any actions targeting the security of both Iran and Iraq.

He concluded by announcing that Iraq regards Iran’s security as its own.

Nevertheless, earlier on 29 September, Iraq’s Ministry of Foreign Affairs summoned the Iranian ambassador in protest of the IRGC strikes in the Kurdistan region.

The ministry condemned Iran’s operation, and accused Tehran of violating Iraq’s sovereignty, calling on its armed forces to abide by international law.

The Chief of the General Staff of the Iranian Armed Forces and IRGC military commander, General Mohammad Bagheri, made it clear that Iranian operations inside the Kurdistan region of Iraq will continue as long as the threat to Iran’s security remains.