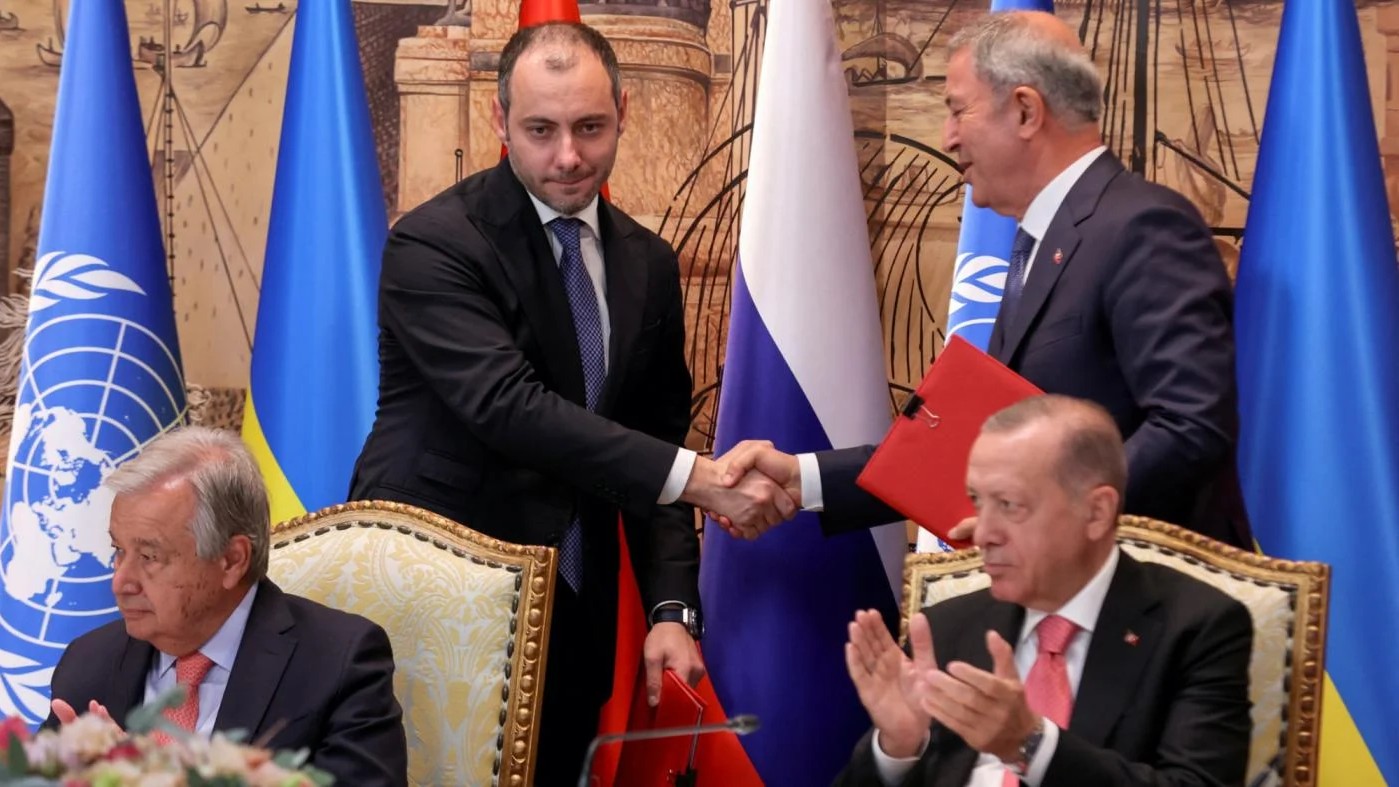 On 16 October, the Turkish Defense and Ukrainian Infrastructure Ministers, Hulusi Akar and Oleksandr Kubrakov visited the Joint Coordination Center in Istanbul, which was established as a distribution center for Kiev’s grain exports.

Akar and Kubrakov have mutually praised that millions of tons of Ukrainian grain have been distributed to markets around the world through Turkey.

This follows the 22 July UN-brokered agreement between Moscow and Kiev to allow for the resumption of Ukrainian grain exports from the Black Sea ports.

According to Akar, 345 vessels shipped 7.7 million tons of grain from Ukrainian ports in the past three months, which resulted in food prices significantly dropping.  Kubrakov also thanked Turkish President Recep Tayyip Erdogan and Akar for assisting Kyiv in opening its grain corridor.

He also thanked Ankara for mediating in the recent prisoner swap between Russia and Ukraine in September. Erdogan met with Russian President Vladimir Putin earlier this week and affirmed that Moscow is determined to continue Ukrainian exports to leave the Black Sea ports, as well as the transfer of Russian grain and fertilizers to less developed countries.

Turkey has remained neutral in the Russia-Ukraine conflict ever since its start in February of 2022, however, Turkish company Baykar is currently in the process of building a factory to produce attack drones on Ukrainian territory.

Moreover, Turkey does not recognize Moscow’s “annexation” of Ukraine.

Ukrainian ambassador to Turkey Vasyl Bodnar claims that Baykar has already bought land and is in the process of constructing the drone manufacturing factory.

A Ukraine-based factory of the Turkish TB2 attack drones could change the situation in Ukraine. However, there is no factual information about when the factory would be completed, whether or not it is genuinely under construction, or even when it would start.

US media outlet Financial Times (FT) reported on 15 September that the US and EU have increased pressure on Turkey to impose sanctions on Russia, warning against cooperation between Ankara and Moscow, despite Turkey doubling its Russian exports in 2022 and its preparation to boost bilateral cooperation in energy and trade.