The US-brokered maritime border demarcation agreement between Lebanon and Israel in October establishes legal boundaries between the two countries for the first time ever, largely along a demarcation referred to as Line 23.

So, who came out on top in this long-running, geopolitically contentious dispute? The answer depends largely on who you’re asking, on which side of the border, and even then it is not straightforward.

For those Lebanese who believe the issue was resolved in their favor, they ignore the profit share lost by abandoning their original (Line 29) maritime claim, which was clearly supported by international law. Those maritime ambitions could have been fully realized had previous Lebanese governments not floundered in negotiations, and if this administration had stuck to its guns.

Issam Khalifa, a professor of history at the Lebanese University and an expert in cartography and border demarcation agrees with this assessment. According to Khalifa, citing documented international borders and historical agreements (Boulaye-Newcamp, for example), Line 29 is in fact the border of Lebanon’s exclusive economic zone, not Line 23, which has led to Lebanon losing 1,430 square kilometers of its territorial waters.

The only language Israel understands

The view of other Lebanese, particularly those who are in resistance group Hezbollah’s political orbit, is that this maritime agreement delivers to Lebanon more than Israel intended, and that Hezbollah’s threats are responsible for coercing Tel Aviv to limit its usual territory-grabbing ambitions (Line 1) and reluctantly accept Line 23. 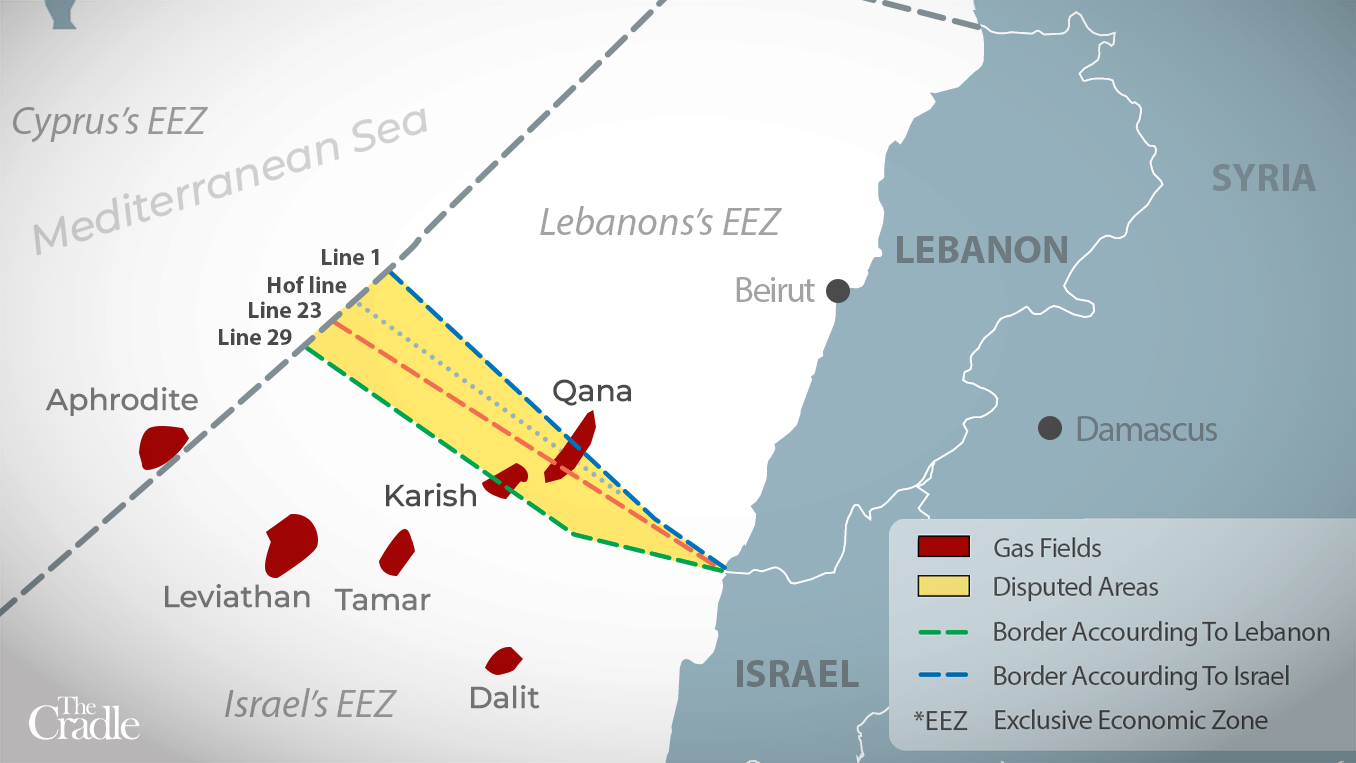 This opinion appears to be based on political realism rather than any strict interpretation of Lebanon’s legal border rights, as the country is in the midst of an unprecedented economic collapse, coupled with rising social unrest. In effect, the argument goes, the country needs to start exploring and extracting gas as quickly as possible to help kick-start its financial recovery.

For yet others in Lebanon, the agreement, in and of itself, is worrisome in that it could be a prelude to a nascent form of normalization in relations with the occupation state.

On the Israeli side, those who claim to have secured the more favorable outcome are equally ignoring the potential further gains possible had it not been for Hezbollah’s threats, forcing Tel Aviv to retreat to avoid a war for which it has no appetite.

Although Israel always sought to bolster its economic interests in any maritime deal with Lebanon, instead, today it brandishes the agreement’s “security” benefits. Israeli Prime Minister Yair Lapid made that distinction when he said “the agreement with Lebanon meets our security needs,” a view confirmed by opposition leader Benjamin Netanyahu, who rejected the agreement and considered it a surrender to Hezbollah.

Israeli Interior Minister Ayelet Shaked, leader of the Jewish Home party, acknowledged too that the threats of Hezbollah Secretary General Hassan Nasrallah were a motivation for inking the agreement with Lebanon.

While Tel Aviv’s motives were driven by security concerns, Beirut’s interests in the maritime deal were primarily economic.

Following the agreement, Lapid stated that Israel would receive 17 percent of the potential revenues of the Qana gas field from TotalEnergies – the French company tasked with gas exploration and extraction – while Lebanon ostensibly retains ownership over the entirety of Qana.

Ghorayeb, who has previously warned of “traps” and “concessions” in any US-brokered agreement with Israel, tweeted that “even the start of development in the field (Qana) by the operator (TotalEnergies), requires the approval of the enemy (Israel).”

The facts are thus: Lebanon conceded the valuable Line 29 and settled for Line 23 on the condition that it would retain full ownership of the Qana gas field – a field that has not yet been explored, and whose southern section extends beyond Line 23. Lebanon, it is worth noting, is fully entitled to claim Line 29 – a much more advantageous border – in accordance with Article 121 of the International Law of the Sea.

This is confirmed by rulings of the International Court of Justice (ICJ), the most recent of which was in 2021 over the border dispute between Kenya and Somalia, a situation virtually identical to the dispute between Lebanon and Israel.

A decade of deceit

However the economic collapse in Lebanon, which the World Bank last year classified as one of the three worst economic crises in modern history, makes the need to extract its own natural resources all the more urgent.

This is why many Lebanese urged their government to show greater flexibility during the negotiations – despite the fact that the US, with its historical alliance with and bias towards Israel, acted as mediator in these talks.

Over the course of a decade of negotiations with US mediation, Israel had refused to recognize Line 23, fixed on another, wider line to the north (the Hof line).

Taking advantage of an error made by Lebanon and Cyprus when they signed an agreement demarcating their own maritime borders in 2007, Israel unilaterally adopted this temporary point with Lebanon. Thus, Line 1, which Lebanon objected to, was born, and a disputed area of 860 square kilometers was established between Lines 1 and 23. This meant Lebanon entering its negotiations with Israel from a weaker position.

Israel’s rush to resolve the dispute

Israel’s unprecedented rush to finalize a long-delayed agreement and concede Line 23 is not only because of its desire to position itself as a gas hub for energy-vulnerable Europe, but crucially, in order to avoid a war threatened by Hezbollah.

The Lebanese resistance group has threatened military retaliation if Tel Aviv begins extracting gas from the disputed Karish gas field before a deal with Beirut was finalized.

On 2 July, Hezbollah sent three drones over the Karish field to prove the seriousness of its threats. The drones were dispatched to achieve several goals: to test Israel’s military reaction, capabilities and response time, halt the work of foreign contractors, and demonstrate that the Lebanese resistance was prepared to use force.

The drone event is likely what prompted Israeli strategic planners to prioritize “security gains” over economic ones in the subsequent agreement.

Where is Lebanon’s win?

Lebanon is a country where corruption is rampant in its institutions, and its officials are accused of looting public money. Due to this notoriety many wonder whether extracting these resources will make a difference to the economy and the lives of the average Lebanese.

The country’s current crisis is marked by a short supply of the dollar with which to import essential goods. Lebanon lacks domestic industry – manufacturing, agriculture, the whole spectrum – and has little means of survival except through this oft-repeated government ‘vision’ that the extraction and sale of gas can save the state.

What preoccupies many Lebanese instead is whether those national funds will be utilized to pump life into the state’s economy, or end up in the pockets of the corrupt ruling classes instead.

For starters, nobody quite knows the extractable gas wealth that lies under the Mediterranean Sea. Hezbollah’s Nasrallah, in a recent speech, estimated it to be between $200 billion and $500 billion.

The numbers are enormous of course, but Diana Kaissi of the NGO Lebanese Oil and Gas Initiative, tells The Cradle: “In the best case scenario, 16 trillion cubic feet of gas is expected to be discovered. Lebanon’s profits in this case could reach six billion dollars, distributed over 15 years.”

This huge discrepancy illustrates the difficulty in obtaining realistic figures in Lebanon. But there are even discrepancies in industry estimates on how long it will take to monetize extracted gas.

Various domestic media reports claim that Lebanon needs between five and and seven years to begin exporting gas and receiving revenues, which suggest dark days ahead for the country.

If accurate, can that period be compressed, especially given the urgent global need for gas supply caused by the war in Ukraine?

Rudy Baroudi, an energy consultant, believes that Lebanon “can start producing oil and gas within three years if commercial reservoirs are found a year from now.”

But in order to attract energy companies and benefit from potential explorations, Lebanon is in dire need of carrying out reforms first. “Lebanon is not a good investment unless the government implements reforms that provide the basic guarantees that international companies need to operate in a lower risk environment,” Baroudi told The Cradle.

“Without the rule of law, Lebanon is like a jungle,” he adds. “It is in absolute chaos judicially and financially, and in terms of the absence of regulatory authorities.”

In order to provide Lebanon with urgent financial support, the International Monetary Fund (IMF) requires the implementation of immediate reforms in several sectors within a comprehensive recovery plan, which the Lebanese government has delayed for three years.

The country’s economic crisis is accompanied by political paralysis that has prevented the formation of a government for months, and now risks Lebanon entering a presidential vacuum. This can be avoided if a political settlement is reached to elect a president to succeed President Michel Aoun, whose term expires at the end of October.

Rather than debate who benefits the most from the maritime agreement with Israel, for Lebanon, far more important issues remain – including how to extract its gas in an accelerated time frame, and how to best manage the wealth generated from future gas exports, with justified fears that it will end up in the pockets of the corrupt.

But in Lebanon, where the system is based on sectarian quotas and buying loyalty with government jobs and public money, it is hard to predict whether its citizenry will be able to enjoy a gas windfall, unless necessary reforms are first implemented. Therefore, even a ‘win’ in the maritime agreement can translate to a ‘loss’ on the ground.