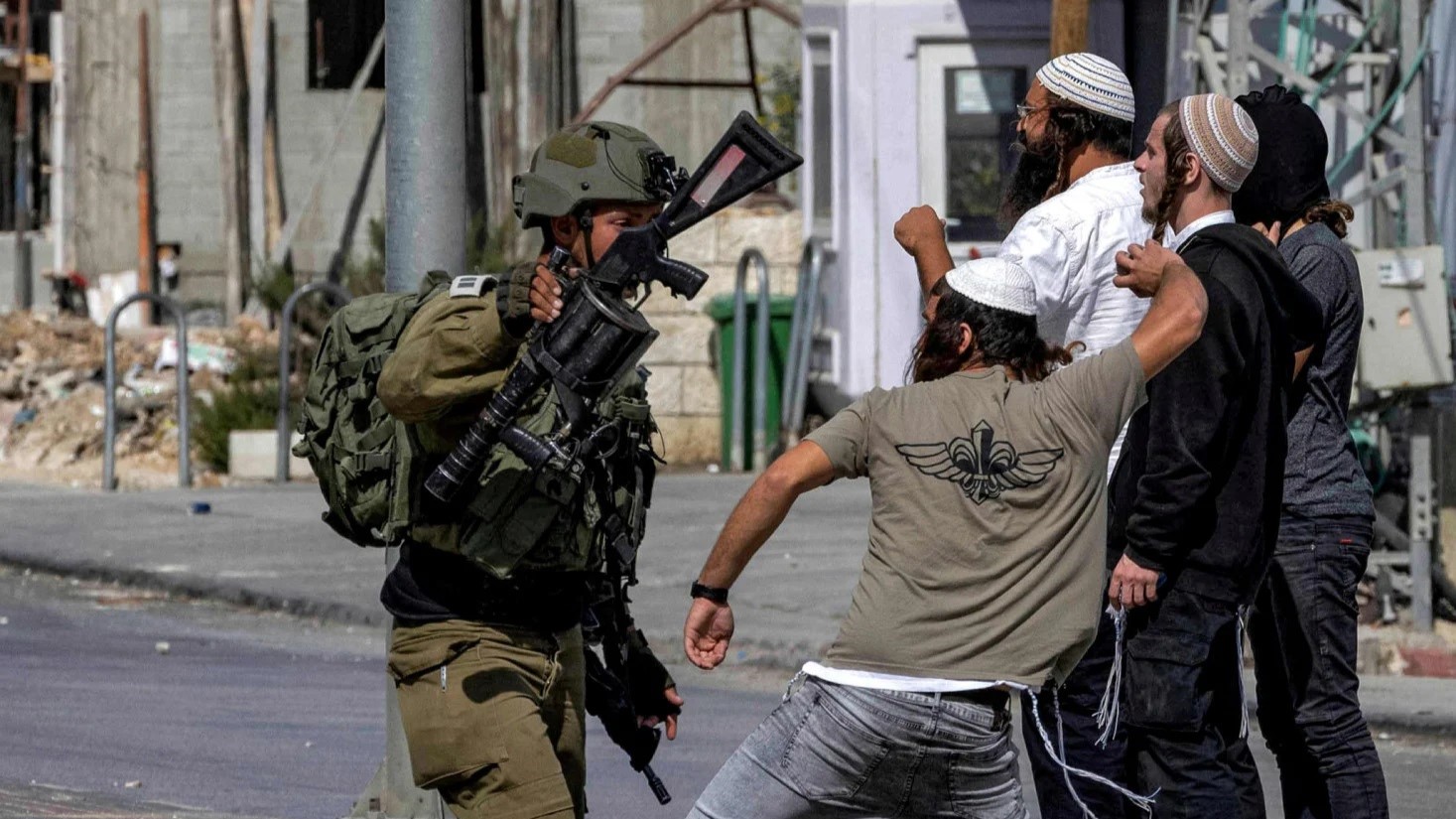 Israeli soldiers stand by as Israeli settlers throw stones at Palestinians in the town of Huwara in the West Bank on 13 October, 2022. (Photo credit: Oren ZIV / AFP)

Israeli settlers clashed with Israeli troops in the early hours of 20 October near Huwara, a Palestinian town in the northern West Bank close to the city of Nablus.

According to an Israeli army statement, the soldiers “were attacked violently, including with pepper spray from several settlers … as a result, the commander of the unit was injured along with another soldier.”

Israeli police, meanwhile, said on Thursday morning that a suspect in his 20s had been arrested in connection with the intra-Israeli violence, as he was found in one of the vehicles that the settlers used to flee the scene.

According to Kan news, the detainee is a resident of a West Bank settlement and a member of the Israeli army.

Before the violence broke out, the settlers were reportedly hurling rocks at Palestinian cars. Officials say that a few hours after this incident, two more Israeli soldiers were pepper-sprayed by settlers near Tapuah Junction, south of Huwara.

“The Jewish outlaws who attacked the [army] soldiers in Huwara are dangerous criminals who must be denounced and brought to justice without hesitation and with the utmost severity,” Prime Minister Yair Lapid said in a statement on Thursday.

Israeli Chief of Staff Lieutenant General Aviv Kochavi also released a statement, saying that “it is inconceivable that [Israeli soldiers] who diligently and devotedly defend Israeli residents would be violently attacked by Jewish settlers.”

“This is an extremely serious incident that embodies shameful and disgraceful criminal behavior,” Kochavi added.

Far-right lawmaker Itamar Ben Gvir, meanwhile, took aim at Defense Minister Benny Gantz over the violence, saying the violence “is further testimony to the politicization that Gantz is trying to introduce to the [army].” He also accused the defense minister of “tying the hands of soldiers [in the fight against terrorism]” while “abandoning the security of the country.”

Tensions across the occupied West Bank have reached a fever pitch over recent weeks in the wake of daily violent raids by the Israeli army, as well as retaliatory attacks by the Palestinian resistance.

Huwara sits on a main road used by both settlers and Palestinians, and there have been frequent rock-throwing attacks against Israeli cars in the area.

Last week, a group of extremist settlers raided Huwara, attacking shops and residents with stones and iron bars, leaving more than 40 injured. In footage of the rampage, Israeli soldiers are seen firing into the air and standing next to the settlers, escorting them during the violence.