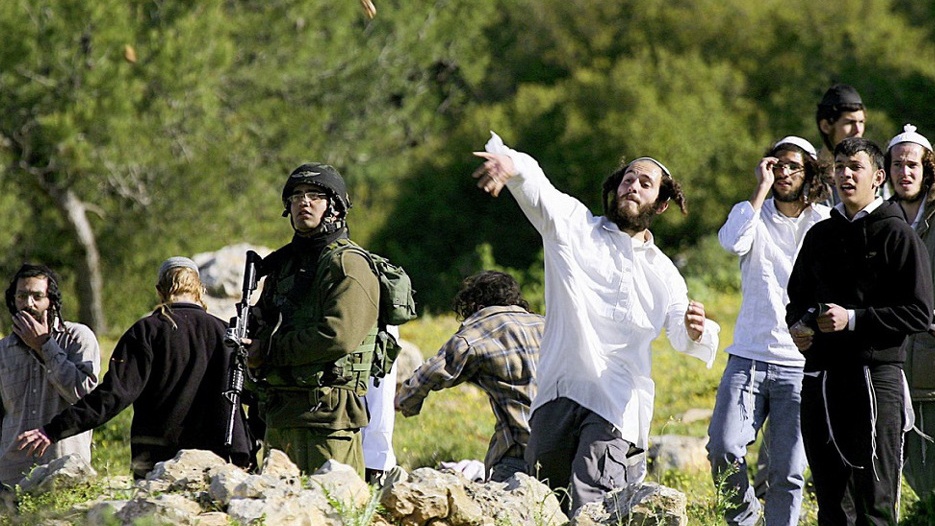 Israeli settlers throw stones at Palestinians, while under Israeli army protection, in the West Bank village of Safa, near al-Khalil. (Photo Credit: Unknown vs Press Tv)

Over the past week, over 100 acts of violence inspired by ‘nationalistic’ motives were committed by Israeli settlers in the West Bank, undeterred by the Israeli army, and on some occasions even under its protection.

The situation continues to escalate, with violence becoming more widespread, and unprecedented in the last 16 years. The army and Shin Bet, Israel’s internal security apparatus, have turned a blind eye, fearing the repercussions of interfering.

Armed with clubs, maces, sticks, and stones, Israeli settlers from the Yitzhar settlement raided the homes of Palestinian locals on 14 October in Hawara, a small village in Nablus.

During the attack in Hawara, several Israeli soldiers were photographed during the pogroms, as olive trees were burned, houses were damaged, and residents were expelled.

“The Israeli army was doing nothing but protecting them,” said Ghassan Daghlas, an official that monitors settlement activities.

Days later, another group of settlers attacked 70-year-old activist Hagar Geffen, while supporting a group of Palestinians in harvesting their olive trees in Kisan, east of Bethlehem. She was hospitalized with broken ribs, a punctured lung, and trauma to the head.

“You are lucky. If you were Arab, we would have killed you,” shouted the settlers before leaving Geffen on the ground.

Simultaneously, the violence went beyond attacks on Palestinians, as settlers targeted Israeli army officers who attempted to stop these attacks or control the soldiers under their command.

On several occasions, outgoing Israeli army Chief of Staff Aviv Kochavi issued rare statements condemning the violence against the army. At one point, the settlers attacked a battalion commander from the Paratroopers Brigade and the former commander of the Golani Brigade.

Kochavi and the officers in the central command are confident that the same settlers attacking the Palestinians have been implicated in attacks against them, yet they are unable to do anything.

The army fears that condemning the settlers or arresting them would be viewed as interference in the ongoing political debate in Israel about the legality of the settlements in the West Bank, and in favor of the leftist parties.

“Strong when facing the Jews in Homesh and weak against the Palestinians in Hawara,” tweeted far-right member of the Knesset Itamar Ben-Gvir in an attack on Yehuda Fuchs, commander of the IDF Central Command that oversees the West Bank.

Despite the aforementioned, the Israeli army has ratified its procedures to allow soldiers operating in the occupied West Bank and East Jerusalem to shoot at any Palestinian who is caught throwing rocks.

The “open-fire” policy allows soldiers to shoot and kill any unarmed Palestinian for the crime of throwing rocks or fireworks, even if he no longer represents an immediate threat and is on the run.

This procedure has been used for years, even before it became an official decree, resulting in the deaths of countless teens who were participating in protests all over the occupied territories during periods of unrest.

On 20 October, 16-year-old Mohammad Fadi Nouri succumbed to his wounds sustained from Israeli gunfire, while observing the riots near Bet El in Ramallah on 28 September.

Similar to Nouri, during the month of October, six Palestinian teens were murdered, with the youngest being only 12 years old.

Six Palestinian boys have been killed by Israeli forces since the beginning of October.