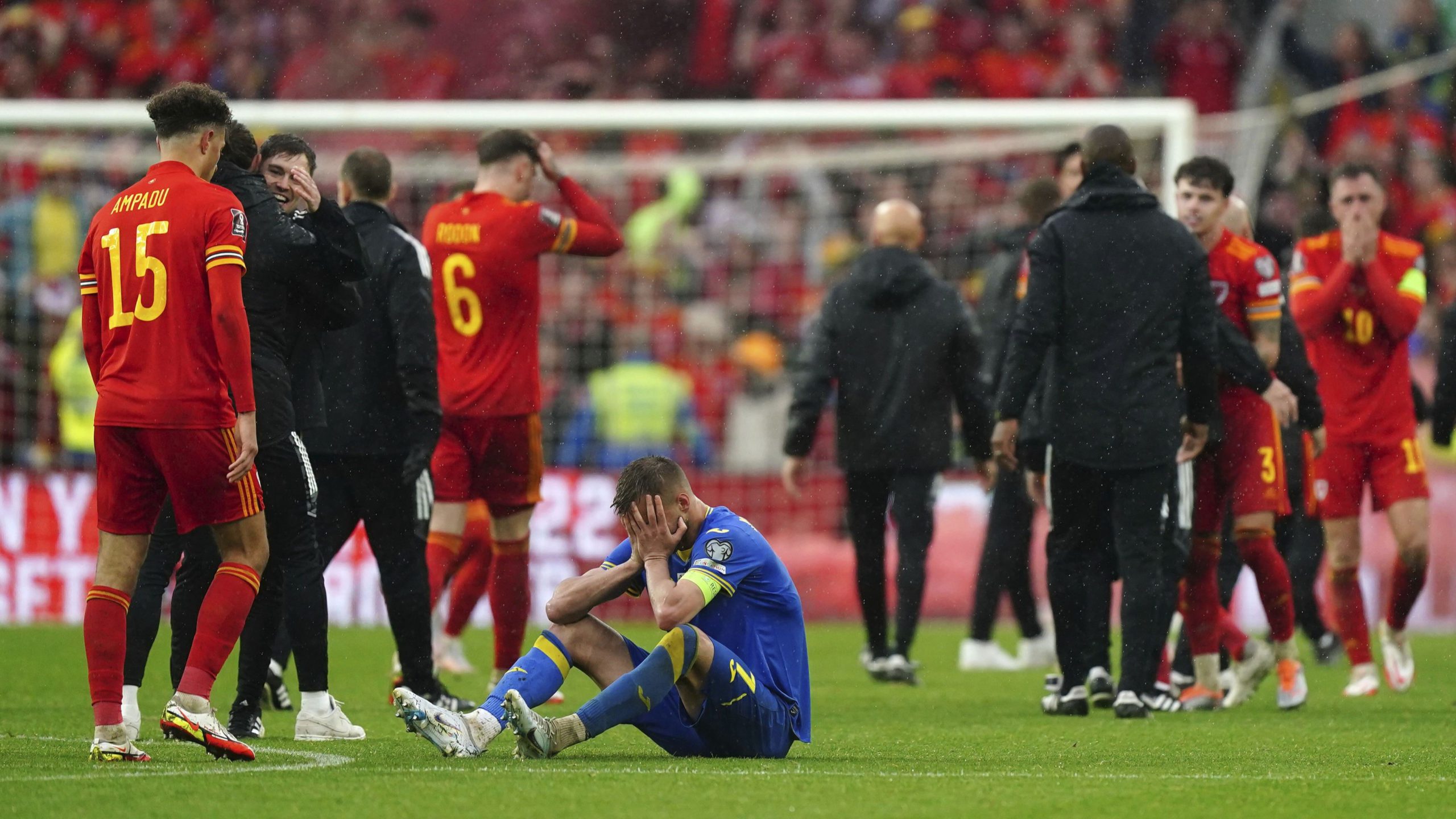 A dejected Andriy Yarmolenko of Ukraine sits after giving up an own goal in a World Cup 2022 play-off final soccer match with Wales. (Photo credit: AP)

Pressure is mounting on FIFA as football club Shakhtar Donetsk is joining the calls of the Iranian rights group ‘Open Stadiums’ to ban the Iranian football from the World Cup in Qatar, and instead replace the team with Ukraine, which lost its play-off match on 5 June against Wales with 0-1.

The club released a statement on 24 October by CEO Sergei Palkin, who argues that such a move would be “historically and sportingly justified.”

“While the Iranian leadership will have fun watching their national team play at the World Cup, but Ukrainians will be killed by Iranian drones and missiles. Almost 250 such drones have already attacked peaceful cities of Ukraine,” the statement reads.

“Shakhtar Football Club calls on FIFA and the entire international community to immediately ban Iran’s national team from playing at the World Cup for the country’s direct participation in terrorist attacks on Ukrainians,” Palkin added.

The football CEO is not alone in his calls to ban the Iranian team from the World Cup. ‘Open Stadiums’ sent a letter to FIFA on 30 September to demand a ban over Tehran’s crackdown on anti-government protests which have gripped the country since the death of Mahsa Amini.

As Iranian football fans, with heavy heart we asked FIFA, due to ongoing human rights violation based on Articles 3-4 of its statutes, immediately expel Iran from #Qatar2022 Worldcup.

Meanwhile, calls for a ban have received mixed reactions from social media users, with one account comparing it to the wars in Afghanistan and Iraq, while another ridiculed the idea, suggesting that matches should be replayed until Ukraine wins.

Total nonsense, politics has no place in football. FIFA was wrong to ban Russia from the games would also be wrong to ban Iran from the games. Ukraine has 2 qualify like every other team. I can't remember iraq & Afganistan given special treatment afta they were invaded by the USA https://t.co/4LdLOocsBb

And then if Ukraine plays better but loose the game! We will have rematch! Until Ukraine gets to the final and lift the cup! Possible!! Right is on the side of Ukraine

This is absurd. Can we replace the USA men's team with the team from a country which has been bombed with US-manufactured weapons? Jesus, the double standard here

The World Cup will kick off in Qatar on 20 November, with the host country playing against Ecuador in the opening match.

The Iranian football team is scheduled to face off against England a day later and will play the United States and Wales, which defeated Ukraine in the play-offs, in the same group. The teams finishing first and second in the group will qualify for the next round.