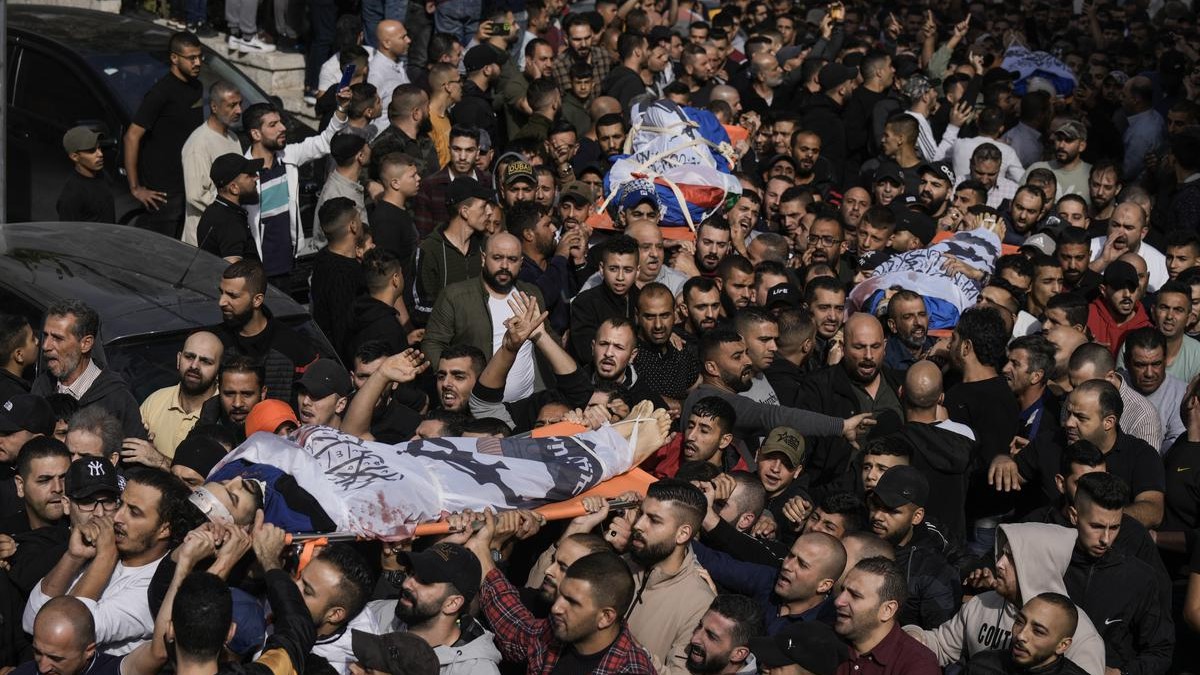 Mourners carry the bodies of Palestinians killed during an overnight Israeli raid in the occupied West Bank city of Nablus, on 25 October, 2022. (Photo credit: AP)

Israeli Defense Minister Benny Gantz heavily criticized Arab-Israeli member of the Knesset (MK) Aida Touma-Suleiman for a social media post in which she expressed solidarity with the victims of Israel’s nightly raids in the occupied West Bank.

“Ashamed of elected officials who support terrorists and are willing to allow them to continue to spill the blood of Israeli citizens,” Israel’s outgoing war chief said in a tweet on 25 October.

Gantz went on to say that “Touma-Suleiman proves once again that the [Hadash–Ta’al] joint list cannot be integrated into the government and cannot be relied upon,” before concluding that “Israel’s security precedes the formation of a [ruling] coalition.”

Earlier on Tuesday, Touma-Suleiman posted pictures of the massive funeral procession for the six martyrs killed in Nablus overnight by Israeli forces.

“Nablus bid farewell to our martyrs today. Our Palestinian people bid farewell to their martyrs. The more the occupation increases its crimes, the resistance escalates. An essential lesson in the history of peoples,” the Arab-Israeli MK wrote on Facebook.

Tel Aviv has launched near-nightly raids across the occupied West Bank over recent months, in a desperate attempt to quell growing resistance against the occupation’s crimes.

The city of Nablus recently became the main target of these raids, as the Israeli army has been hunting down the leaders of the Lion’s Den resistance faction, which has claimed responsibility for several retaliatory attacks against Israeli soldiers and settlers.

In the early hours of Wednesday, occupation troops once again stormed several neighborhoods of the city of Nablus, arresting four Palestinians.

According to local sources, among those detained is Iyad Al-Nabulsi, the brother of resistance leader Ibrahim Al-Nabulsi who was killed earlier this year.

The intensified raids come just days before Israel holds its fifth round of elections in four years, for which far-right figures have been leading in the polls.

Turnout for these ballots by the Arab-Israeli minority – who make up about 20 percent of the country’s population – is expected to be historically low as a result of decades of broken promises and rampant discrimination.