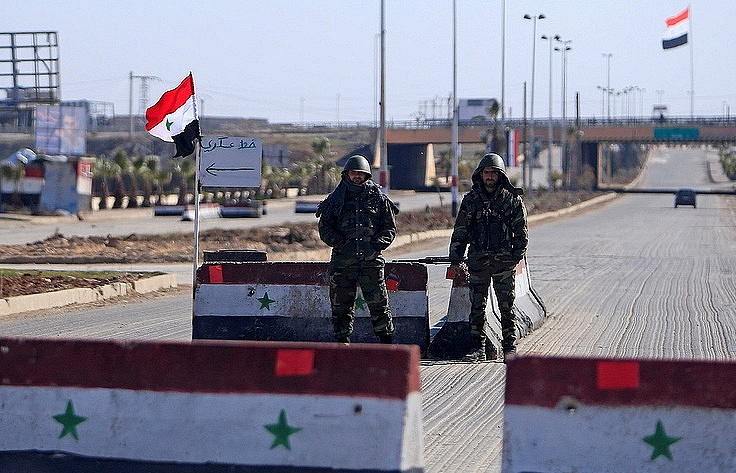 On 2 November, the Syrian Arab Army (SAA) soldiers blocked a convoy of US soldiers in the northeastern governorate of Hasakah, forcing them to return to their illegal base.

A video circulating on social media showed a long column of US troops, consisting of eight armored vehicles, which were stopped at a Syrian army checkpoint near Kawkab mountain, 15 km to the northeast of the Hasakah provincial capital.

According to local sources, the government troops stationed around the Kawkab Mountain, which hosts several army bases, prevented the occupation from penetrating an area under the control of the Syrian government.

The US troops were subsequently forced to turn around and return to their destination, with no reports of clashes or injuries.

Similarly, on 24 October, a checkpoint of the Syrian army intercepted five armored vehicles of the US occupation while passing through the Dmeikha al-Sagheera area, southeast of Qamishli city, forcing them to retreat and leave the area.

However, Washington’s troops continue their oil trafficking operations in the embattled country, smuggling natural resources, estimated at billions of dollars, out of the country. The US soldiers also receive protection from the Syrian Democratic Forces (SDF), which clear the transport routes from Syria to the Iraqi border.

Earlier, sources in Hasakah said a convoy of 22 tankers belonging to the US occupation, loaded with stolen Syrian oil and wheat, left Syria through the illegal al-Waleed border crossing towards Iraqi territory.

The US military has long stationed its forces and equipment in northeastern Syria, with the Pentagon claiming that the deployment is aimed at preventing the oilfields in the area from falling into the hands of ISIS terrorists.

Damascus sees the deployment as a means to plunder the country’s natural resources. Former president Donald Trump repeatedly admitted that US forces were stationed in the Arab country to plunder its oil.

On 22 September, China called on the US to stop plundering Syria’s national resources and respect the sovereignty and territorial integrity of the Arab country.