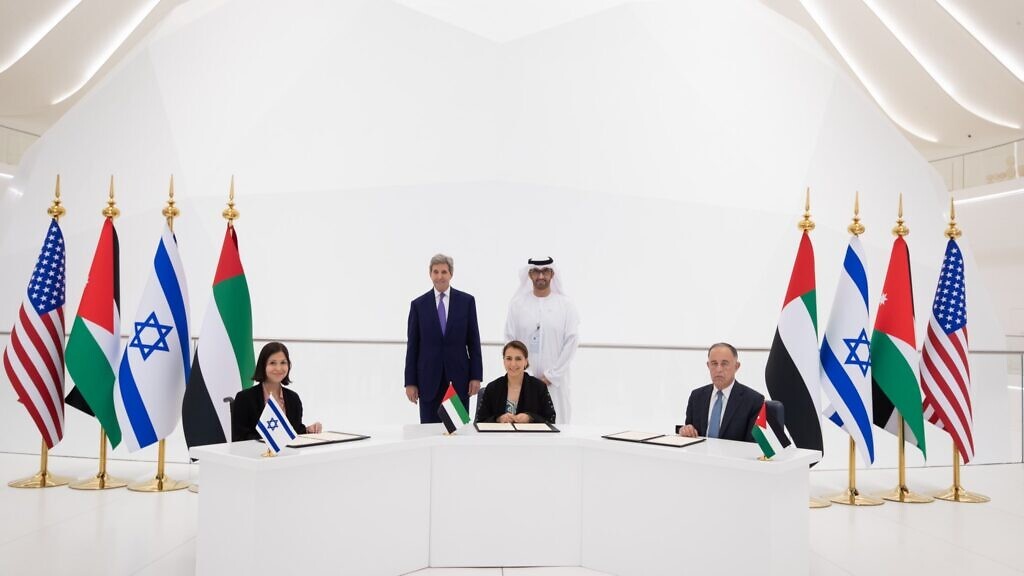 On 8 November, Jordan and Israel renewed a memorandum of understanding (MoU), which obligates Jordan to provide Israel with solar energy, and Israel to provide Jordan with desalinated water. The MoU was brokered by the UAE.

The MoU was signed during the UN COP27 climate conference in the Egyptian resort of Sharm el-Sheikh and in the presence of US climate envoy John Kerry.

The Jordanian Minister of Water and Irrigation, Muhammad Al-Najjar, the UAE Minister of Environment and Climate Change, Maryam Al-Muhairi, and Israeli Minister of Regional Cooperation Issawi Freij signed off on the MoU.

According to Israel’s Energy Ministry, the signing of the MoU expresses a shared desire between Israel, the UAE, and Jordan, to deal with the climate change issue via cross-border operations.

The last time the three parties met was on the sidelines of the Dubai Expo on 22 November 2021, where the three signed a Declaration of Intent, which was considered a stepping stone for potential interconnected and interdependent projects between the three nations.

One of the projects established was a desalination project, which provides Jordan with 200 million cubic meters of desalinated water annually.

Another proposed project under the deal is the building of a solar energy plant in Jordan. The plant, which is to be constructed by UAE state-owned alternative energy company Masdar, is expected to generate 600 megawatts of electricity, which will be exported to Israel.

In addition to paying $180 million per year to the Jordanian government and Masdar, Tel Aviv will construct a desalination plant on its Mediterranean coast to provide water to Jordan.

The deal is one of many agreements that followed the signing of the Abraham Accords in 2020 between Israel, Bahrain, and the UAE.

Meanwhile, officials and delegates from the US, Israel, Bahrain, the UAE, Morocco, and Egypt met in the Bahraini capital of Manama for a continuation of multilateral discussions earlier in June.