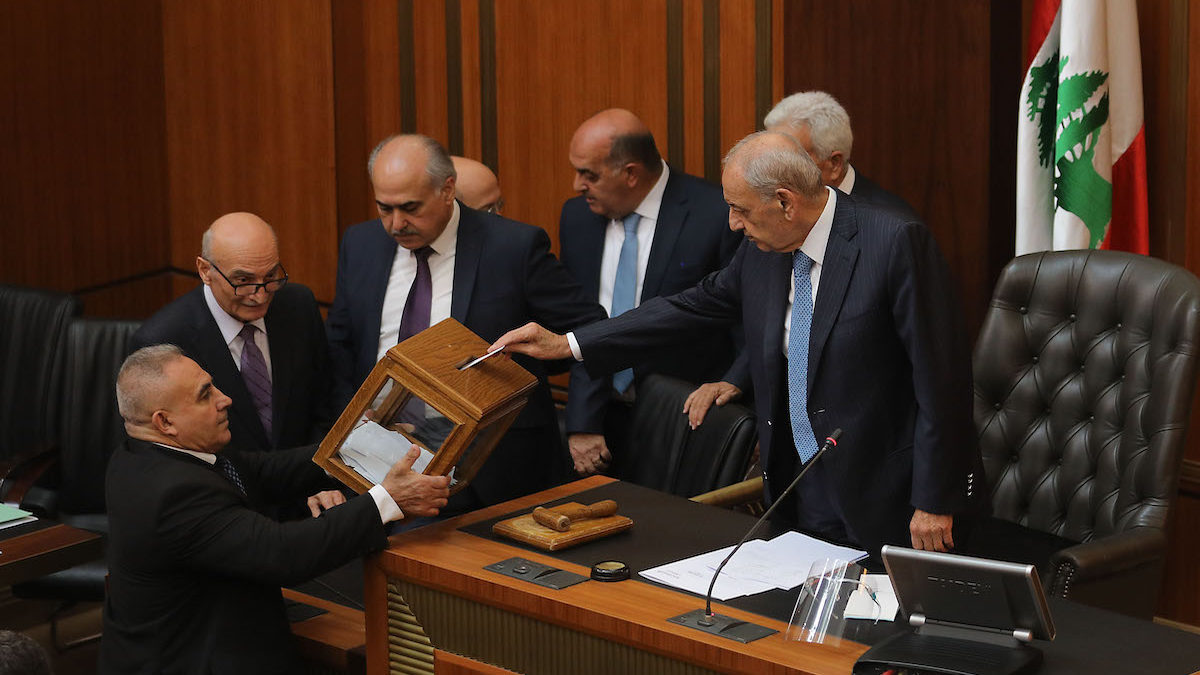 The Lebanese parliament failed to elect a successor to President Michel Aoun for the fifth time, as political parties are still struggling to carry on their duties in light of a parliament with no clear majority.

With only 108 deputies participating in the session, the 14-March bloc and its allies from independent MPs failed in their bid to gather enough votes to elect MP Michel Moawad.

Moawad, a US favorite with longstanding ties to USAID, received a total of 44 votes, short of the 65 needed to be elected president and end the political vacuum in Lebanon.

On the other hand, Hezbollah and its allies in the 8-March bloc voted with blank papers, totaling 47.

“Today’s session is a repetition of an absurd scene of failed initiatives. We need an independent president who can lead us out of the hole we are in and re-establish authority,” said opposition MP Melhem Khalaf, at the end of the voting session.

Behind the scenes, the other prospective candidate is the head of the Marada movement, Suleiman Franjieh, who descends from a Lebanese family with a long history of perusing political careers.

He is generally considered closer to the US and Saudi Arabia than the head of the Free Patriotic Movement and presidential candidate, Gebran Bassil. Nonetheless, his chances were as slim.

Franjieh was then prime minister Saad al-Hariri’s first pick for the presidency in 2016. Hariri considered him the “lesser of two evils,” but eventually voted for general Michel Aoun after a power-sharing deal.

On 3 November, Franjieh accepted Saudi Arabia’s invitation to attend the national conference held on the 33rd anniversary of the Taif agreement. His visit gained notability as it was considered a possible reconciliation with the kingdom ahead of his presidential bid.

“My allies are not against Taif,” said Franjieh in reference to Hezbollah, “so my presence will not affect my relationship with them.”

For Hezbollah, the decision to publicly name a president is still pending a political understanding between Franjieh and Bassil, aimed at avoiding any additional frictions between the allies.

“We do not feel embarrassed [about taking a choice], but rather, we are looking for better dialogue and communication with the aim of reaching a consensus,” said Ali Fayyad, a parliamentarian representing Hezbollah.

Lebanese daily newspaper Al-Akhabr has confirmed that Bassil has agreed to continue supporting Hezbollah by voting with blank papers, but no agreement has been reached on whom to support for the presidency.

Bassil refuses to endorse Franjieh for presidency under the current circumstances, and without this endorsement, the head of the Marada movement has no chance to become president.

Franjieh is neither endorsed by the second largest Christian party in Lebanon, the Lebanese Forces, which is adamant about not allowing any president affiliated with Hezbollah to succeed.

“We will not accept Suleiman Franjieh as president under any circumstances. The matter is not personal, but in politics, he is positioned in the opposing camp,” said Samir Geagea, in an interview with Asas Media.