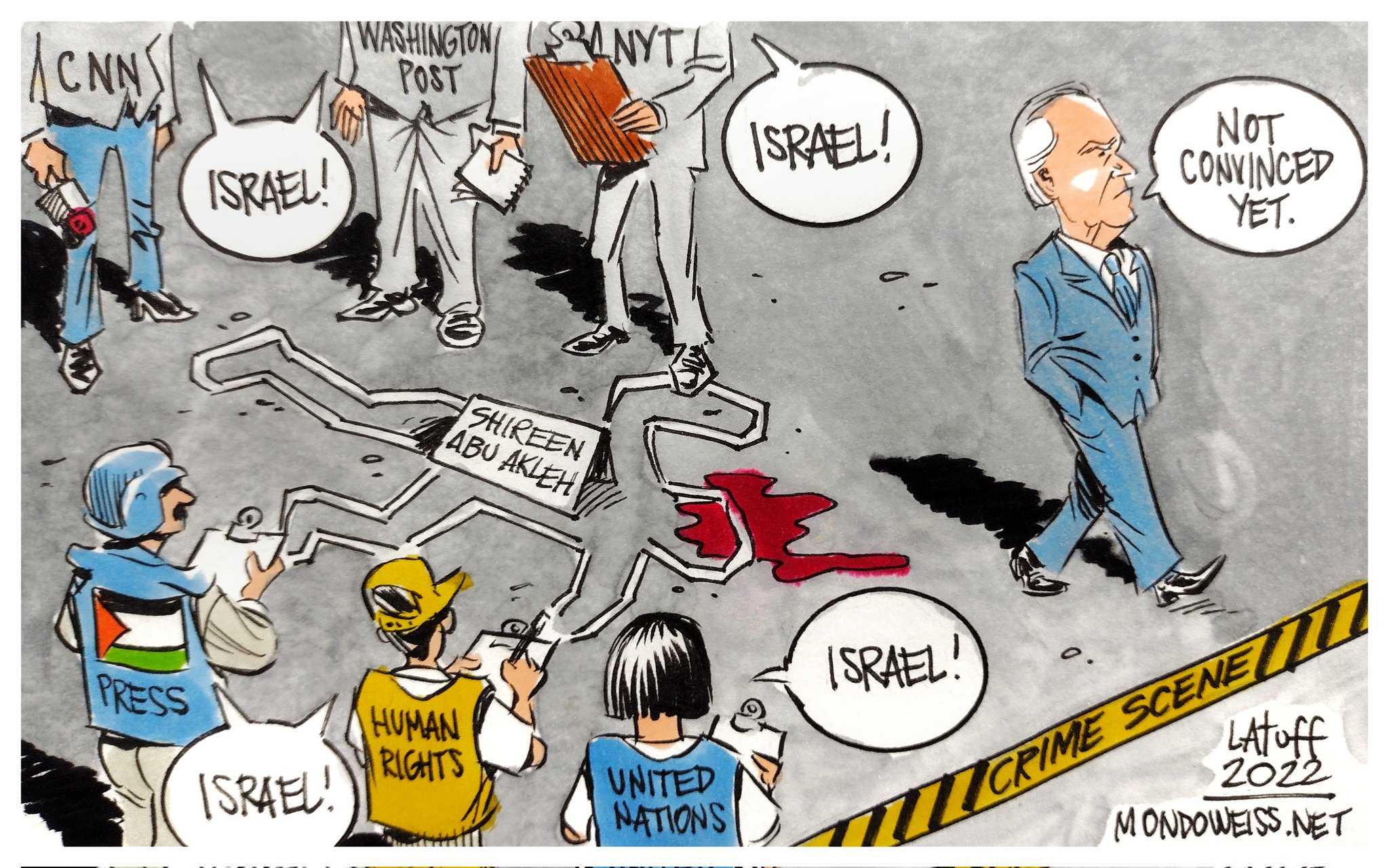 The White House and the US State Department have disowned an FBI investigation into the murder of Al Jazeera journalist Shireen Abu Aqla in a last-ditch attempt to appease “furious” Israeli officials, according to US news outlet Axios.

Axios’ correspondent in Israel, Barak Ravid, claims senior Israeli officials were informed of the FBI probe three days after the 1 November elections, at which point they “urged” the White House to “fix the situation” before the investigation was leaked to the press.

Tel Aviv reportedly warned Washington that once news of the probe became public, the situation “would turn into a bilateral crisis.”

“We spoke to every Biden administration official we work with and made it clear how furious we were,” Ravid quotes a senior Israeli official as saying.

Outgoing Defense Minister Benny Gantz reportedly held a “difficult call with a very senior US official” before the probe was made public, telling them that Israel would not cooperate “in any way with the FBI investigation.”

Outgoing Prime Minister Yair Lapid echoed the same sentiment, saying: “Our soldiers will not be investigated by the FBI or by any other foreign country or entity, however friendly it may be. We will not abandon our soldiers to foreign investigations.”

For their part, US officials told their irate Israeli counterparts that the White House and the State Department were not part of the decision-making process of the Department of Justice (DOJ), adding that the probe is “an independent decision … [not] motivated by a political decision.”

In May of this year, an Israeli sniper shot and killed Abu Aqla in the occupied West Bank city of Jenin. At the time, the Palestinian-American journalist was wearing body armor clearly labeled ‘PRESS.’

Independent investigations by the UN, human rights groups, and western media outlets have all concluded that Abu Aqla was deliberately shot by an Israeli soldier. Moreover, the investigations show that neither the journalist nor the occupation troops were in an active-fire zone at the time of the murder.

These findings are corroborated by the testimonies of the journalists who were accompanying the Al Jazeera reporter, as well as by the video footage of her murder.

Despite the mountains of evidence, both the US and Israel avoided placing any blame on the Israeli soldiers who fired at the group of Palestinian journalists.

In September, self-proclaimed ‘centrist’ Lapid said in no uncertain terms that he would “not allow an [Israeli] soldier … to be prosecuted just to receive applause from abroad,” before adding that “no one will dictate opening fire instructions to us.”

His statements were made on the heels of a squalid Israeli investigation into the events of 11 May, which concluded that “there is a high possibility that Ms. Abu Aqla was accidentally hit by [Israeli] gunfire fired toward suspects identified as armed Palestinian gunmen during an exchange of fire.”

In July, a US forensic investigation into the murder reached “no definitive conclusion” on the origin of the bullet that killed Abu Aqla, suggesting that gunfire from Israeli positions was “likely responsible.”

A mere two weeks after Abu Aqla’s death, an Israeli soldier shot and killed Palestinian journalist Ghufran Warasneh in Al-Arroub refugee camp, north of Hebron in the occupied West Bank. At the time, Warasneh was headed for her first day at work.