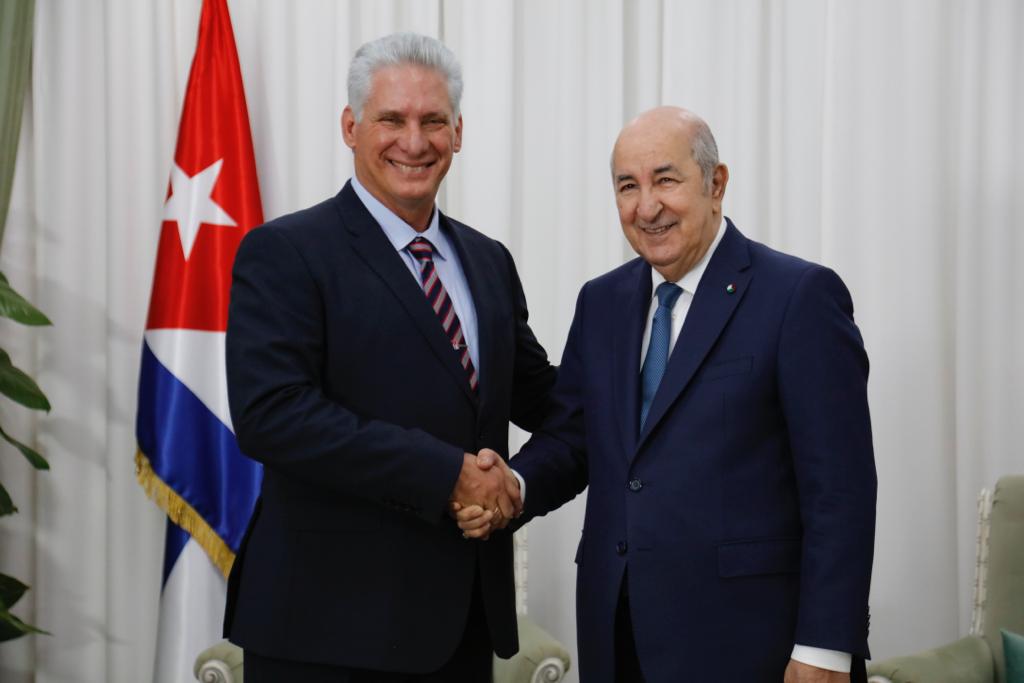 Algerian President Abdelmajid Tebboune met on 17 November with the President of Cuba Miguel Diaz-Canel, at the presidential palace in Algiers to discuss aspects of developing bilateral ties on economic and commercial levels.

After the conclusion of the official talks, both presidents made statements to the press, where they ratified their common will to reactivate economic, commercial, financial and cooperation relations, at the same level of political ties.

Algerian President Abdelmadjid Tebboune told the press, “Algeria feels obliged to engage with Cuba, a friendly nation with which we share a past and present relationship,” according to Zawya news.

“Algeria will grant Cuba a solar power plant and resume the supply of fuel to allow Cuba to restart power plants and stop the power cuts,” he added.

Tebboune also decided to cancel all outstanding interest on Cuba’s debt and postpone its repayment “until further notice” to alleviate the economic impact suffered by the island after the pandemic, according to a report by EFE news agency.

For his part, Cuban president Diaz Canel affirmed that “there are many reasons to feel satisfied with this visit to Algeria.”

Diaz Canel also visited the Martyrs Memorial, which is a historical monument that commemorates the Algerian Revolution (1954-1962) and the national struggle against French colonialism.

Afterwards, the Cuban Head of State visited the National Combatants’ Museum, where he signed the Book of Honor. Diaz Canel acknowledged that “this is a brotherly people, always ready to fight to the death in defense of its independence and sovereignty.”

Algiers and Havana have maintained close ties since Algeria achieved its independence from France in 1962. The bonds have been strengthened over the last year with the creation in February of a joint parliamentary group, according to Zawya news.

The Cuban President kicked off on 16 November a tour of Russia, China, Algeria, and Turkey in pursuit of energy supplies to confront the damage caused by a decades long US blockade on the Caribbean Island.

The situation has led to rolling blackouts and fuel shortages, which have also affected the island’s health sector.