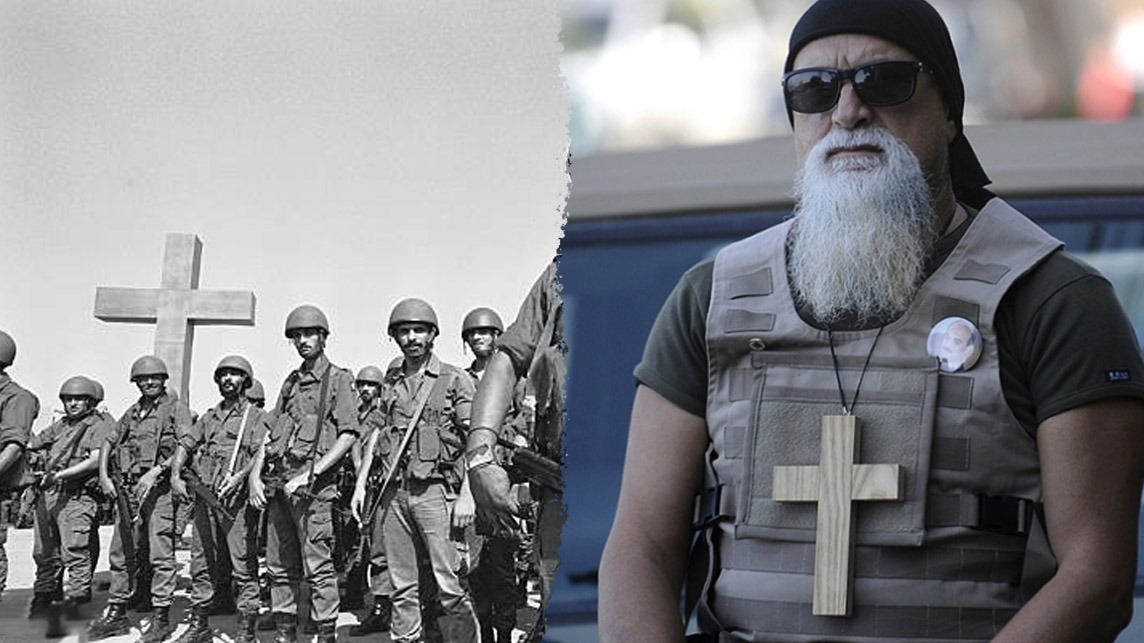 Beirut’s Achrafieh neighborhood has in recent weeks witnessed the rise of a new private militia created by politicians affiliated with Israel and the US, and consisting of members that belong to a neo-fascist organization.

Employing at least 120 young men referred to as ‘guardian angels,’ and with a reported annual budget of $330,000, the so-called ‘Neighborhood Watch‘ patrols Achrafieh’s streets every night from 6pm to 6am bearing torches and batons.

The stated purpose of the group is to “combat crime” in the predominantly Christian and relatively wealthy neighborhood of east Beirut.

Behind the ‘Neighborhood Watch’ initiative is the Achrafieh 2020 civil organization, founded in 2012 by parliamentarian Nadim Gemayel, who is a member of the Kataeb party and the son of the late president, Bachir Gemayel.

At the start of the Lebanese civil war, Bachir Gemayel founded the Christian Maronite Lebanese Forces (LF) militia — now a Saudi-backed political party — who were trained by Israel to confront the Lebanese National Movement (LNM).

Days after Gemayel’s assassination in 1982, members of the LF carried out a brutal massacre in the Sabra neighborhood of Beirut and the adjacent Shatila refugee camp. Over the span of two days, the militia murdered up to 3,500 Palestinians and Lebanese Shia civilians, with the support of the occupying Israeli army which had the area surrounded.

Memories of the civil war and ensuing massacres permeate the formation of Beirut’s new militia, despite the claims by its leaders that the group is “merely filling a gap” left by Lebanon’s underfunded and overstretched police force.

The ‘Neighborhood Watch’ organizers reject suggestions that their militia shares any similarities to the sectarian tactics used during the 1975-1990 Lebanese civil war, when militias patrolled their own areas under the pretext of security. Moreover, organizers disagree with claims their operation could cause further sectarian strife in the crisis-hit nation.

“First, we’re not in a war situation. Second, we are in complete co-ordination with the police, the Mukhabarat (intelligence agencies) and all the necessary authorities that are needed to do our activity.”

He also claims militia members have no powers to ask for people’s documents or names, saying that militia members are simply there to “monitor the neighborhood” and notify the police.

Achrafieh 2020 is collaborating with local security company AMN to “manage logistical services and ensure the welfare of the population.” AMN Security is reportedly in charge of paying the salaries of the ‘guardian angels,’ who are Achrafieh locals earning $200 per month.

According to Nehme, funding for the militia comes from the pockets of the local community, business owners, and the Lebanese diaspora. He also disputes claims that its members all belong to the Kataeb or LF parties, claiming they also cooperate with the Free Patriotic Movement (FPM), a Christian political party allied with Hezbollah.

But despite his claims, one of the most prominent financiers of the ‘Neighborhood Watch’ is Anton Sehnaoui, the Chairman of the Board of Directors of the Societe Generale Bank de Banque au Liban (SGBL).

Sehnaoui is directly linked to the ‘Soldiers of God,’ a far-right Christian militia founded in 2020 by SGBL employee Joseph Mansour.

The Soldiers of God are ideological supporters of the LF and Kataeb parties, and harbor ultra-conservative beliefs. Moreover, they are staunchly opposed to the existence of Hezbollah and the presence of Palestinian and Syrian refugees in Lebanon.

According to an investigation by Lebanese daily Al Akhbar, in recent years many members of the Soldiers of God have been employed by Sehnaoui as security guards for SGBL branches.

An ultra-conservative Catholic who allegedly longs for the days of the Crusades, Sehnaoui saw in the extremists an opportunity to not only protect his assets from desperate depositors who have been forced to “rob banks” to retrieve their own savings, but also as a means to create a private militia that could control Beirut’s Christian neighborhoods.

According to an army intelligence investigation, in October 2021, the Soldiers of God played a part in the shooting of Hezbollah and Amal Movement supporters in the Tayouneh neighborhood of Beirut by LF snipers.

The report not only mentioned the names of individuals belonging to the Soldiers of God who took part in the shooting, but also highlighted their links to Sehnaoui and SGBL.

More recently, the Soldiers of God have been hired by the aforementioned AMN Security in partnership with Achrafieh 2020.

Internal Lebanese security reports speak of this group as a “Christian extremist group that may pose a danger in the future,” although its activity “is still limited to protecting what its regions consider from intruders.”