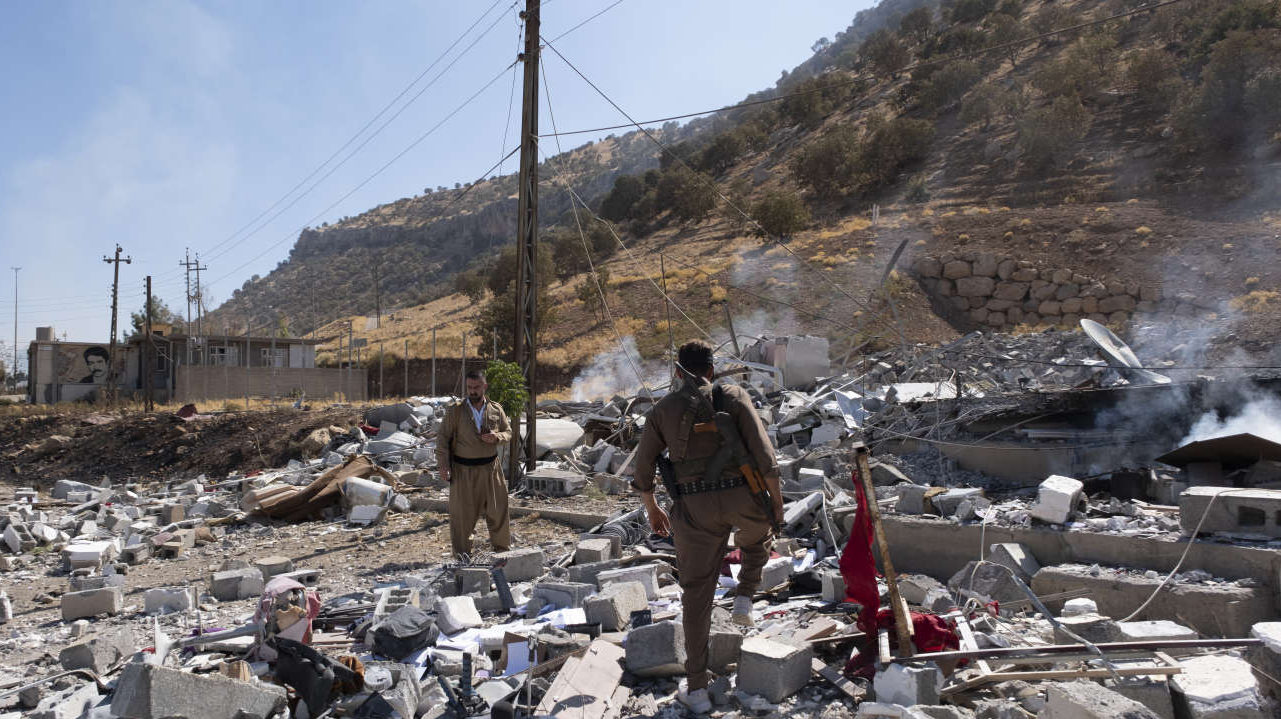 Members of the exiled Iranian separatist militant group, Komala Kurdish party, inspecting the aftermath of an Iranian attack in Zrgoiz on 28 September 2022. (Photo Credit: Ala Hoshyar via AP)

Local Iraqi media report that the commander of the Iraqi border guards has been dismissed from his post, as part of a wide reshuffle of high ranking security officials and in light of the recent cross border attacks by Iran against Kurdish militants.

The reason behind the dismissal was not announced to the media.

However, the Iraqi Security Media Cell stated that changes have been made to adapt to the new security challenges faced by Iraq, and meet “the requirements of raising the level of readiness.”

This corroborates with the decision taken by the Iraqi government on 24 November to redeploy troops to the borders with Iran and Turkey, following recent airstrikes by Tehran and Ankara against Kurdish positions in the Iraqi Kurdistan region.

Iraq intends to deter Iran’s Islamic Revolutionary Guard Corps (IRGC) from any possible ground incursion into Iraq, in light of the recent threat by the IRGC ground force commander, General Muhammad Pakpour, to end the “the infiltration of terrorists” into Iran.

“Some armored units and special forces of the [IRGC] ground forces are currently heading to the border provinces in the west and northwest of the country,” Pakpour was quoted as saying by Iranian media.

Nonetheless, the tensions have settled down after Iraq’s Prime Minister-designate, Mohammed Shia al-Sudani, visited Iran on 29 November to address the situation.

“The Iranian and Iraqi governments believe that security, peace, and stability in the region are very important, and therefore the fight against terrorist groups… is part of the agreements and common will of the two countries,” the Iranian president, Ebrahim Raisi, said at a joint press conference.

As as a result of the meeting, the Iraqi National Security Adviser, Qassem al-Araji, announced on 3 December the intention to create a  joint committee between Baghdad and the Kurdistan region “to reach an understanding with Iran and Turkey about an appropriate end to their attacks.”

On the other hand, the Prime Minister of the Kurdistan Region in Iraq, Masrour Barzani, opted to discuss the tensions with the Deputy Commander-in-Chief of the US-led coalition, Andrew Garner.

According to Kurdish news outlet Rudaw,  Barzani and Garner stressed on the “urgent need” to end the differences between the Kurdistan region and the federal government in Baghdad.

Additionally, the two parties agreed  to strengthen security and military coordination between the Peshmerga forces and the Iraqi army, and exert pressure on Iran and Turkey to end their “aggression on the region.”