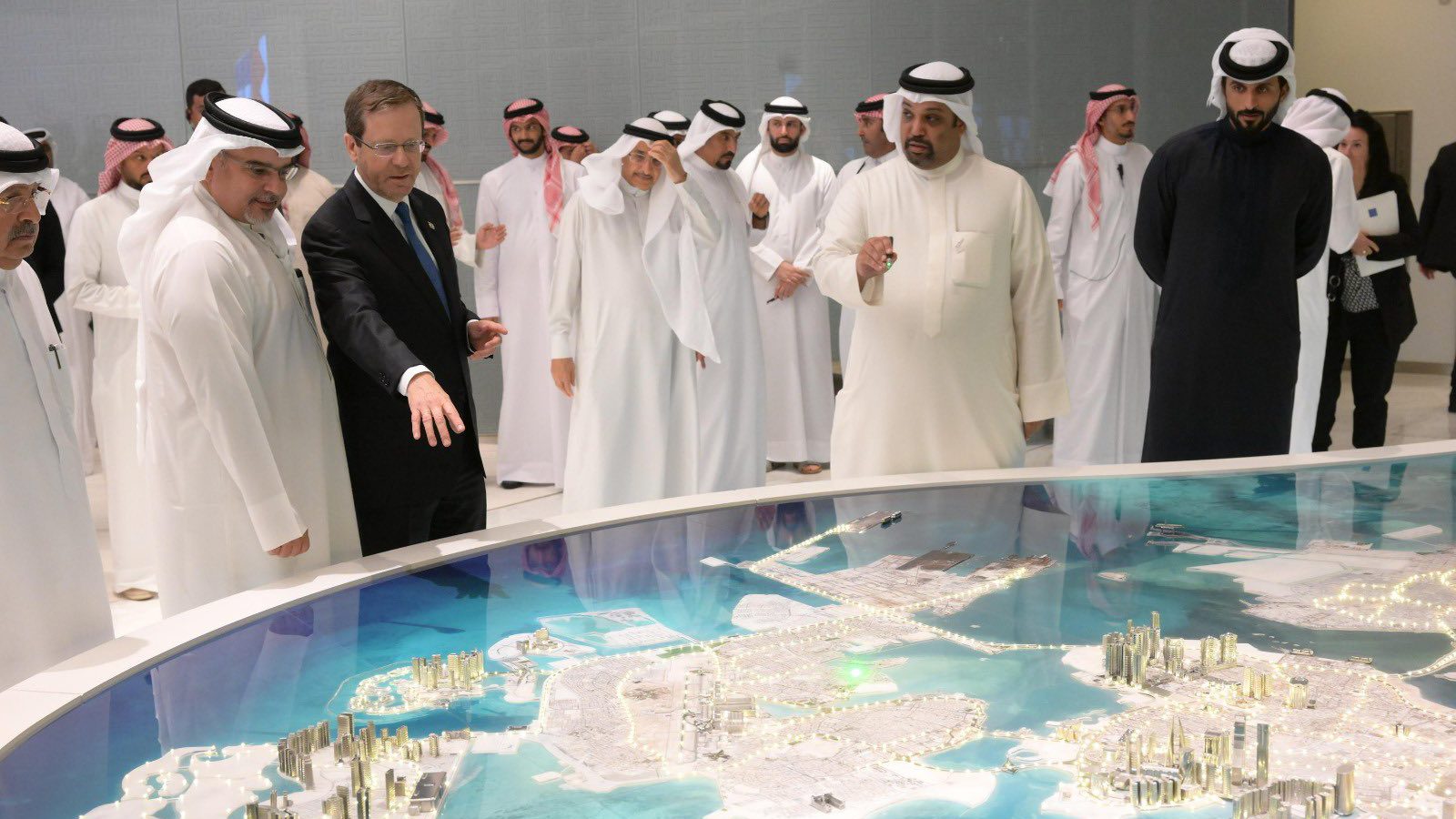 On 4 December, Israeli President Isaac Herzog arrived in the Kingdom of Bahrain for the first time ever visit to the Gulf nation by an Israeli head of state.

Herzog arrived despite daily anti-normalization protests by locals, which reportedly caused him to alter his plans.

During his stay, Herzog met with the King of Bahrain, Hamad bin Isa Al-Khalifa, alongside Crown Prince Salman bin Hamad Al-Khalifa to discuss various topics concerned with mutual security and cooperation, according to Bahraini state media.

Deeply moving to hear Hatikvah, our national anthem, in Bahrain next to His Majesty the King. We must strengthen our alliances for peace and bring more states and nations into the circle of peace in our region. Inshallah! pic.twitter.com/rbPby23sdQ

Additionally, the heads of state explored “ways to encourage communication between the representatives of the private sector in the two countries.”

Herzog was accompanied by a delegation of Israeli manufacturers and investors, who were welcomed by the Bahraini Minister of Foreign Affairs, Abdullatif bin Rashid al-Zayani.

They joined Herzog at the Bahraini Economic forum, where attendees laid plans for the foundation of future investment projects in the kingdom.

“The expanding circle of peace [in West Asia] is highly important, especially amid threats to global and regional stability,” said the Israeli president.

Herzog added that Tel Aviv looks to advance its ties with Manama “in defense, trade, tourism, and environment.”

The Israeli president also visited the Jewish community in Bahrain and held a gathering with its elders. For several months, reports alleged that a Jewish-only neighborhood will be built in the capital.

Today I visited the Bahrain Economic Development Board with a senior economic delegation. Israeli-Bahraini economic cooperation will continue to benefit both our countries through investment, employment, opening up new markets and many diverse areas of business and trade. 🇮🇱🤝🇧🇭 pic.twitter.com/HcCL1Q2eH7

On the other hand, King Hamad informed Herzog of Bahrain’s desire to find “a just, comprehensive, and sustainable peace that guarantees the legitimate rights of the Palestinian people.”

None of this, however, managed to stop hundreds of local Bahrainis from protesting for several consecutive days against the arrival of Israeli officials to the country.

In rare daylight time protests, Bahrainis gathered to express their strong objection of the Israeli occupation of Palestine, and called on prosecuting Herzog for crimes against Palestinians.

Protesters carried banners featuring the slogan “All normalization is an act of treason. Do not come.”

Sheikh Isa Qassim on #Israeli president’s upcoming visit to #Bahrain: Our proud people should say no to the desecration of the land of faith & dignity by the head of the Zionist entity. pic.twitter.com/P9pX4uSQNd

The protests were yet another public showcase of the dissatisfaction of the general population of Arab countries towards Israeli normalization efforts.

People’s anger towards any dealings with Tel Aviv have been made transparent during the FIFA World Cup in Qatar, where Israeli journalists have expressed their discomfort and irritation following the cold reception of Arab fans.

“After a while, we decided to claim we were Ecuadorian when someone would ask us where we were from,” Shechnik goes on to admit, claiming the experience has definitely not been “fun.”