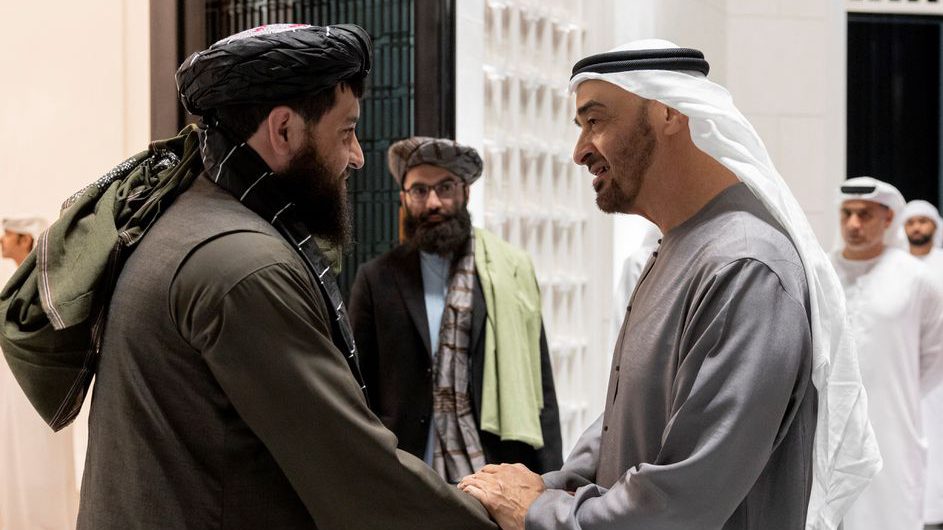 The rare visit tackled the will of both leaders to “strengthen relations and advance the bilateral cooperation between the UAE and Afghanistan,” according to a statement by Afghan’s ministry of defense.

However, the UAE has yet to officially acknowledge the Taliban-led government in Afghanistan as the country’s legitimate representatives.

Despite the non-existing diplomatic ties, the UAE and the Islamic Emirate of Afghanistan (IEA) signed a contract with UAE-based company GAAC Holding to operate the country’s airports and transport infrastructure.

The 10-year-long contract was hailed as a “significant development” by Ibrahim Moarafi, the General Manager of GAAC.

Earlier today, MBZ landed in Qatar for a surprise visit to meet his counterpart Sheikh Tamim bin Hamad Al-Thani, alongside an accompanying delegation.

According to the state-run WAM news agency, the Emirati leader discussed ways to strengthen bilateral ties and advance mutual interests between the two states.

The unannounced historic trip commemorates the first visit by a UAE head of state to Qatar since the official declaration to end the Saudi-Emirati dispute with Qatar in December 2021.

Notably, during the day, Israeli President Isaac Herzog landed in the UAE for his second official visit to the country just hours after leaving Bahrain.

“[This visit is] to upgrade ties between us even more, to strengthen them and to bring more nations into the Abraham Accords,” Herzog reassured Bin Zayed.

For his part, the UAE president told his counterpart that “we built a very strong bridge between the countries that we both can be proud of.”

The UAE and Israel celebrated their two years of peace in September 2022.

We have just landed in Abu Dhabi and were received by UAE Foreign Minister Sheikh @ABZayed. Today I will attend the Abu Dhabi Space Debate, after which I will meet with UAE President Sheikh @MohamedBinZayed at his palace. 🇮🇱🤝🇦🇪 pic.twitter.com/yZ8SVqzNBq