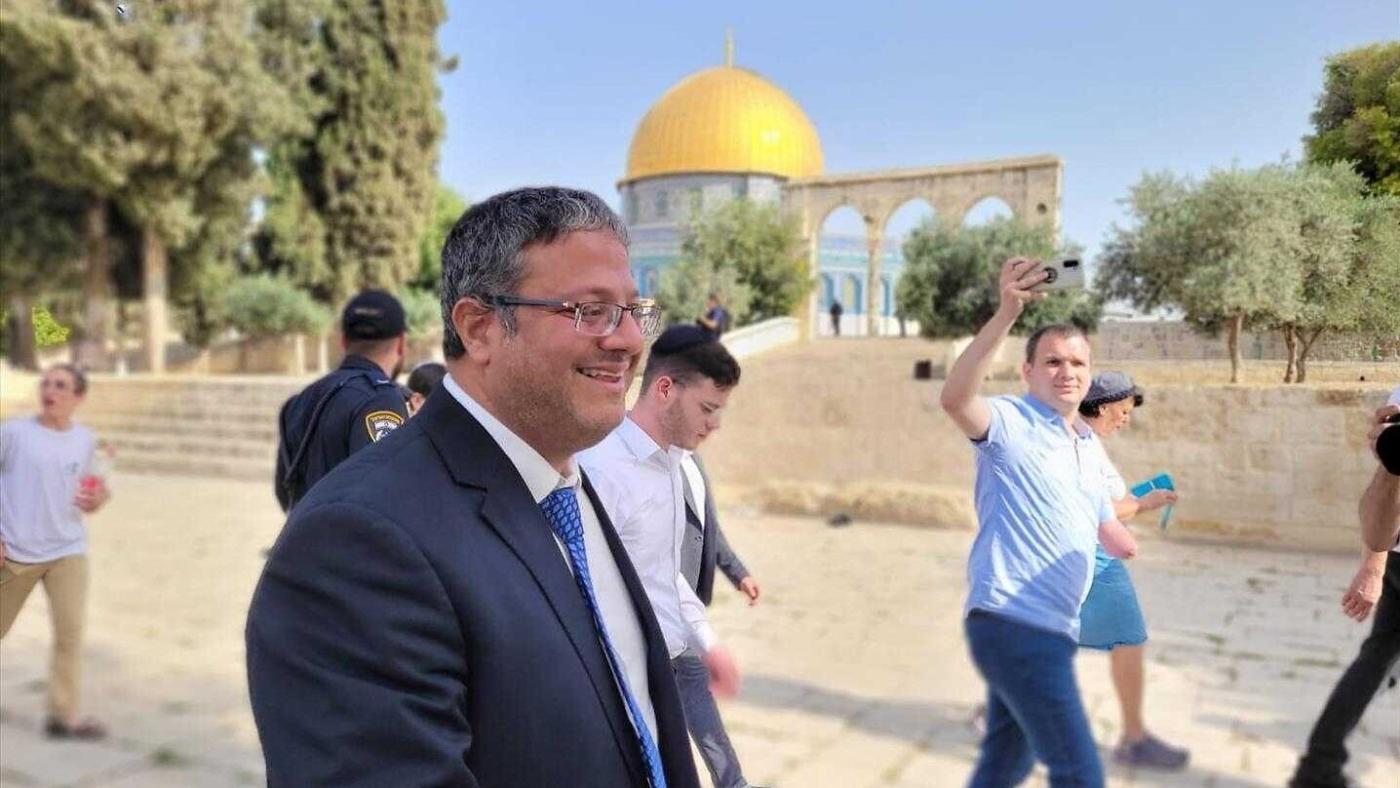 The National Security Minister of Israel’s new government Itamar Ben Gvir followed up on his recently announced plans to storm the Al-Aqsa Mosque, barging into the holy site on 3 January accompanied by a large protection force of occupation troops.

Videos across social media show the Israeli minister touring the mosque’s courtyard with a group of settlers and soldiers.

According to Israeli media reports, Ben Gvir went ahead with the planned incursion despite several stern warnings by Palestinian resistance movement Hamas, which were relayed to Tel Aviv through Egyptian and UN mediators a day earlier.

Hebrew media also claimed that both Cairo and the UN told Israeli Prime Minister Benjamin Netanyahu that it would be difficult to sway Hamas against responding to Ben Gvir’s storming of the holy site. Despite this, Netanyahu reportedly refrained from stopping Ben Gvir from carrying out the incursion.

In a statement released on 2 January, Hamas spokesman Abdel Latif Al-Qanoua vowed that Israel “will bear the consequences” of any escalation or threats against the Al-Aqsa Mosque, and that the Palestinian people “will bravely confront … the occupation’s plans.”

The statement also echoed the words of many who have been saying that Ben Gvir’s actions – and those of the newly elected government in general – represent a “detonator” that could trigger a large-scale, even region-wide war between Israel and the resistance.

Following his raid, Ben Gvir said in response to the resistance: “The Temple Mount is the most important place for the people of Israel … We maintain the freedom of movement for Muslims and Christians, but Jews also go up to the site, and those who make threats must be dealt with with an iron fist.”

“Our government will not surrender to threats from Hamas,” he added.

The extremist politician announced his plan to storm the mosque in late November: “Let everyone know that I will ascend the Temple Mount,” he asserted on 27 November.

Ben Gvir is infamous – even among Israelis – for his highly extremist, anti-Arab, and anti-Palestinian sentiment, driven by his loyalty to the outlawed Kahanist Kach party. The minister has openly called on Israeli police to shoot unarmed Palestinians and was convicted of incitement to racism and belonging to a terrorist group in 2007.

Ben Gvir has stormed the Al-Aqsa Mosque before, prior to his ministerial role in Netanyahu’s government. However, recently, the eyes of the world – including those of Washington – have centered more closely on the extremist makeup of this government and on the extreme, racist, and far-right rhetoric and policy of its members. A sworn-in minister of an internationally recognized government engaging in such an action is expected to draw even more negative attention.

On the same day, the Arab League released a statement condemning the provocative incursion.

As a result of the new government and its policy, resistance activity across Palestine, particularly in the West Bank, has surged drastically. As Netanyahu’s government becomes bolder with its controversial plan for expanded settlements and the annexation of the West Bank, Palestinian resistance is expected to reach unprecedented heights.