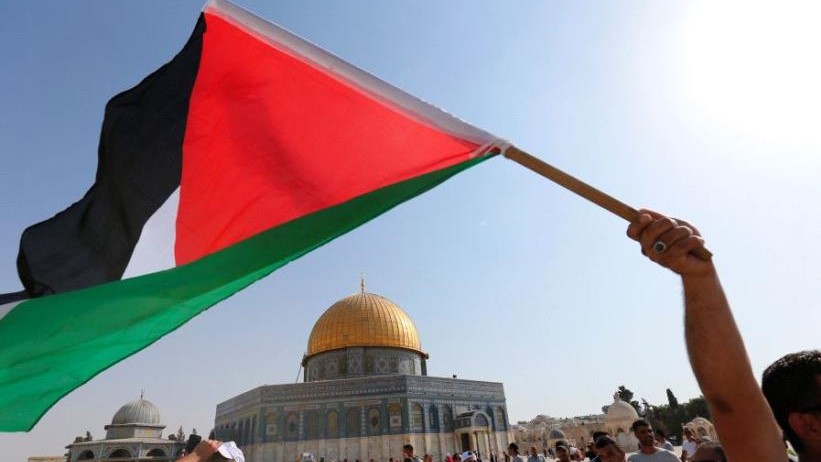 A Palestinian waves their national flag at the Al-Aqsa Mosque compound in occupied Jerusalem on 27 July 2017.
(Photo credit: REUTERS)

On 17 January, Jordanian Ambassador Ghassan Majali was denied access to the Al-Aqsa Mosque compound by Israeli police, claiming that the ambassador needed permission to enter and eventually asking him to leave.

Following the incident, the Israeli ambassador to Jordan, Eitan Surkis, was summoned to the Jordanian Foreign Ministry in Amman and informed that the Israeli government would receive a formal letter of protest, according to WAFA.

The letter affirmed the Jordanian government’s condemnation of Israel’s recent measures and deemed the act an intrusion into the affairs of Al-Aqsa Mosque, the third most important holy site for Muslims.

The letter also serves as a reminder to Israel that the administration department of Awqaf and Al-Aqsa Mosque, which is operated by Jordan, has sole jurisdiction over managing access to the holy site and its affairs.

According to Foreign Ministry spokesperson Sinan Majali, the letter emphasized how crucial it is for Israel, as the occupying power of Jerusalem and its sacred places, including Al-Aqsa Mosque, to uphold its responsibilities under international law, particularly international humanitarian law.

The Waqf, a joint Jordanian-Palestinian Islamic trust, is supposed to have sole control over the mosque’s activities as per a decades-old agreement between Israel and Jordan, which is the custodian of Christian and Islamic landmarks in Jerusalem.

However, Israel’s government has frequently violated the terms of the agreement and allowed settlers and ultra-nationalists to enter without getting permission from the Waqf.

On 3 January, the National Security Minister of Israel’s new government, Itamar Ben Gvir, followed up on his recently announced plans to storm the Al-Aqsa Mosque, barging into the holy site accompanied by a large protection force of occupation troops.

Late in November, the radical politician declared his intention to invade the mosque: “Let everyone know that I will scale the Temple Mount,” he declared on November 27.

The West Bank, in particular, has seen a sharp increase in resistance activities due to the new government’s policies. Palestinian resistance is anticipated to reach previously unheard-of heights as Netanyahu’s administration grows more adamant about annexing the West Bank and implementing its divisive settlement expansion agenda.