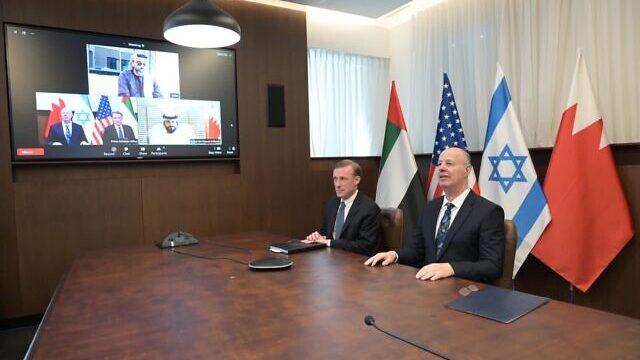 As the Biden administration seeks to increase the number of Arab states normalizing relations with Israel, the national security advisors of the US, UAE, Bahrain, and Israel gathered on 19 January to discuss strengthening regional integration.

The conference was virtually attended by the Sheikh of Bahrain, Nasser bin Hamad Al Khalifa, and the United Arab Emirates, Sheikh Tahnoun bin Zayed, as well as National Security Advisor Jake Sullivan, who is in Tel Aviv, and his Israeli counterpart, according to Al-Arabiya news.

They emphasized their desire to deepen and broaden the progress made since the Abraham Accords, the Trump administration-brokered peace deal.

However, last December, Oman’s parliament voted on a draft amendment to broaden a law banning relations and contacts with Israel, two years after the US-brokered normalization agreements between Tel Aviv and four Arab countries.

Around 86 members of the Consultative Assembly decided to expand the first section of its anti-Israel boycott law to cover any business dealings with private and public figures in sports, culture, and arts.

Assembly Vice-President Yaaqoub al-Harethi explained that the amendment would “broaden the criminalization and extend the boycott of Israel,” according to the WAFA news agency.

Omani law already prohibits people from communicating with anyone headquartered in Israel for any reason, either directly or indirectly, through a third party.

Meanwhile, the far-right majority government of Israeli Prime Minister Benjamin Netanyahu “would not stand in the way” of efforts to normalize ties with Saudi Arabia, Hebrew daily Yediot Aharonot reported on 25 December.

The report claims that if normalization were on the table, Netanyahu would consider suspending the de-facto annexation of illegal settlements in the occupied West Bank.

As part of a last-minute deal to form his sixth government with the backing of Jewish supremacist groups, Netanyahu agreed to officially authorize illegal settlements in the occupied West Bank within 60 days of taking office.

Israel has illegally expanded its territory since the 1967 Arab-Israeli war and built settlements in the occupied West Bank and East Jerusalem for over 700,000 settlers, clearly violating international law.