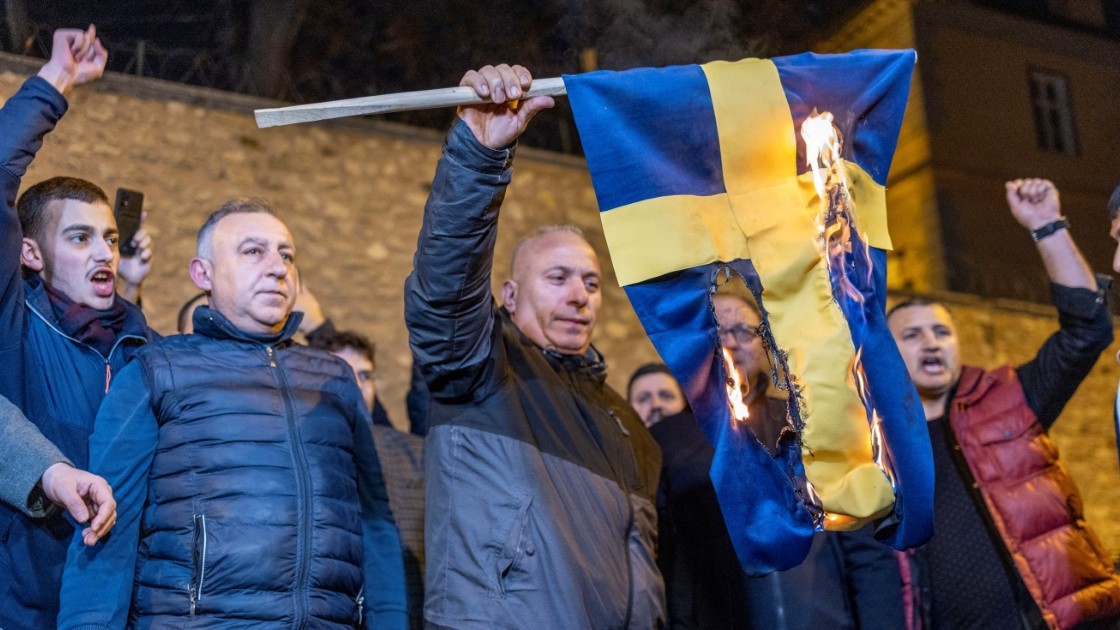 Thousands of protesters gathered on the streets of Turkiye on 24 January, raising anti-Swedish slogans. The protests, held in front of Stockholm’s embassy in Ankara, were organized to condemn the public burning of the Quran in Sweden a few days prior.

The protesters denounced the Swedish government, accusing it of supporting “Islamophobia” under the guise of freedom of speech, for allowing the Quran burning to take place. One of the common banners held up during the demonstrations read, “We condemn state-sponsored Islamophobia in Sweden.”

The 21 January burning of the Quran was carried out by Rasmus Paludan, leader of the far-right Danish political party Hard Line, in front of the Turkish embassy in Stockholm. Paludan also holds Swedish citizenship. Three people were injured when officers fired warning shots at rioters.

Turkiye condemned the Quran burning, with the foreign ministry stating that “We condemn in the strongest possible terms the vile attack on our holy book.”

Tens of videos of the protests circulated on social media, with many of the demonstrators calling for the boycott of several Swedish brands such as H&M, IKEA, Skype, Volvo, and Ericsson.

Dozens of Iraqis protested in front of the Swedish embassy in Baghdad; however, Iraqi security forces took measures to prevent civilians from approaching it too closely. A similar incident occurred in Jordan’s capital.

The Turkish government canceled the upcoming visit of the Swedish minister of defense to Ankara in protest of the Quran burning.

The visit was set to revolve around Turkiye’s veto of the Scandinavian country’s bid for NATO membership. Ankara has delayed approving Sweden’s proposal over Stockholm’s alleged ties to the Kurdistan Worker’s Party (PKK), a militant group fighting for Kurdish rights in Turkey, and its Syrian offshoot, the People Defense Units (YPG). Both groups are considered terrorist organizations by Ankara.

This situation came a week after the Turkish government criticized the decision of the Swedish Public Prosecutor’s Office not to investigate a protest in Stockholm in which an effigy of Turkish President Recep Tayyip Erdogan was hung from the legs.

The Turkish authorities opened an inquiry into the incident in Sweden, with Turkish media claiming the act could affect Ankara’s approval of Sweden’s bid to join NATO.