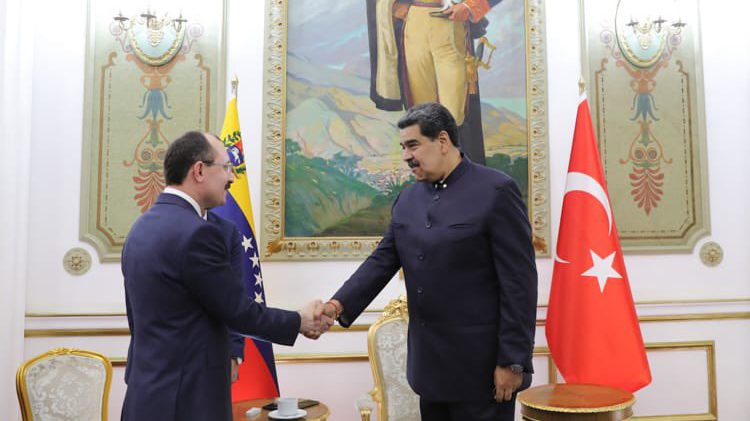 Venezuela and Turkiye signed a Memorandum of Understanding (MoU) in Caracas on 25 January to outline their economic cooperation in the fields of trade, investment, and economic development, according to Sputnik.

“We have approved ambitious goals in trade and agreed on progress in the integration of investments and industrial economic development of our countries,” Venezuelan President Nicolas Maduro said after he met with Turkish Trade Minister Mehmet Mus.

The meeting between the president and the Turkish trade minister was also joined by Tareck El Aissami, the Venezuelan Petroleum Minister, who announced that Venezuelan exports to Turkiye increased by 25 percent in 2022, reaching a total of $691 million.

The two countries also made new arrangements for commercial travel, increasing flights from Caracas to Ankara.

Following Venezuela’s isolation from the US and its western allies, Venezuela and Turkiye have increased their economic and diplomatic ties.

In June 2022, Venezuelan President Nicolas Maduro kicked off his regional tour in Turkiye, where he met with his Turkish counterpart Recep Tayyip Erdogan.

“I appreciate the warm welcome and affection they have shown us. I am sure that we will consolidate the ties of union and cooperation between our peoples,” Maduro said ahead of the meeting.

Ankara’s top diplomat has said he wants trade between the two countries to reach $1.5 billion annually, up from some $850 million at the time.

Following the meeting between the two heads of state, Erdogan called Venezuela a “very important partner in Latin America and the Caribbean.”

“We are friends in bad times,” he said. “We have an exemplary friendship.”

The Turkish leader also spoke about the endurance of Venezuela in the face of many economic embargoes.

“In overcoming them, President Hugo’s brave and courageous leadership has made a great contribution, as did Simon Bolivar and Hugo Chavez.”

Caracas and Ankara have signed 20 bilateral agreements, including recent tourism deals covering 2022 to 2024.