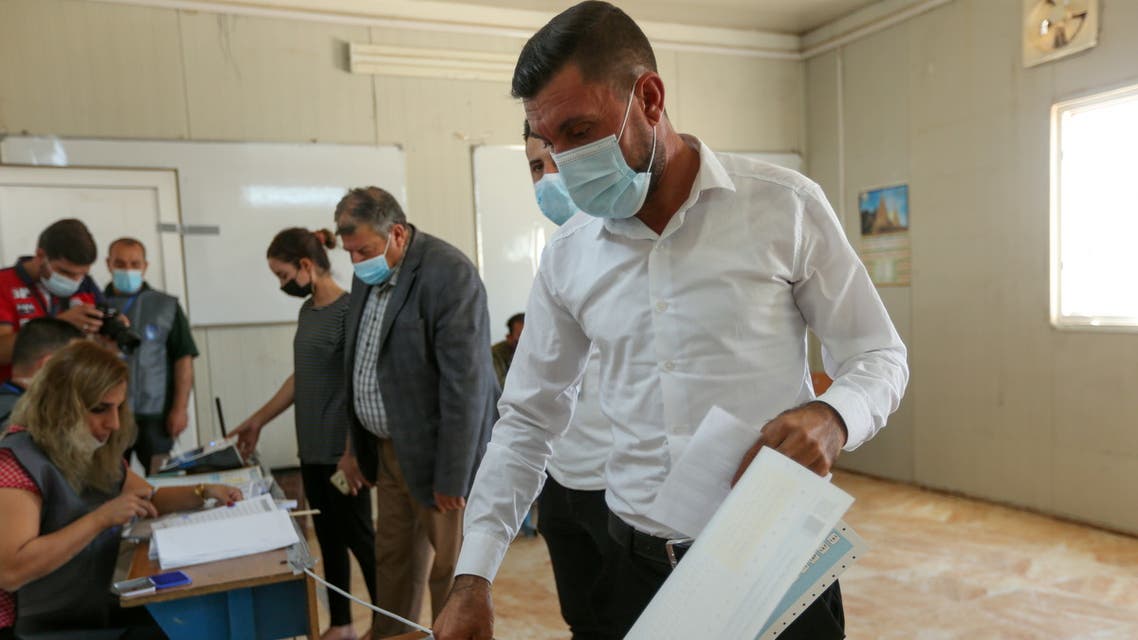 A displaced Yazidi man casts his vote two days ahead of Iraq’s parliamentary elections in a special process, at the Sharya camp in Duhok, Iraq. 8 October, 2021. (Photo credit: Reuters)

Iraqis are headed to the polls on 10 October for parliamentary elections, as citizens call for better economic conditions as well as an end to the foreign occupation of their country.

More than 3,200 candidates are contesting 329 seats in parliament. Nine seats are reserved for minorities, with 67 candidates vying for those spots.

A close race for the top job is expected between the Saairun party of prominent Shia cleric Moqtada al-Sadr and the Fatah Alliance led by Hadi al-Ameri, as both parties won the most seats during the last elections.

“Tomorrow’s elections are one of the most important electoral processes in the modern history of Iraq, and they come during delicate circumstances and a defining national moment,” President Barham Salih said in a televised speech on Saturday.

The early elections, originally slated for 2022, are being held in response to mass protests that started in 2019 against corruption, unemployment and crumbling public infrastructure.

In response to these mobilizations, former Prime Minister Abdul Mahdi resigned in November 2019, and was succeeded by Mustafa al-Kadhimi, who promised early elections and a reform of the electoral law.

Additionally, the United Nations mission in Iraq confirmed that a group of 130 international experts and around 600 supporting staff will be monitoring the ballots.

But many have raised concerns about the level of participation these elections will see, as during the country’s last polls in 2018 less than 40 percent of eligible voters participated.

These elections also come at a critical geopolitical period for the country, as just days ago US troops began their withdrawal from Iraq after 18 years of occupation.

Earlier this year, Baghdad and Washington agreed on the complete withdrawal of US combat troops by 31 December.