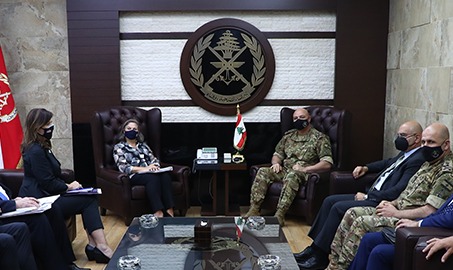 It was not an ordinary day in Beirut; more like a rehearsal of a civil war between Muslims and Christians. Armed men suspected of belonging to the Christian, far-right Lebanese Forces (LF) political party opened fire on peaceful demonstrators, consisting mostly of Muslims supporting Lebanese resistance group Hezbollah and the Amal Movement, along with Christian supporters of the Marada party.

At least five martyrs and more than thirty wounded were counted in the aftermath of the bloody events on Thursday.

At 10 am that fateful morning, protestors gathered to participate in a peaceful sit-in in front of the Palace of Justice in Beirut. They were there to protest the judicial direction of Tarek Bitar, the lead judge investigating the Beirut Port explosion of August 2020.

There are many accounts of what happened earlier that day. All details were discussed in a meeting of the Central Security Council at Lebanon’s Ministry of Interior, in the presence of the leaders of the security services, who unanimously agreed that members of the Lebanese Forces had started the shooting.

One of the attending officers revealed details about snipers spread out across the roofs of surrounding buildings in advance of events, then opening fire on demonstrators as they passed through the Tayouneh roundabout.

A security source told The Cradle that armed LF assailants had already been deployed in the streets of the adjacent Ain al-Remmaneh neighborhood since the early hours of the morning, in preparation for the confrontation.

He revealed that while demonstrators were passing through the Old Sidon road, there were provocations by a gathering of forces in Zaroub Al-Farr School, who threw stones at the marchers before LF militia men opened fire on them.

The security source confirmed that LF members were armed with weapons, which explains the large number of casualties among protestors at the beginning of the incident. In other words, the LF shooters came prepared for an armed confrontation – well before Amal Movement and Hezbollah loyalists brought in their weapons and armed clashes took place.

Military sources told The Cradle that the Lebanese army raided a number of buildings from which the shooting was directed, but that no one was arrested.

Contradictions in the army’s statements over the course of the day were noted with suspicion by numerous observers. The army’s first statement was issued before a meeting with US Deputy Secretary of State for Political Affairs Victoria Nuland, saying “as they headed to the Al-Adliya area, the protesters were fired upon in the Tayouneh-Badaro area.”

A second army statement issued after the Nuland meeting said that when protesters headed to the Al-Adliya (Palace of Justice) area for their sit-in, there was a ‘dispute’ after which an ‘exchange of fire’ took place, which led to the killing of a number of citizens and the injury of others.

The American, wielding her scepter, succeeded in getting Lebanon’s army to convert the protesters from ‘victims who were shot’ as they headed towards the sit-in, to ‘rioters who fell during the crossfire.’

During a press conference in Beirut today, Nuland announced that “the United States will provide an additional $67 million in support to the Lebanese army.”

The extent of the security chaos that broke out was also notable, even though the army, its intelligence branch, and the rest of the security services were aware that tensions in Lebanon had reached their limits. Security services had blocked the entrances to Ain al-Remmaneh the night before the sit-in and had deployed their forces along the Old Sidon road.

They already were in possession of information about the presence of groups preparing to clash with demonstrators. Threats had been posted by various politically-connected individuals on social media, asking their followers to ‘await the lesson that the demonstrators will learn.’