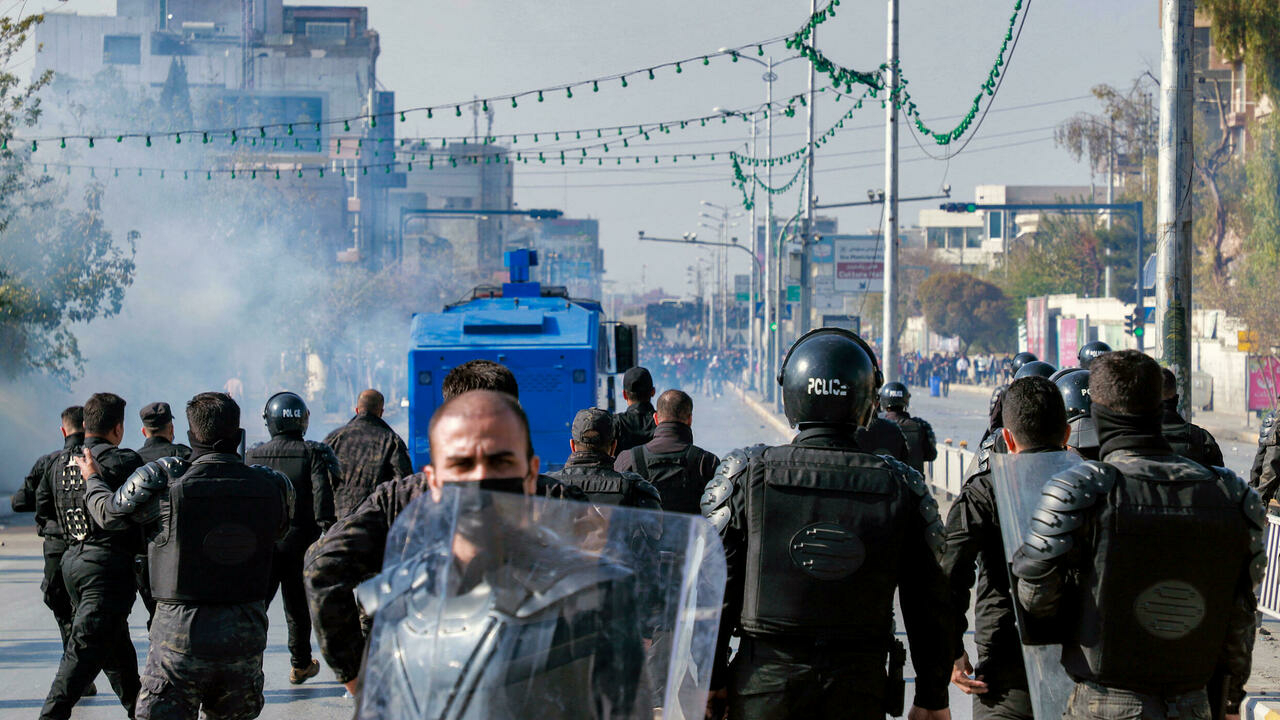 Iraqi riot police attempt to stop a protest by university students near the university in Sulaimaniyah in Iraqi Kurdistan. (Photo credit: Shwan Mohammed/AFP)

Protests continued for a third day in a row on 23 November in the Iraqi Kurdistan Region, as thousands of university students took to the streets of Sulaymaniyah to demand that the government resume their monthly stipends.

Security forces were heavily deployed to stop the students after they blocked the main Kirkuk–Sulaymaniyah road before heading towards the center of the city.

According to local reports, once the students reached the headquarters of Sulaymaniyah’s ruling party, the Patriotic Union of Kurdistan (PUK), they were confronted by more security forces firing rubber bullets, teargas, and water cannons to stop them from proceeding further.

A fire was reportedly set to the PUK headquarters, as angry demonstrators were seen throwing rocks at the windows of the building.

Protests also spread to other cities in Iraq’s Kurdistan on 23 November, with students from Halabja, Kalar, Koya, and Erbil taking to the streets.

Speaking to an Arabic media outlet, a protester outside of Sulaimani University said, “I don’t have any hope in the government, but I’m here to ask for what is ours.”

“I was not here yesterday, but after I saw the police using force against students, I decided to join the protest,” another university student told local media.

Anger has mounted among students in the region in recent months, demanding that Kurdistan’s Higher Education Ministry reverse its 2014 decision to cut students’ financial grants.

The regional government used to pay a monthly allowance of 60,000 to 100,000 dinars per student. This was one of the expenses the government cut when it introduced austerity measures, such as slashing salaries to cope with the financial crisis caused by the war with ISIS, low oil prices, and budget disputes with Baghdad.

In response to the protests, Kurdistan’s Minister of Higher Education and Scientific Research, Aram Mohammad Qadir, said that student demands are “plausible and justified,” and adding that he has been working on resolving the issue “since his first day in office.”