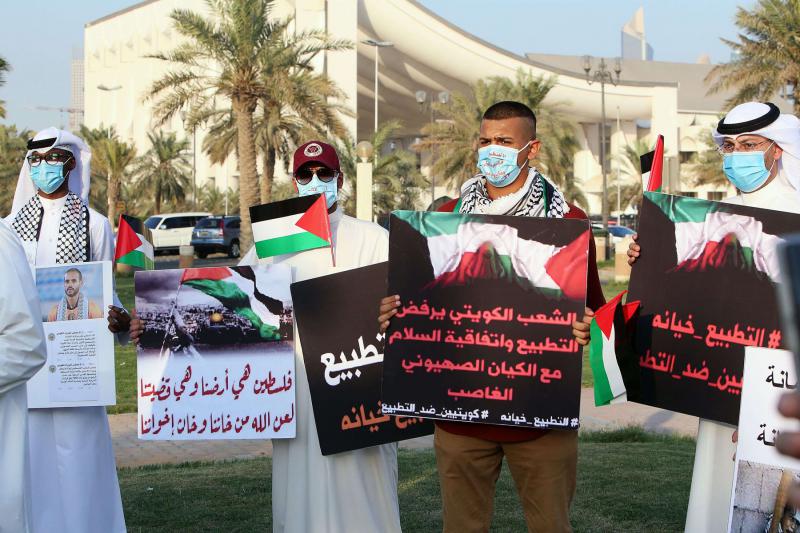 Kuwaitis protest against normalization with Israel in front of Kuwait’s national assembly in Kuwait City on 22 September, 2020. (Source: AFP)

In an unusual move, Kuwait has banned the passage of commercial vessels or vehicles carrying Israeli goods into its territory.

The Kuwaiti ban was announced on 4 December by the Kuwaiti Minister of Public Works and Minister of State for Communications and Information Technology Rana al-Faris.

The ban was applied days after Kuwait repeated its support for Palestine, slamming the storming of the Ibrahimi Mosque in Hebron (Al-Khalil) by Israeli president Isaac Herzog.

The appearance by Herzog to the Islamic holy site was condemned on 29 November by the Organization for Islamic Cooperation (OIC), which described the action as a “provocation of Muslim sensibilities.”

Under the order, ships carrying goods to or from what is considered occupied Palestinian territories are barred from receiving entry permits, even if the goods pass through Kuwait and are destined for another country.

The new Kuwaiti law stipulates that individuals and businesses cannot have agreements with organizations or individuals inside Israel, nor can they make financial or commercial deals with those that have business links to Israel, even if they live outside Israel.

The new law explicitly bans direct or indirect import, trade, or possession of any Israeli goods, commodities or products. In addition, items or goods cannot contain materials from Israeli products.

On 1 December, the Kuwaiti Permanent Ambassador to the United Nations Talal al-Fassam slammed Herzog’s storming of the Ibrahimi Mosque, which coincided with the Jewish festival of Hanukkah, saying the action hurt the sentiments of Muslims worldwide.

During the last 11-day Israeli siege on Gaza in May, the Kuwaiti National Assembly voted on a measure that placed penalizing measures on normalization with Israel.

On 27 May, the Parliamentary Kuwaiti National Assembly passed the measure, which places up to 10 years or life imprisonment for financial, commercial, or other dealings or exchanges with Israel.