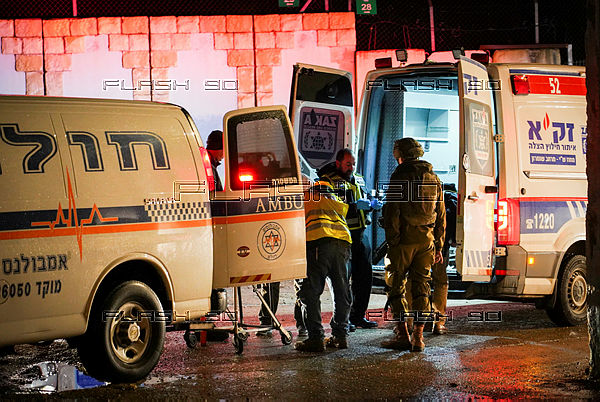 Israeli occupation forces at the scene of a shooting in Nablus, in the occupied West Bank, on December 16, 2021. Photo by Hillel Maeir/Flash90

On 16 December, a shooting outside an illegal Israeli settlement in the occupied West Bank city of Nablus killed one Israeli settler and injured two others.

According to local media outlets, the incident happened as the three settlers were driving out of the illegal settlement. Emergency services said the deceased suffered several gunshot wounds and was pronounced dead on the scene. The other two settlers in the car suffered light wounds after being struck by shards of glass. They were taken to a nearby medical facility.

Palestinian-based WAFA media agency reported that immediately after the incident, hundreds of Israeli soldiers were deployed across the city in search of the shooter. A statement by the Israeli occupation confirmed that three infantry battalions and special forces had been deployed to the city. The occupation army also closed all exits and entrance into the city, leaving thousands of Palestinians unable to leave or enter Nablus.

The report said that, following the incident, groups of Israeli settlers in different illegal settlements across the occupied West Bank gathered on highways to stone and attack Palestinian cars.

According to an Israeli media outlet, the illegal settlement where the incident happened was ‘officially’ abandoned in 2005, but currently hosts an illegal Jewish religious school. The report also said that the occupation’s public broadcaster announced that a group of settlers are planning on erecting new structures at the settlement as revenge for the shooting.

According to Article 49 of the fourth Vienna convention and UN Security Council Resolution no. 2334, all Israeli settlements in the occupied Palestinian territories are illegal and in violation of international law.

Palestinian resistance movements have described the attack as a ”natural response to the crimes of the occupying soldiers and settlers.”

Hamas spokesperson Hazem Qassem said ”this operation proves yet again that our heroic people will continue their struggle until they expel the occupier.”