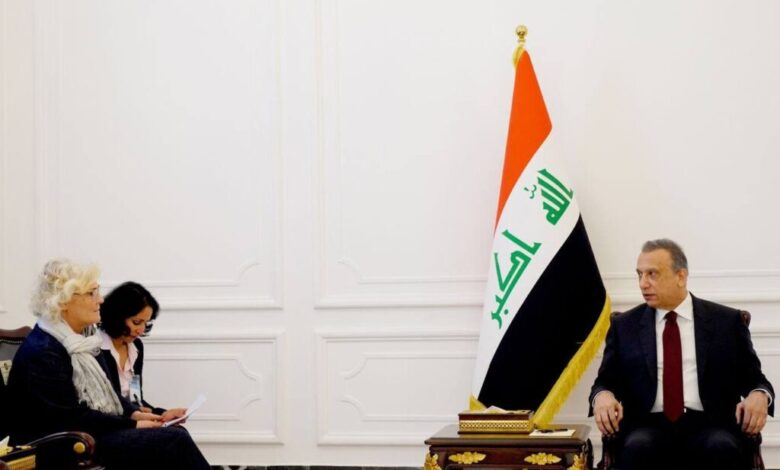 During the meeting the Iraqi premier stressed the importance of bilateral relations between the two countries in various fields, particularly security, military, and intelligence. The prime minister also said Germany has played “an important role” as part of the international coalition fighting ISIS as well as increasing the success of Iraqi security forces.

This “cooperation” will reportedly include supporting, consulting, and training the Iraqi security forces, especially the Iraqi army “in order to strengthen Iraq’s capabilities in protecting its territory and its democratic institutions.”

For her part, the German defense minister praised the advances made by Iraqi government in the fight against ISIS and stressed Germany’s readiness to continue supporting Iraq based on the priorities set by the government.

She then thanked Kadhimi’s government for addressing the plight of Iraqis stranded in the EU’s eastern borders by encouraging them to return to their home.

Later in the day Lambrecht also met with the head of the Iraqi Kurdistan Regional Government (KRG), Nichervan Barzani.

Barzani welcomed the German envoy in Erbil and told her that the war with ISIS is not over and that terrorism in the region is considered a threat to security and stability for Europe and West Asia.

The KRG said in a statement that the meeting focused on Germany’s relations with Iraq and the Iraqi Kurdistan Region, common ground and bilateral cooperation, the latest developments in the fight against terrorism, and the dangers posed by ISIS.

Barzani also offered his congratulations to Lambrecht for the inauguration of the new German government, describing the German defense minister’s visit to Iraq at this stage as “important.”

He also stressed that ISIS threat is not over and that the elimination of terrorism is not only done by military means, but also requires “political action.”