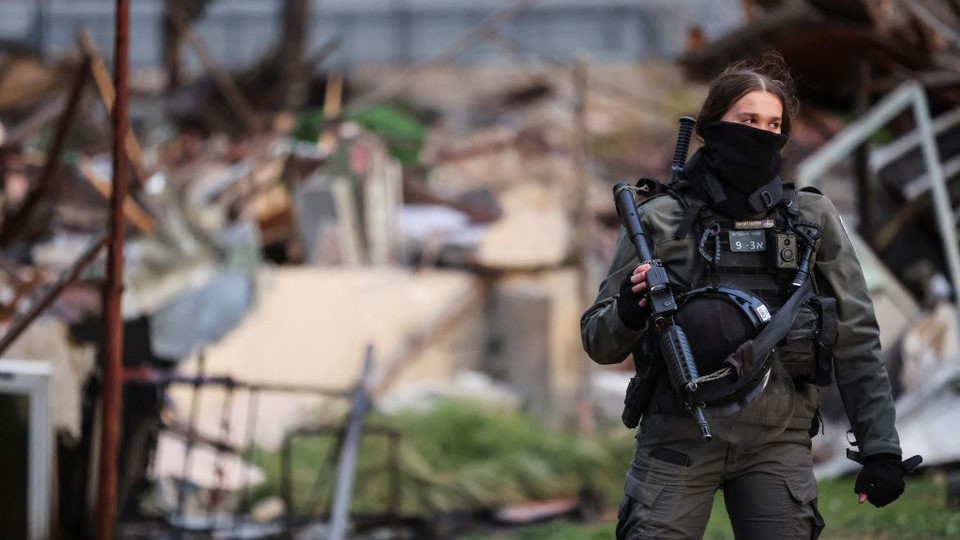 A member of the Israeli occupation police stands guard at the site of a demolished house in the Sheikh Jarrah neighborhood of occupied East Jerusalem. 19 January, 2022. (Photo credit: REUTERS/Ammar Awad)

Early in the morning of 19 January, Israeli occupation forces stormed the home of Mahmoud Salhiyeh in the Sheikh Jarrah neighborhood of occupied East Jerusalem, assaulting and detaining the entire family before bulldozers tore down their property.

Earlier this week, Salhiyeh made headlines after he refused to be evicted from his home and took to the roof threatening to blow it up with gas canisters.

“I will burn the house and everything in it,” Mahmoud Salhiyeh said on 17 January as he stood on the roof of his home. “I will not leave here, only from here to the grave, because this is no life, no dignity.”

But just two days later, occupation special forces raided the Salhiyeh home after cordoning off the area at 3am local time, according to witnesses on the scene.

The family says the Israeli troops barged in while they were in bed, forcing them to leave the house during a rainstorm on one of the coldest nights of this year’s winter season.

The family of 18 has now been rendered homeless.

“They pulled my father out of bed, beat him along with my brothers and cousins,” before arresting them “without giving them the chance to put clothes on,” Yasmeen Salhiyeh, 19, told reporters.

Yasmeen added that Israeli occupation forces fired rubber-coated bullets at activists and journalists who were attempting to reach the scene of the demolition, leading to several injuries.

On top of this, close to 20 other Palestinians, who were holding a vigil in solidarity with the family, were also arrested.

Occupation authorities allege that the six-dunam property (1.5 acres) owned by the Salhiyeh family would be used to build a special needs school.

However, the family maintains that this is an excuse to use the land to expand a nearby illegal settlement at their expense.

Forced displacement in an occupied territory is a violation of international law and a war crime.

A reported 57 percent of all land in occupied East Jerusalem has been expropriated by Israeli authorities, including from private Palestinian owners, for the expansion of illegal settlements.

According to the United Nations Office for the Coordination of Humanitarian Affairs (UN OCHA), at least 280 Palestinian families, including 424 children, are at risk of being forcibly displaced from their homes by Israeli occupation forces.